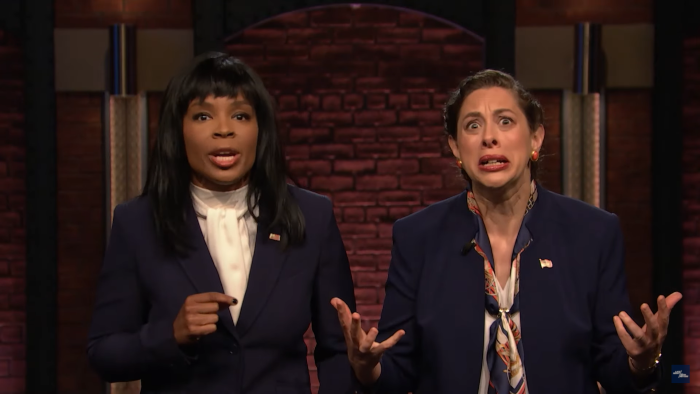 It seems likely that SCOTUS will overturn Roe V. Wade. It’s hard to not feel helpless. After all, this is a decision made by a minority of people that will affect a majority of people. But there is a silver lining! Democrats currently control the House, the Senate, and the Presidency! Surely they will step in and stop this injustice from happening!
Why are you laughing at me?
Oh, that’s right. It’s because Democrats can’t seem to get anything done. They don’t have control over members of their party. Progressive campaign promises are pushed to the back burner or completely ignored. Instead of legislative change, we end up with a bunch of old, white people kneeling while wearing Kente cloth.

Well, the folks at Late Night with Seth Meyers decided to skewer our feckless leaders, and skewer they did! Amber Ruffin and Jenny Hagel (two of the amazing minds behind The Amber Ruffin Show) stepped in to portray two Democratic reps. To quote the parents of one ned Flanders, these two “have tried nothing and (they’re) all out of ideas!” It felt really good to laugh at Democratic ineptitude. It also hurt like hell.

This bit was also another prime example of the wonders Ruffin and Hagel can produce. They are effective and smart and do their jobs to the best of their abilities. If only I could say that about a certain political party.


← 'We Own This City,' 'Made For Love,' 'Ozark,' And More On Podjiba! | Ross From 'Friends' Really Did Become a Complete Sociopath →