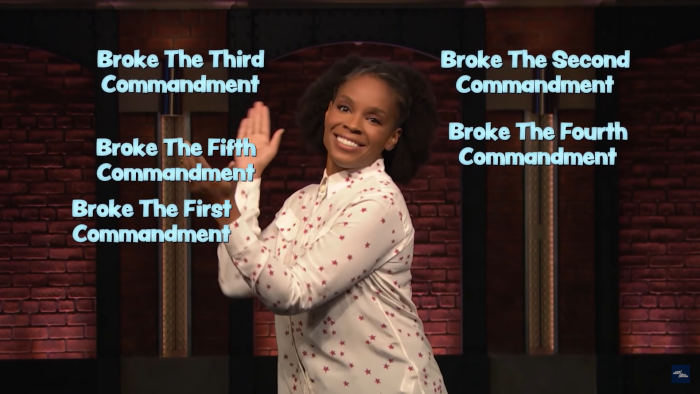 I want to apologize upfront for making you even read this motherf***er’s name. I don’t want to think about him either! It feels like only moments ago that we had to hear the former president’s name every damn day. Surely a respite is in order! However, as much as I hate Donald Trump, I love Amber Ruffin more. The hilarious host appeared on Late Night with Seth Meyers last night to discuss claims Trump has made about religion. It was one of the funniest sketches I’ve seen in some time.

Trump claims that he has done more for Christianity, maybe even religion itself than anybody. This bout of hyperbolic mouth diarrhea should come as a surprise to no one. The dude spouts nonsense like this regularly. What is surprising is that Amber agrees with him! Just not in the way you might think. She does think that Trump has done more for religion because of all the sins!

It wouldn’t be an amazing Amber Ruffin sketch without some groovy music. What we get is Amber, dancing to some bossa nova, pointing to various Trump sins spelled out around her. The sins get worse and worse until Amber’s smile fades away in a moment of frustration that most of us have felt. The progression from happy, smiley Amber to “stuck in an existential crisis” Amber was an absolute joy to watch. I cackled several times. Cackled!

This was all made better because it was in front of an audience! Meyers brought audiences back in this week. I will miss his “Closer Look” being directed solely at Wally and the crew, but it’s worth it to see bits like this with an audience. Amber Ruffin deserves that kind of real-time laughter and praise. She’s earned it!


← This Week On Podjiba: 'SNL', 'Ted Lasso', 'La Brea', And More! | Aisling Bea Drolly Explains Why She Has an English Accent in the 'Home Alone' Reboot →