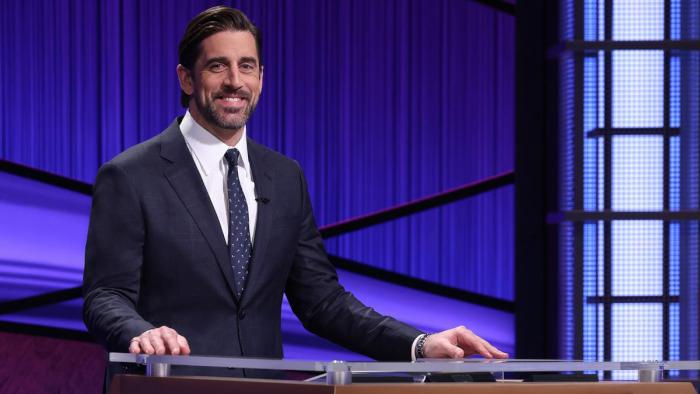 I’m a big fan of Aaron Rodgers, in part because — as NFL quarterbacks go — Rodgers is maybe the least problematic this side of the smartest QB in league history, Andrew Luck, who played just long enough to set himself up for life before retiring. Rodgers is maybe the only QB I’ve ever found particularly entertaining on podcasts and the only one well suited to hosting Jeopardy.

Rodgers began his two-week stint as guest host of Jeopardy last night, and he legit has his eyes set on being a permanent host, although that seems unlikely while LeVar Burton is still out there. Also, while he’s charming and smart, the delivery is a little on the wooden side.

Aaron Rodgers is a guest host on Jeopardy tonight 🔥

In either respect, it’s worth noting that Rodgers and his Green Bay Packers were knocked out of the NFL playoffs earlier this year by the Tampa Bay Buccaneers when the Packers took it to the eight-yard line with less than two minutes to play. Coach Matt LaFleur decided to kick a field goal and hope to get the ball back instead of allowing Rodgers to go for a TD and possibly tie the game. The Packers scored the field goal but never got the ball back and lost by 5 points. The Buccaneers and Tom Brady would win and go on to win the (goddamn) Super Bowl.

All of which brings us to last night’s Final Jeopardy question. The reigning champion Scott (who in previous appearances was a little smug for my liking) was too far behind to win the game, so he took the opportunity to razz Rodgers with his answer.

One contestant reminded him of the Packers’ NFC Championship Game loss 😂🙈😂pic.twitter.com/AzcV6wKcWk

Well played, Scott, and almost makes up for the smug play in earlier games. In the meantime, behind-the-scenes, Rodgers was absolutely thrilled with Scott’s decision to goad him.

Aaron Rodgers, by the way, is engaged to Shailene Woodley, who is super proud of Rodgers’ hosting stint.