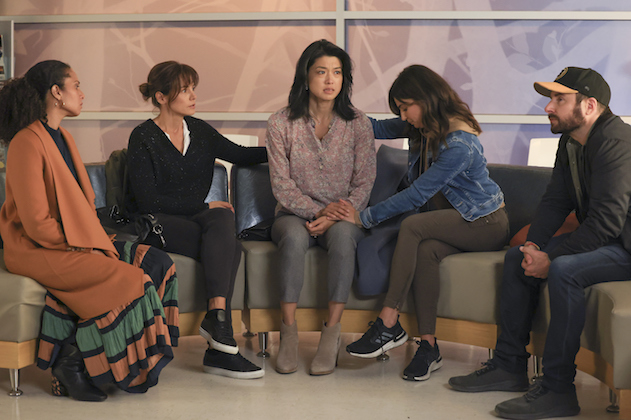 I’ve been covering A Million Little Things for a couple of years now. I’m not entirely sure why because it’s not a great show and these posts are very unpopular. On the other hand, I like the stupid series, watching a few weekly network dramas fills me with a sense of normalcy, and I dig that the creator of the show, DJ Nash, neither spins records nor is a character in Full House (Dad joke: BOOM).

It’s also one of those shows that absolutely does not need a recap because the storylines are neither complicated nor layered. However, I do love that Nash gives interviews with other publications after each episode to hold viewers’ hands while he walks them through the obvious while also endeavoring to inject some ambiguity into the proceedings for no real reason whatsoever. To wit:

Interviewer: “We just saw a man walk into a bar and order a drink. Is he still thirsty?”

Nash: “Probably not, but you never know, because sometimes it takes more than one beer to slake a person’s thirst, and what if he just got finished sprinting away from a murder scene?”

Interviewer: “Wait? Was there a murder?”

Interviewer: “Will we find out in next week’s episode?!

Anyway, I’m always looking for a gimmick to try and make these recaps a little more interesting, mostly for me, so, uh, today we had the pleasure of talking to “D.J. Nash” about the season premiere, which picks up right where the second-season finale ended, with Eddie having been hit by a car after walking out of a bar (where he did not drink). We hear a man in a red truck fleeing the scene while calling 911 on his cell phone.

Cut to the hospital, where Eddie is struggling to hang on to dear life. He eventually recuperates, except he’s left paralyzed from the waist down and has only a 10 percent chance of walking again. Katherine, however, is not going anywhere, and by the end of the episode — after a monthlong time jump — she and Eddie are renewing their vows.

Meanwhile, Gary and Darcy are still together — Darcy helps build ramps for Eddie’s wheelchair — while Maggie has moved to England, where she’s now roommates with Jimmy from You’re the Worst (Chris Geere), who plays a character named Jamie who seems like the less profane version of Jimmy. Elsewhere, Rome and Regina — who lost an opportunity to adopt a child after the baby’s mother decided not to give it up — are grieving. Rome wants to try to adopt again immediately while Regina is not ready.

Finally, at the end of the episode, Reverend Stewart, the father of Alex — whose death 20 years ago may or may not have been Eddie’s fault — is parked outside of Eddie’s house, spying on him and Katherine while they’re renewing their vows. Reverend Stewart is parked in a car that looks suspiciously like the red truck we saw run over Eddie and call 911 at the beginning of the episode.

Pajiba: So, let’s just get the obvious out of the way: Alex’s father, Reverend Stewart, ran over Eddie, right? And that was him parked outside of Eddie’s house?

Nash: Not necessarily. I wouldn’t be so quick to jump to conclusions. Twenty-year-old, beat up, red pick-up trucks aren’t that rare, and just because Alex’s father has motive, means, and opportunity to run over Eddie doesn’t mean he actually did. He might just like to stalk random couples and spy on them while they’re renewing their vows.

Pajiba: OK. Chris Geere is in this season playing what looks to be a potential love interest to Maggie. He’s British, sarcastic, and very cutting, but also sneaky charming. Is this character anything like his character, Jimmy, in You’re the Worst?

Nash: Not at all. Why would you ask that?

Pajiba: Have you seen You’re the Worst?

Nash: Every episode. That’s why I hired Chris to play the role of Jamie.

Nash: I don’t know what you mean.

Pajiba: OK. Let’s move on. Rome and Regina are in very different places right now as far as wanting to adopt a baby now or later. Is it safe to say that this will create some friction between the two this season?

Nash: It’s not safe to assume anything on A Million Little Lies. Anything can happen! How do you know that Rome is not a member of QAnon who only wants to adopt a baby so that he can consume the baby’s blood?

Pajiba: Is Rome a member of QAnon?

Nash: You’ll just have to wait and see what happens this season.

Pajiba: Will there be friction between Rome and Regina this season?

Nash: There’s friction in any marriage, isn’t there?

Nash: I guess you’ll just have to wait and see, but we don’t like to keep our viewers waiting too long, so will probably tell telegraph whether Rome and Regina will have a fight during February sweeps and if they have a fight, we’ll hold that for May sweeps.

Pajiba: Eddie and Katherine separated after Eddie’s affair, and it’s taken them two years to get back to where they were before, having renewed their vows in this episode. Can we expect smooth sailing for these two as a couple now?

Nash: Eddie is paralyzed from the waist down, which would make it much easier for Katherine to cheat on him.

Pajiba: Wait?! WHAT? Is Katherine going to cheat on him?

Nash: I didn’t say that. That’s a weird conclusion to draw. Why would you assume that? That would be a very cruel twist, and Katherine doesn’t strike me as a cruel person.

Pajiba: So Katherine is not going to revenge fuck someone else?

Nash: I didn’t say that.

Pajiba: Are you going to work the COVID-19 pandemic into this season?

Nash: Yes. For sure.

Pajiba: So, with Maggie in London, will the pandemic mean she’ll get stuck there with Jamie?

Nash: Good question. I’m glad you asked. That seems like a natural progression for this season. I’ll mention that idea in the writer’s room.

Pajiba: That’s not where you were going with this?

Nash: It’s possible, but I’m not really at liberty to say. You just never know on this show. Maybe Maggie gets pregnant with Jamie’s baby, Jamie dies of COVID-19, and then Maggie decides to give her baby to Rome and Regina.

Pajiba: Whoa! Is that going to happen?

Nash: Whoa! I don’t know. We were just going to have Maggie get stuck in England with Jamie, as you said, but I think maybe this other idea might be more fun. Can we delete that from this interview? I don’t want to spoil it.

Pajiba: Sure, sure. I’ll just delete the only interesting thing you’ve said, so far.

Nash: Really? You will?!

Pajiba: I guess you’ll just have to wait until the post is out to find out.