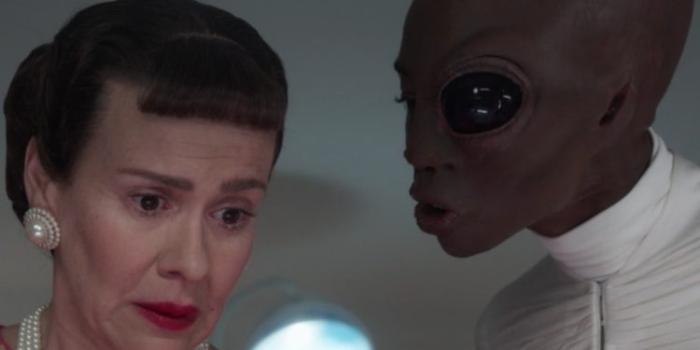 Dwight D. Eisenhower — at the insistence of his VP, Richard Nixon, and under duress because aliens have possessed the body of his wife, Mamie — signs a treaty with aliens agreeing to allow them to abduct 5,000 Americans a year in exchange for the microchip technology that will give rise to everything from microwaves to smartphones. A reluctant signatory, Eisenhower tries to warn JFK away from the aliens, but JFK is assassinated, probably by the aliens who also kill Marilyn Monroe because she knew too much about Area 51. After the aliens help Dick Nixon land the Presidency, he gets out of line, and Mamie Eisenhower — who is the real Deep Throat — orchestrates the Watergate scandal. When Nixon refuses to resign, the aliens anally probe him until he agrees.

Area 51, where the fake moon landing is staged, is also a facility where the aliens are using the 5,000 annual abductees in an attempt to create the perfect alien-human hybrid, all with the blessing of Mamie Eisenhower, who becomes an ally to the aliens and becomes known for popularizing birthday and Halloween celebrations among adults (she never does get a national Evacuation Day holiday off the ground, however). She goes along with the human-alien hybrid scheme and is even given immortality and allowed to live in Area 51 with Steve Jobs until — 60 years after the treaty is signed — Cindy Crawford’s daughter finally gives birth to the perfect hybrid baby (but not before one of her male friends also births an alien-baby that attacks the face of another friend and kills him).

Cindy Crawford’s daughter is decapitated, but her body is used to mass-produce human-alien hybrids an hour at a time, as though on an assembly line. The aliens decide to join forces with another reptilian alien race (of which Henry Kissinger is a member) and destroy mankind. Once Mamie Eisenhower hears of the plan, she endeavors to kill Cindy Crawford’s daughter and the perfect hybrid baby to give humanity some more time to fight off the aliens. Her plan, however, is unsuccessful. An alien named Theta explains that humans have to be destroyed because we f**ked up our planet and it’s time to give someone else a turn. She makes Mamie’s head explode.

← The Far-Right Is a Support Group for Losers | Some YA Authors Announced Plans to Create an NFT Project for Fans. It Did Not Go Well →