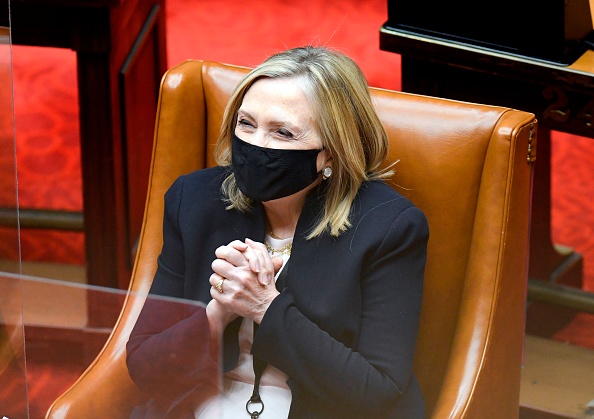 I happened to catch Joe Biden’s speech last night accepting the Electoral College’s affirmation of his win. It was a solid speech (other than the cough — put a goddamn bottle of water on the podium, people!), in which he reiterated his margin of victory, the fact that he won in the Electoral College by the same margin that Trump called a landslide in 2016, the fact that the Trump campaign has repeatedly lost in court, and that over 80 judges — many of whom were appointed by Trump — rejected claims of voter fraud. He basically called on Trump to stop being a petty asshole and move on. I thought he really stuck the landing on the speech, too. So, obviously, Trump listened, right?

This is BIG NEWS. Dominion Voting Machines are a disaster all over the Country. Changed the results of a landslide election. Can’t let this happen. Thank you for the genius, bravery, and patriotism of the Judge. Should get a medal! https://t.co/4WwiA83Prg

Thank you Kevin. Many Trump votes were routed to Biden. The highly respected Michigan Judge released this epic report. True all over the Country. This Fake Election can no longer stand. Get moving Republicans. Big Swing State Win! 75,000,000 VOTES. https://t.co/0sodJFr80k

He’s not going to stop, even after he’s out of office. He’ll be sitting in his underwear at Mar-a-Lago, crouched over his phone with his gnarled fingers, and his urine-stained undies, tweeting about how he’s still the President. For what it’s worth, some Republican Senators are at least publicly acknowledging what they have all known to be true since November 3rd. Lindsey Graham won’t f**king say that Trump is done, but he is saying that he sees only “a very, very narrow path for the president.” There is no path, Lindsey. “I don’t see how it gets there from here, given what the Supreme Court did,” he added. Nobody does, Lindsey. Nobody does. Biden for his part said that seven Republican Senators have called and told him that they are ready to work with him, and a lot of other Senators begrudgingly accepted that Trump is done.

Mitch McConnell, however, is not among them. He will not publicly acknowledge Biden’s victory because he believes it will jeopardize Republicans in the runoffs in Georgia, and also because he has some legislation he hopes to have the President sign by year’s end that he worries Trump will not sign if McConnell acknowledges Biden’s victory. On the other hand, Vladimir Putin finally acknowledged that Biden is the President-elect. Release the kompromat!

The election was basically put to bed, and people began to get their vaccines. It was, in the end, a good day for the United States. From the NYTimes:

“It is a cosmic convergence,” said Benjamin L. Ginsberg, a leading Republican election lawyer who has been critical of President Trump’s efforts to overturn the vote that he lost. “And what’s good about both of the events occurring on the same day is it really can provide a turning point for a nation that really wants a turning point.”

Over 200,000 more infections were reported, in addition to another 1600 deaths, and yet relative to the sh*tshow the rest of December has been, the United States had a decent day. Hopefully, we’ll begin to have more like that in the days, weeks, and months to come.