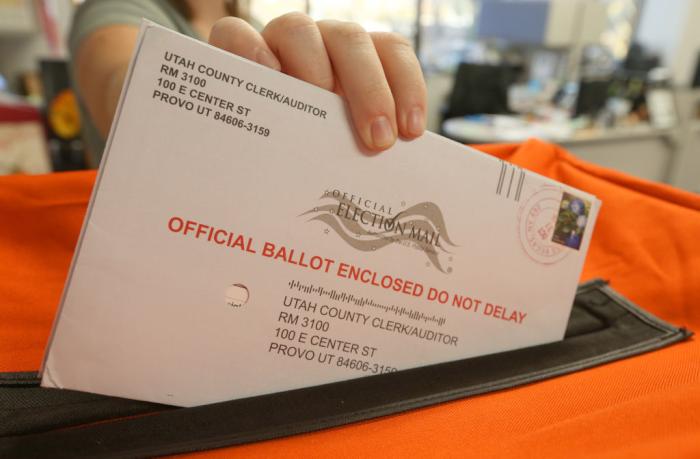 What the Hell Is Trump On About With These '80 Million Unsolicited Ballots'?

Hello, choir, preacher here. I know I’m not saying anything here you don’t already know, but I’ve seen my local news coverage, and I can see that folks are starting to get really nervous about all of Trump’s bullsh*t claims about mail-in voting. A lot of people who ordered up their absentee ballots weeks ago are now reconsidering, and deciding that they might prefer to vote in person.

Look: If you can do so safely, and it’s not too much of a burden to you, go ahead and vote in person. Here in Maine, I feel very comfortable voting by mail, because they give you a tracking code so that you can follow it and make sure that your ballot is returned, processed, and counted. I don’t know if that’s common in other states, but it should be. It’s very comforting.

All the same, the thing that Trump is grumbling about the most are these “80 million unsolicited ballots.” He’s not talking about states where you request a ballot and send it back, like Florida or Pennsylvania; he’s talking about states where every voter is automatically mailed a ballot and can choose to send those ballots back in the mail or appear in person. It’s called universal mail-in voting. I’m not positive that it’s 80 million ballots, but it is nine states, and one of them is California, so 80 million sounds right.

Now, Trump’s issue here is that these particular ballots are subject to more fraud, I guess, because they were “unsolicited.” But they are not exactly “unsolicited”: By registering to vote, you, in effect, are asking for a ballot. If you go to the DMV and pose for a driver’s license photo, it’s not “unsolicited” when they actually send you your driver’s license.

There are 9 states and the District of Columbia that send ballots automatically by mail, and five have been doing it for years. Those are Colorado, Hawaii, Oregon, Utah, Washington. They have the system down pat. Moreover, everyone knows how those states will vote — four will vote for Biden, and Utah will probably vote for Trump. This is not in dispute.

Four new states are doing it this year: California, New Jersey, Vermont, and Nevada. Again, the results in three of these states are not in question. Only Nevada is a battleground state, although Biden has consistently held a six-point lead there, and the state is only worth 6 electoral votes. It is unlikely to be decisive.

In other words, the election night results in eight of the nine states he’s complaining about are very unlikely to be in doubt. The real concern for the purposes of the Electoral College is Wisconsin, Michigan, Pennsylvania, Florida, and Arizona. You can request absentee ballots in each of those states, just like Donald Trump does for the state of Florida. Trump has no apparent issue with “absentee ballots” though the only difference between those and universal mail-in ballots is that absentee ballots require voters to proactively request the ballot.

This, however, is where it gets concerning: Michigan, Pennsylvania, and Wisconsin are not allowed to count mail-in votes before Election Day, although Florida and Arizona can. This is what Democrats are worried about: That Trump will announce a victory on Election Night based on results out of Wisconsin, Pennsylvania, and Michigan that do not yet fully include absentee ballots. Nevermind that these are not actually the kind of ballots that Trump claims to be concerned about. Polls suggest that GOP voters are more likely to vote in person, therefore the election night results in Michigan, Pennsylvania, and Wisconsin will probably skew toward Trump.

So, if you live in the District of Columbia or any of those 47 other states, I genuinely wouldn’t worry about whether to vote in person or by mail. Go on with your bad self and do it any way you’d like. Drop that ballot in the mailbox, take it to city hall, or wear a mask and stand in line to register your vote. It’s all good!

Moreover, if you live in Michigan, Pennsylvania, and Wisconsin, if you mail your ballot in by November 2nd, it’s gonna get counted, even if it doesn’t arrive until a week or two after the election (each of the three states, in fact, have extended the deadlines for how long to count mail-in ballots over fears regarding Trump’s shenanigans with the USPS). The problem is that Trump is unlikely to wait until all those votes come in before declaring victory based on in-person votes. So, if you live in one of those three states, and you feel completely safe doing so, by all means, vote in person. It won’t change the outcome, but it might prevent Trump from prematurely declaring victory before all the votes are counted.