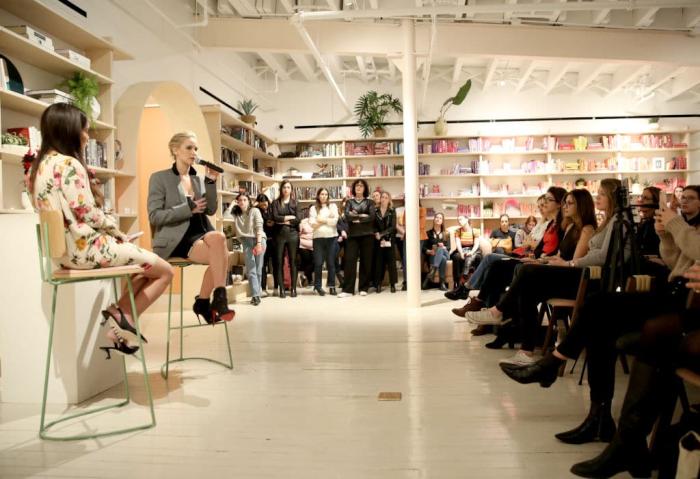 The COVID-19 pandemic has claimed its fair share of economic casualties. On top of the 1.21 million cases of coronavirus reported across 200 countries and the deaths of over 65,600 people (as of the writing of this piece), the world has essentially come to a standstill. These are scary times, near-unprecedented for millions of people, and the measures put in place to stave off its worldwide spread have dramatically changed our way of life. Between travel restrictions, the government advised/mandated self-isolation, curfews, industry shutdowns, and mass cancellations of some of the biggest world events, it’s safe that say that normalcy, however you define it, does not apply to our current situation. Every industry has been impacted by COVID-19, from entertainment to healthcare to sports to retail to journalism and beyond. Frankly, a lot of businesses, including some prominent names known across the nation, may not make it out of this pandemic in one piece.

One such instance is The Wing, the women’s only co-working space and social club founded in 2016. Last week, it was announced that the company had laid off or furloughed the majority of its employees. As reported by Vice, the company had to ax nearly all of its hourly employees and half of its corporate staff after ‘ninety-five percent of our revenue disappeared overnight.’ The company’s founders, Audrey Gelman and Lauren Kassan, said that they would also forego their salaries, but that ‘our only path forward is to make significant and painful cuts, layoffs and furloughs to prevent The Wing from closing as a business.’ The call also said that those laid off will receive two months’ severance and will keep their employer-sponsored healthcare through June. Their paid time off will be paid out, access to mental health services will be provided, as well as Rosetta Stone classes to ‘develop English language skills’, a point that revealed much about the make-up of the company’s in-house staff. A GoFundMe was set up to help support staff. To make matters worse, some workers found out about the layoffs via the media before the company itself.

If you’re not familiar with The Wing, the chances are you’ve still stumbled across it on Instagram. Over the course of three and a half years, the company built a highly identifiable brand and aesthetic that sold a comforting form of radicalism as the aspirational ideal: Bookshelves organized by color, swaths of millennial pink; chic furniture and wallpaper adorned with the faces of iconic women. These co-working spaces came to being after Gelman, a former political staffer who worked as press secretary to New York City comptroller Scott Stringer, found herself in need of a place in-between business meetings and work to relax, get some work done, and do the basics, like charge her phone or answer emails. She developed the idea with Lauren Kassan, formerly of ClassPass, and in October 2016, after many months on Instagram hype, The Wing’s first location opened in the Flatiron District. The company’s funding came from investors like Julie Rice of SoulCycle and Hayley Barna of Birchbox, with millions of dollars coming in from big names like Megan Rapinoe and Mindy Kaling. By March 2019, the company had announced a staggering $117.5 million in funding since its founding.

Being in the same space can at best, feel mundane, and at worst, be anxiety inducing. The Wing's very own Interior Design team is here to offer a fresh perspective on the space where you've been spending your time. DM or tag us in a photo of a room or corner in your living space that needs some love and our experts will offer you ways to change it up and make it sing. Check our stories for the before and afters! #connectfor

It didn’t take long for The Wing to become the place to see and be seen. My seldom-used Instagram account suddenly seemed chock-full of glamorous professional women about town tagging The Wing or sharing images from its much-vaunted events that included guests like Hilary Clinton, Jennifer Lawrence, and the cast of Big Little Lies. There was a book club, crafting events, political organizing, volunteering opportunities, an in-house podcast and bi-yearly glossy magazine, and a whole lot of networking. Indeed, The Wing prided itself on its ability to bring women together and make magic happen. It wasn’t just about workspaces either. Gelman talked frequently of wanting to tap into an oft-overlooked history of women’s clubs and revive a tradition of radical spaces for political and social change. This was a safe space, one of wonder and a seemingly limitless future. So, how does one go from over $100 million in funding and a world of hype to potentially never being able to open its doors again?

The Wing’s troubles were evident several weeks ago when a piece in The New York Times written by Amanda Hess revealed the grime beneath the polished surface of the company. Workers, especially those on the ground level dealing with front-of-house and kitchen duties, spoke candidly of the decidedly anti-utopian vibe of The Wing. One worker said they were treated ‘like a human kitty-litter box.’ The lack of diversity and outright racism of the spaces was noted, with members verbally and emotionally abusing staff. One former employee, a non-binary first-generation Liberian-American, described feeling as though the company had only hired her ‘so that they could exploit my presence and my image for their own purposes, to make it seem like they were more inclusive than they actually were.’ Employees were paid late and tried to talk to Gelman about the ‘toxic culture’ they worked in. Many would only speak on condition of anonymity because they feared pushback for breaking non-disparagement clauses in their employment contract of being blackballed by the company’s powerful network of well-connected members. The Wing tried to push back with a pre-emptive apology but many felt the damage was done. The Times piece officially reinforced a lot of the unease many had felt around the entire concept of The Wing and feminism as a commodity.

Capitalism f**ks up everything. We live in a world dominated by this fact, even as we find ourselves forced to participate in this inherently unequal system. Think of any radical or deeply anti-capitalist ideal and capitalism will find a way to turn it into a product for sale in no time. Feminism is, alas, no different, and every wave of the movement has been permeated by this commodification and the divides it breeds. The world doesn’t want true radicalism or disruption: it merely wants the illusion of it, one that keeps the smothering status quo in place. Why encourage the fight for universal basic income and fully paid parental leave when it’s far more comfortable and cover-ready to celebrate female CEOs and feminist slogan t-shirts by Dior? It’s girlboss feminism, the ‘women can have it all’ ideal that being seen to be being feminist is worth more than the act itself. This ideal celebrates a handful of chosen women at the top then pushes the same old bootstraps ideal that conservatism fetishizes: If you too work hard enough and put in the extra hours and look good doing it then you too can become a girlboss, just like Maggie Thatcher.

Sheryl Sandberg’s Lean In feminism became a rallying cry for a brief moment in time but, as many people pointed out, it was an ethos that relied leaning on a number of disadvantaged women with fewer privileges than their She-E-O superiors, from childminders to domestic staff to any employee making minimum wage. Any operation of venture-funded feminism requires a massive amount of unspoken, underpaid, and deeply unappreciated labor. The emotional costs alone of this system are immense, especially for a place like The Wing that designated itself so firmly as a feminist utopia where the mere act of being a member was radical. This came up in the Times profile, with employees describing their experiences with members who felt they could treat ‘the staff’ like dirt because they’d literally paid their dues.

The girlboss feminist ideal remains potent for a reason. We know it’s toxic and exploitative and shallow as all hell but it’s also essentially the only mainstream image of feminism that is sold to us. Anything left of the center is deemed ‘too much’ and the women who loudly fight for more — who are, not coincidentally, often women of color — are dismissed as going ‘too far’. That doesn’t even get into the toxicity of modern, media-endorsed feminism that relies on positioning conservative women as heroes and exacerbating an already dangerous level of transphobia by latching onto public figures who openly fight for the same bigoted causes as the evangelical right.

Feminism and capitalism should be incompatible, but seeing as we live under the crushing confines of the latter, it’s understandable on some level why we allow ourselves to be a bit more flexible about the former. Clearly, however, this compromise was doomed from the start. You cannot sell the dream of feminism for a price. You cannot make it reliant on year-on-year profits to appease venture capitalists. An ethos should not be dependent on a billionaire’s whim. When that happens, what we’re left with is mass layoffs, emotional trauma, and a disheartening lack of tangible long-term change. So the cycle continues. We keep working extra hours and building our ‘brands’ and buying into the idea of being one-woman girlbosses because the options are so limited and just being seen to be ‘killing it’ is half the battle. I can’t say I’m exempt from this myself. I work almost constantly and, even though I have absolutely no desire to be part of that machine, I can’t lie and say I haven’t felt the allure of that millennial pink dream.

The Wing had big ambitions but it was also reliant on the pre-existing system of capitalism and its inherently exploitative practices. Many criticisms had been made about its big monthly membership costs (although the company was always priced much lower than WeWork) and the exclusivity of its ranks. They opened multiple lavish locations over the space of three years but none of that $100 million funding seems to have been placed aside for a rainy day. Moreover, investors have little incentive to keep pumping money into something like a co-working space when nobody is leaving the house to work, and a lot of those men feel no qualms about cutting the cord. Capitalism will always shove women to the curb, especially when they’re women of color, trans or queer women, women with disabilities, or anyone who doesn’t fit that marketable norm.

In 1970, the National Women’s Liberation Movement held its first-ever conference. More than 600 women attended, which established the group’s biggest demands. They were: Equal pay; equal education and job opportunities; free contraception and abortion on demand, and free 24-hour nurseries. 50 years later and, despite having made vast progress in a number of areas, it remains stark to see how little has changed on those key areas. Equal pay is still a fantasy for many women, especially women of color, and the workplace is dominated by patriarchy at every turn. To even suggest abortion on demand or state-funded childcare on this level is considered too radical for most politicians and public feminists. The basic qualities that would allow women to truly flourish and be liberated from sexism are denied at every turn, deemed too unruly or unfeasible, simply not a priority, so let’s just talk about branded t-shirts and have conferences where we talk about change instead. The venue may be beautiful but what is it really worth when we’re stuck at square one?

Are you good enough? Yes you are.