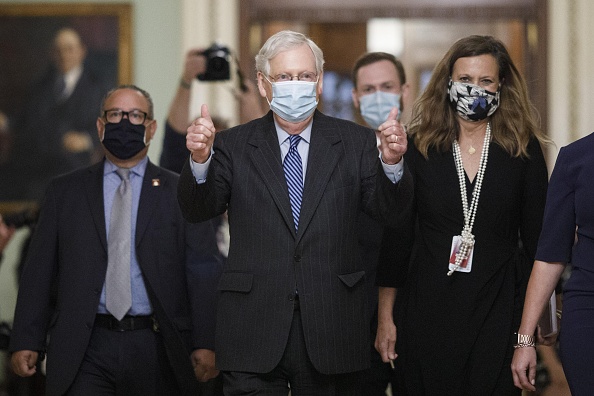 We Are Already in the Midst of a Civil War in America, and It's Being Fought at the Ballot Box

Last month, Indi Samarajiva — who lived through the end of a Civil War in Sri Lanka — wrote a piece for Medium that basically suggested that, whether we realize it or not, we’re in the midst of our own collapse here in the United States. However, we’ve been conditioned by Hollywood movies to believe that our nation’s collapse would come with a grand announcement, or that Paul Revere would come galloping through the streets exclaiming, “America is done! America is finished! Long live, America!” That’s not how it happens, Samarajiva writes:

I lived through the end of a civil war — I moved back to Sri Lanka in my twenties, just as the ceasefire fell apart. Do you know what it was like for me? Quite normal. I went to work, I went out, I dated. This is what Americans don’t understand. They’re waiting to get personally punched in the face while ash falls from the sky. That’s not how it happens.

This is how it happens. Precisely what you’re feeling now. The numbing litany of bad news. The ever rising outrages. People suffering, dying, and protesting all around you, while you think about dinner. If you’re trying to carry on while people around you die, your society is not collapsing. It’s already fallen down …

… As someone who’s already experienced societal breakdown, here’s the truth: America has already collapsed. What you’re feeling is exactly how it feels. It’s Saturday and you’re thinking about food while the world is on fire. This is normal. This is life during collapse.

Granted, Samarajiva is a privileged Sinhalese, and the Tamils had a very different experience, I’m sure, but the point still holds, because most of the people reading this website right now are as privileged as Samarajiva, and most of us are not experiencing death outside our doors every day, even as refrigerated trucks carry away bodies and hospitals fill to capacity. But we are fighting over masks; there have been plots to kidnap and kill governors; there have been “militias” marching on state capitols and thousands and thousands of BLM supporters marching through the streets.

We are a divided country, probably as divided as we have been since the Civil War. Our current civil war, however, will not look like the battles fought with cannons and soldiers that we typically associate with civil wars. This civil war is being fought at the ballot box. This is probably the beginning of a process whereby every four years, we will decide who controls the country, and that war will be fought in polling stations and with mail-in ballots and yard signs.

Right now, the Democrats have more soldiers. But the Republicans — in the form of judges — have more bombs, and they play nasty. Yesterday, the conservative Supreme Court dropped a bomb on Wisconsin and told them that no ballots received after 8 p.m. on Election Day will be counted, regardless of when they are postmarked. If you live in Wisconsin and you have a mail-in ballot, please do not mail it in. It’s too late. That figurative bullet will not hit its mark; you’re going to need to take it, in person, to a ballot box, or you’re going to need to stand in line on Election Day and register that vote. (And please: So, we’re clear: I am not calling for violence; this is a war metaphor).

The scarier notion is that Supreme Court justice Brett Kavanaugh signaled in a footnote in his decision: He basically threatened to go nuclear.

This comes on some night Trump tweets winner of election must be announced Nov 3 pic.twitter.com/Y9iZcBGOGy

In that footnote, Kavanaugh basically adopted a Trumpian view of elections: People need to know the results on election day, and the longer counting goes on, the more uncertainty enters into the equation. Kavanaugh is warming up an argument that suggests that when the clock strikes midnight on election day, voting should cease. This is unacceptable anywhere, but especially in Wisconsin (and Pennsylvania), where poll workers are not allowed to start counting mail-in ballots until election day. This argument — if adopted by the Supreme Court — would disenfranchise tens of thousands of Wisconsinites, and if Wisconsin were the decisive state, a decision like this could essentially nullify every vote for Biden in this country.

That is the kind of arsenal that the Republicans have now, and the only way we can counteract it is by sending in more soldiers, which Republicans will continue to drop bombs on/disenfranchise. Did you know that there are six majority-minority states in this country now? Hawaii, New Mexico, California, Texas, Nevada, and Maryland. Only one of those states consistently votes Republican — Texas — and that’s only because it’s the hardest state in the country to vote in, because the Republicans have dropped metaphorical bombs on as many POC voters as possible. That’s how they have maintained minority rule in Texas. Republicans want to make every state in the nation more like Texas. That is how they are fighting this Civil War, and that is how they are winning.

In order for us to wrestle control back, we have to overpower them with soldiers, get into office, and build our own arsenal by enfranchising as many people as possible. That’s how we will win this war, and how we can do so permanently. It’s the only way to end minority rule in this country, and this year — more than any other — our soldiers may have to risk their actual lives by registering votes in person during a pandemic. There’s no other way around it, because if we lose this election, and if the Republicans concretize their voter disenfranchisement laws, it may be a decade or two before we can amass enough soldiers to overcome their weapons.

I was feeling pretty good about our chances next Tuesday until that double whammy last night of Amy Coney Barrett being confirmed by the Senate, and the Supreme Court dropping that decision in Wisconsin. The Republicans may have the weakest general leading their efforts since Andrew goddamn Johnson, but they have a M.O.A.B. waiting on standby, and if the race is close next Tuesday, they will not hesitate to drop it.

← Amy Coney Barrett Has Been Confirmed to the Supreme Court. Goddammit. | George Clooney Returns With 'The Midnight Sky' Trailer →