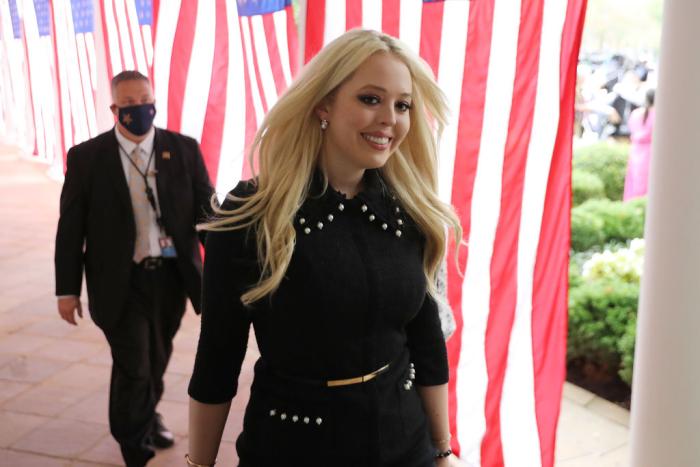 Trumpdates: Watch Out, Folks: Tiffany Trump Is Going to Turn This Whole Thing Around

Good morning! There are 14 days until the election, and we’ve just lost the entire LGBTQ+ community to Donald Trump, after this tremendously convincing speech from Tiffany Trump (channeling Miley Cyrus):

Haha! Remember when Donald Trump joked about how Mike Pence wanted to hang gay people! He sure is a “friend of your community.” Also, how he supports employment discrimination against LGBTQ people and how he banned transgender service members from the military, and don’t get us started on Betsy DeVos. What a tremendous supporter of the queer community he is! Thanks, Tiffany!

Tiffany Trump is what happens when Miley Cyrus dresses up as Ivanka for Halloween. https://t.co/i2aFzzwHss

Tiffany Trump is the epitome of the straight girl having her bachelorette party at a gay club, barfing all over it, not tipping and thinking that constitutes “having gay friends.” And fuck her for leaving out our trans family. There IS NO LGBTQ WITHOUT THE T.

How it started How it’s going pic.twitter.com/KBOdrPP3BR

Tiffany Trump might be my favorite Trump child because she lets us know without the money the Trumps would be known for fighting constantly outside the waffle house over dumb shit.

After such a rousing speech from Tiffany, I’m surprised that USA Today gave its first-ever Presidential endorsement this morning to — gasp! — Joe Biden? But Joe Biden is no friend of the LGBTQ+ community! Tiffany Trump said so!

Meanwhile, in a bit of bright news, John Roberts voted with the liberal wing of the Supreme Court yesterday to allow Pennsylvania to extend its deadline 3 days for mail-in ballots, so long as they are postmarked by election day. The decision was a 4-4 one, allowing the lower court’s decision to stand. It does not bode well, however, for future decisions on similar voting matters, as Amy Coney Barrett will likely join the vote suppressors on the Court.

The news wasn’t as good for Texas — already the most difficult state in the Union to register a vote — where the 5th Circuit Court of Appeals said that county clerks could reject ballots of signature mismatches and not tell the voter before election day in order to give that voter a chance to correct the mistake. One interesting note to offset that fact, however, is that in Travis County, Texas — where Austin is located — 97 percent of voters are now registered. That’s crazy!

It’s also a good reminder to ignore the polls showing Biden in the lead, because Biden needs at least a three to four-point lead nationally to overcome the Electoral College, and he’ll also need more padding to account for all the votes that Republicans will suppress and or kick out, which I assume are not factored into the polls.