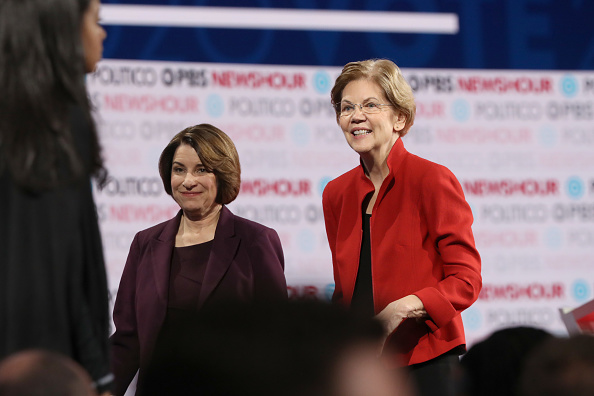 The New York Times editorial board couldn’t be bothered to stick its neck out for one candidate to endorse in the Democratic primary ahead of the Iowa caucus in two weeks; it endorsed two candidates. The upside here is that both candidates — Elizabeth Warren and Amy Klobuchar — are women. The other upside is, well, nope, there are no more upsides.

Granted, I appreciate that they endorsed Elizabeth Warren, although I’m not sure how this helps Warren win over the demographics from which she has the least support: People of color and lower-income voters. An endorsement from the Times, unfortunately, plays into demographic-based stereotypes about Warren appealing exclusively to college-educated whites. Meanwhile, the Klobuchar endorsement probably increases Klobuchar’s chances from “snowball’s chance in hell” to “when pigs fly” (thanks to climate change, I’m sure at least pig flying in a storm will be photographed and meme’d in the coming years).

So, I guess @AmyKlobuchar and I are now both undefeated in elections and undefeated in New York Times endorsements! https://t.co/8848fMGc16

(Please do not choose Klobuchar as your running mate, Elizabeth. Please.)

The choices themselves aren’t bad — Warren is my 1A choice, while Klobuchar is at least a better moderate alternative to Biden — but the decision to endorse two candidates is, well, cowardly as hell, because the Times posits that the choice is between two visions, and then the Times refuses to take a position on which of those visions is paramount.

On the Democratic side, an essential debate is underway between two visions that may define the future of the party and perhaps the nation. Some in the party view President Trump as an aberration and believe that a return to a more sensible America is possible. Then there are those who believe that President Trump was the product of political and economic systems so rotten that they must be replaced.

Cool, cool, cool. Who knew you could just … not decide? It would have been so much easier if Felicity could have chosen Ben and Noel! Sophie needs to go back to Auschwitz and tell those Nazis that she chooses both of her children, thank you very much! And she can just tell them that The New York Times in 2020 told her she could!

Anyway, here’s how Twitter responded, and I want you all to know that while I really do like Bernie, his rabid Twitter supporters are hell, and I had to wade through a lot of them to find these. A lot.

If I had to choose just ONE newspaper, it would be The New York Times and The Washington Post.https://t.co/vK6JpeE7cW

The NY Times harms Warren and discredits itself (to the extend that it hadn't already) by putting Warren in the same category as Klobuchar. https://t.co/daQT7TjggV

The New York Times even Both Sides’d its endorsement. https://t.co/riYdZ2maiT

An endorsement means picking a side, and it’s certainly frustrating to see that didn’t happen.

On another note, I know it’s really bothering some folks that the New York Times gave twice as many endorsements-and none of them went to a man.

The New York Times wants you to know that it's "woke" enough to endorse not one, but TWO women (Warren and Klobuchar), but also that they're too cowardly to pick just one of them.

The NY Times Editorial Board’s process of unveiling its endorsement of the Democratic Presidential candidate is an exercise in collective narcissism, and its schizophrenic decision only underscores the reality of a self-appointed elite out of touch with American reality.

January 2021: on a chilly morning in Washington DC, Elizabeth Warren and Amy Klobuchar are each sworn in as the President of the United States. A proud New York Times editorial board looks on, as their history-making endorsement itself makes history

I endorse the Chiefs and the 49ers to win the Super Bowl.