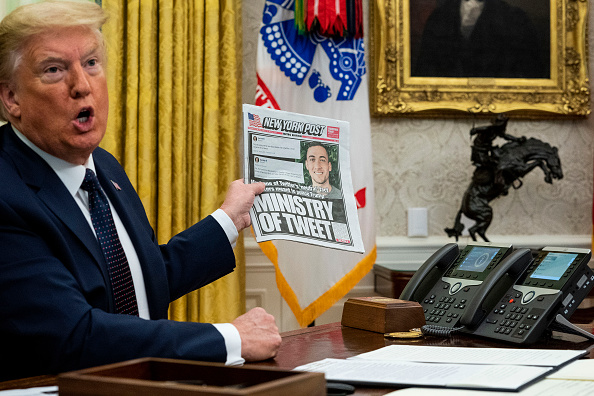 Twitter and Trump Continue Their Path Toward Mutual Self Destruction

In Minneapolis last night, thousands continued to protest the tragic death of George Floyd. While thousands of peaceful demonstrators marched through the streets of Minneapolis and other cities around the country calling for justice, there has been looting and property damage; a police station in Minneapolis abandoned by officers was set on fire.

As one might expect, Donald Trump had [racist] thoughts and tweeted them out. Twitter, however, placed a warning on the second tweet, saying that it violated the rules for glorifying violence.

….These THUGS are dishonoring the memory of George Floyd, and I won’t let that happen. Just spoke to Governor Tim Walz and told him that the Military is with him all the way. Any difficulty and we will assume control but, when the looting starts, the shooting starts. Thank you!

The phrase “when the looting starts, the shooting starts,” has [racist] historical context. It was uttered by former Miami Police Chief Walter Headley during a December 1967 news conference and helped contribute to riots in a black neighborhood in Miami in 1968.

Of course, the tweet still exists — you just need to click on the warning to see it — and Twitter’s warning has brought even more attention to it. Twitter decided to keep it up in the public’s interest, and because he is the [racist] President, he doesn’t get suspended from the platform. Trump, nevertheless, took aim at Twitter again after the warning.

Twitter is doing nothing about all of the lies & propaganda being put out by China or the Radical Left Democrat Party. They have targeted Republicans, Conservatives & the President of the United States. Section 230 should be revoked by Congress. Until then, it will be regulated!

“The President has been targeted by Twitter.” @MariaBartiromo What about all of the lies and fraudulent statements made by Adam Schiff, and so many others, on the Russian Witch Hunt Plus, Plus, Plus? What about China’s propaganda? WHO’s mistakes? No flags? @foxandfriends

“Regulate Twitter if they are going to start regulating free speech.” @JudgeJeanine @foxandfriends Well, as they have just proven conclusively, that’s what they are doing. Repeal Section 230!!!

Again, I’m not so sure that this is the fight that Trump wants to have — it could backfire spectacularly. If legal protections over dangerous content are taken away from social media outlets, they will have to ban users and delete tweets. If, instead of writing a letter to Twitter asking the social network to delete Trump’s tweets, the husband of the late Lori Klausutis decided to sue Twitter over Trump’s tweets, Twitter would be in deep shit without the legal immunity Section 230 provides. In order to avoid that outcome, Twitter would probably just delete Trump’s account. If Twitter deleted Trump’s account, it would probably lose one of its biggest sources of traffic (and I’m sure Trumpers would flee in protest).

Alternatively, in order to avoid legal liability and avoid being considered a “publisher,” social media platforms wouldn’t be able to moderate any Tweets or posts, which would allow them to be so flooded with SPAM, bots and misinformation that they would be unusable.

Basically, Twitter and Trump could silence each other out, and honestly, that’s not the worst thing. However, even silencing Trump is not worth the chilling effects on speech that repealing or modifying Section 230 would have on the Internet. On the other hand, who would miss important Tweets like this one?

“These THUGS are dishonoring the memory of George Floyd, and I won’t let that happen. Just spoke to Governor Tim Walz and told him that the Military is with him all the way. Any difficulty and we will assume control but, when the looting starts, the shooting starts. Thank you!” https://t.co/GDwAydcAOw


← A YouTuber Said She 'Re-Homed' Her Adoptive Child | A Black CNN Reporter Was Arrested For Doing Nothing; Derek Chauvin Still Hasn't Been →