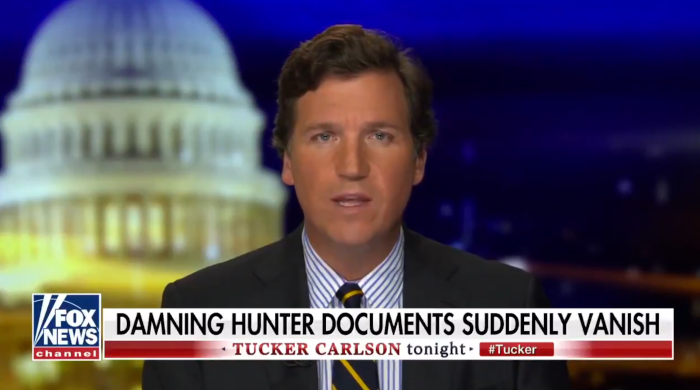 Tucker Carlson's October Surprise Got, uh, Lost in the Mail

Good morning! There are 5 days until election day, and from what I understand, we have just narrowly avoided the biggest October surprise in the history of October surprises. From what I understand, Tucker Carlson had information about Joe Biden that was so damning, it would blow the election wide open. Had this information been revealed, there would have been millions of people banging down their county clerks’ offices and demanding that their votes be changed from Biden to Trump. The information was so explosive that Trump not only would have won the 2020 election but the 2024 and 2028 elections, too. The information was so devastating that it would have triggered an automatic change to the Constitution, allowing Presidents to run for multiple terms.

Tucker Carlson had the biggest bombshell of them all, folks. Unfortunately for Tucker Carlson — AND AMERICA — the cache of documents containing that devastating intelligence, uh, got lost in the mail.

The Satan-worshipping, baby-eating Radical ANTIFA leftists have infiltrated the mail service! They have murdered mail employees, drained them of their Adrenochrome, and replaced them with imposters specifically hired to go through Tucker Carlson’s packages and ensure they never reach their destination! CALL OFF THE ELECTION.

LOL Tucker wants his viewers to believe the super damning Hunter Biden info he had just disappeared without a trace.

I don't want to be too snarky but Trump needs to close a big polling deficit and this is the message on a day with 80k new COVID cases and a 940 point decline in the Dow. https://t.co/aJ4kPawfmb

We had Biden dead to rights! Trust us! But the flippin' mail! https://t.co/2jQLJqizHR

What should I do with this envelope marked Damning Hunter Biden Documents that someone just slipped under the door?

I had the weirdest dream last night that Tucker Carlson claimed on air that he had devastating proof of Joe Biden’s perfidy and corruption but then he somehow lost the only copy of the evidence.

Folks, I apologize. It turns out that I HAD the devastating Tucker Carlson footage, but I accidentally taped over it with the 1989 Rose Bowl on my VCR.

Is this what Tucker Carlson was looking for? pic.twitter.com/RBBZsC7qhz

Hey @TuckerCarlson, last year I used this thing called a smartphone to take a picture of the receipt from the hardware store because I wasn’t sure I had bought the right size fuse for the Christmas lights. As a “news” organization, Fox might want to invest in this new technology. https://t.co/NZqDKe9YH5

Rudy Guliani reaching down his pants and Tucker Carlson reaching for a conspiracy on Biden.

They both found nothing

We disagree with Tucker Carlson on the issues, but no one should ever lose their mail. Joe will make sure the USPS receives the funding it needs to prevent this from happening, and end Trump and DeJoy's efforts to sabotage it so that people like Tucker can get their mail on time.

show feet, face in frame, holding today’s issue of the epoch times or i destroy the documents. you have 23 minutes. https://t.co/FJN66k7ZNM

Tucker coming on strong with the Dog Ate My Disinformation excuse https://t.co/IKPAAHEHCU