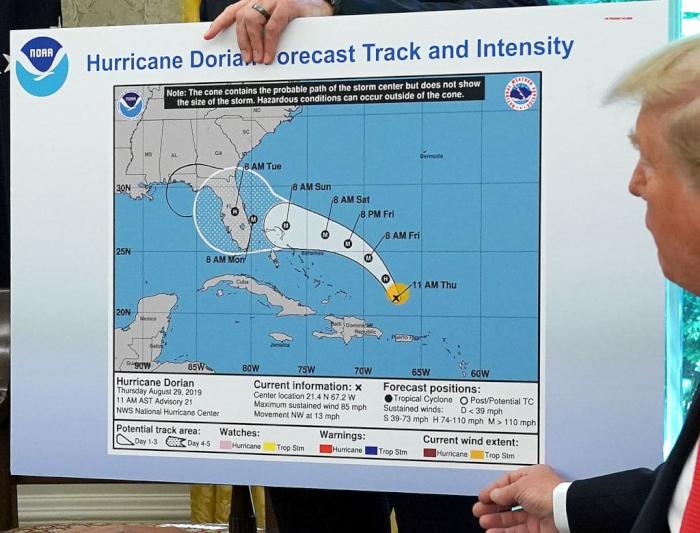 On September 4, 2019, another Day of Our Worst Timeline, President Trump presented a map of the expected path of Hurricane Dorian. However, something about the map seemed a bit… off. I know it sounds crazy, but it almost looked like someone used a Sharpie to extend the path of Dorian into Alabama so that a tweet they made previously wouldn’t be proven wrong.

This is NOAA’s map archive of Dorian as it headed toward the US. As you can see the forecast does not show the storm threatening Alabama on Sept. 1, the day Trump sent his false tweet. (You can watch the map in motion below) https://t.co/dNbi1QTPpu pic.twitter.com/NHrugTrWM5

In true Twitter fashion, the mocking was fast, furious, and fantastically on point.

And the fake news even said my ass was big. #TrumpSharpie pic.twitter.com/mls4Bnxkfj

2019: when "Old man yells at cloud" is not a meme, it's legitimate White House news for 3 days.#sharpiegate#TrumpSharpie#Sharpie
# pic.twitter.com/Sh4KUDW4Mu

Looks like Mexico sent that check for the wall #TrumpSharpie pic.twitter.com/koEqgHx8dk

I don’t care what you all say. He is definitely looking much thinner. And taller. The evidence speaks for itself. #TrumpSharpie pic.twitter.com/iQwTcgSzQz

Add it to his list of offenses, honestly. Then continue weeping.

“18 U.S. Code 2074: Whoever knowingly issues or publishes any counterfeit weather forecast or warning of weather conditions FALSELY REPRESENTING SUCH FORECAST…published by the Weather Bureau, USSS shall be FINED…or IMPRISONED.”@SpeakerPelosi IMPEACH THE LIAR! #TrumpSharpie pic.twitter.com/KAzaHoYB4B