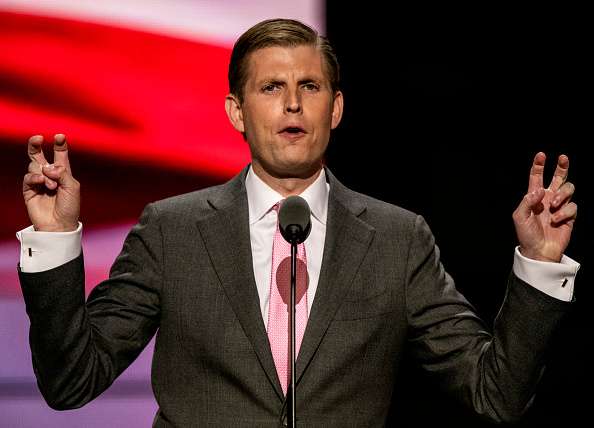 Trumpdates: 'My Daddy Helped Build the Log Cabin That He Was Born In'

.@jonkarl: "[Dr. Fauci] was more than willing to join us, but the White House wouldn't allow you to hear from the nation's leading expert on coronavirus. In fact, they wouldn't allow any of the medical experts on the president's own coronavirus task force to appear on this show." pic.twitter.com/KjWYqkdvUR

— You know how sometimes you wake up with a great idea at 3 a.m. and are so convinced of the idea’s greatness that you write it down, only to return to it the morning after and realize it was total gobbledygook? That’s this idea, that Trump nearly went through with.

… “he ultimately did not go ahead with the stunt.”https://t.co/W5axSRoK55 pic.twitter.com/ya6YXeVtAh

— This reminds me of a joke that my grandfather used to make often: “I helped my Daddy build the log cabin I was born in!”

Eric Trump, who is clearly not an expert in these matters, repeatedly claims his father's recovery from coronavirus is a result of "vaccines" his father created, which is false — he took therapeutic drugs but not vaccines, and certainly has played no direct role in creating them pic.twitter.com/mN1WrrkTg1

— I am here for the Jake Tapper of the last few weeks, who has been attacking the hell out of Trump’s moral character.

Tapper on Trump resuming rallies: "POTUS is seemingly indulging ego at the risk of prolonging the pandemic & at the expense of human lives … history is not going to be kind to the people around the president who are enabling any of this. It is, frankly, immoral." pic.twitter.com/SvRIbfJo9n

— If the South Carolina election were based purely on the ability to raise money, Jaime Harrison would win in a landslide. Remember, however, that the record that Jaime Harrison is breaking here belongs to Beto O’Rourke, who lost. In other words: Vote, South Carolinians. Vote your goddamn faces off.

“This is the highest quarterly amount raised by a Senate candidate in US history.” https://t.co/CMNXkp129H

— Early voting, by the way, is going well.

— Amy Coney Barrett’s opening statement (which will be read tomorrow) is the usual bullsh*t from conservative judges, who castigate activist liberal judges while making clear value judgments themselves based on their readings of the ephemeral originalists texts.

NEW — Amy Coney Barrett’s opening statement. Notable line: “The policy decisions and value judgments of government must be made by the political branches elected by and accountable to the People. The public should not expect courts to do so, and courts should not try.” pic.twitter.com/Uvuqlgn4km

1:00 — Anyone who is familiar with The Villages knows what a big deal this is. It’s not only a hotbed for conservative old folks, but also of venereal disease!

Last fall, Trump picked The Villages to promote his support for Medicare and its private insurance option

But on Wednesday, an armada of 500 golf carts gathered there to caravan to the nearby elections office, so folks could drop off ballots for Biden https://t.co/PMxqF8BXOm

12:13 — Last night, ahead of the debate between himself and Jaime Harrison, Lindsey Graham inexplicably refused to get a COVID test, though everyone else — the candidates, the moderators — did. It forced a format change, but more importantly, why did Graham — who had sat near Senator Mike Lee, who has since tested positive — refuse the test? Is it because he knows he’s positive? Is it because if he tests positive, it will delay the confirmation hearings of Amy Coney Barrett?

It’s a mystery. What’s not a mystery? This statement:

What in the fuck? Note that the question asked was, “How will you address civil unrest in South Carolina?” https://t.co/AY6LZuyiHZ

Honestly, I don’t know if this helps Graham or hurts him in South Carolina. It certainly reveals more about his character, though.

— Chris Christie was released from the hospital this morning. He was hospitalized for a week.

— In Texas, a federal judge (appointed by Obama!) struck down a proclamation saying that there could only be one ballot drop-off box per county, which is a big win for Democrats.

Bottom line: after four years of “Fire and Fury” and “We fell in love”, North Korea has more nuclear weapons and a more advanced ballistic missile program. https://t.co/97e5q340Wo

— Trump’s holding a rally at the White House today with, reportedly, 2,000 folks. He is still contagious.

3:00 — Three things: 1) Trump was on Rush Limbaugh so long that Limbaugh had to shoo him off.

AFTER TWO FULL HOURS CHATTING W RUSH LIMBAUGH, it is Limbaugh who finally tries to wrap Trump, saying: "I know you’ve got a jam-packed day left on your schedule…"

Secretary Pompeo tells Fox he’s working to get more of @HillaryClinton’s emails out before the election.

PERINO: Will that happen before the election?

POMPEO: Doing it as fast as we can. I certainly, I certainly think there'll be more to see before the election

This is the best thing I've seen in a while. @KamalaHarris's Indian uncle.

1:40 — Trump has been talking to Rush Limbaugh for an hour and a half. Again, not a serious person, so nothing that Trump says matters, except that LeBron is a good basketball player. That is not fake news (he’s also aggrieved because Paul Ryan is on the board of Fox News, and therefore, Fox News no longer loves Trump, which … has he not been watching Fox News?)

Pres Trump, now 90 minutes into a radio interview with Rush Limbaugh, acknowledges that LeBron James is a "good basketball player" but criticizes him for being a spokesman for Democrats.

12:00 — I dunno, y’all. Nancy Pelosi introduced a bill today to establish a “Commission on President Capacity,” which would allow Congress to intervene under the 25th Amendment when it believes that the President is unfit to serve. There is no chance that the bill will pass (although, if it did pass, the Republicans would use at their first opportunity after/if Biden is sworn in). Pelosi is just trolling Trump, which is to say: This is just political theater. I don’t see what Pelosi or the Democrats gain by it, so I don’t really understand what purpose it serves.

This is the home of Joseph Morrison, one of the Michigan men recently arrested for his plot to kidnap Gov. Gretchen Whitmer.

Can we acknowledge that maybe economic circumstances play a role in radicalizing people? pic.twitter.com/zCbNjaZ10B

It’s nonsense, of course. That house would have been the nice one in my neighborhood growing up, and that’s leaving aside the thousands of dollars spent on firearms. Folks are also dragging Donald Trump Jr. for asking why you never see an American flag in a yard with a Biden sign, which is obviously bullshit, but the thing that everyone rightly brings up is that you never see a Confederate flag in a yard with a Biden sign, and the above is a pretty good example of where you are likely to find Confederate flags in Michigan, which … wasn’t in the Confederacy.

Elsewhere, there’s another NYTimes report on Trump’s taxes, and this one again illustrates how easy it might be to indict Trump for tax fraud once he is elected out of office.

"Unless the payments were for actual business expenses … claiming a tax deduction for them would be illegal. If they were not legitimate and were also used to fund Mr. Trump's presidential run, they could be considered illegal campaign contributions." https://t.co/uA9PAIT4VA

Oh, and finally: Seth told me to add this from Mike Schur. It’s a good point.

Has Donald Trump said anything about the health of:

his wife
his friend Chris Christie
Senators Tillis, Johnson, and Lee
his campaign manager Bill Stepien
his body man Nick Luna
his speech writer Stephen Miller
the 4 + residence staffers
anyone but himself?

Honestly, I don’t care if he’s sick or not. I don’t care if he dies or not. All I care about getting him the hell out of office. Anything that Donald Trump says on Fox News with Tucker Carlson will be of interest only to the people who already support Donald Trump, and I have given up the illusion that their minds can be changed.

I’m also in a pissy mood because of NYTimes’ The Daily podcast this morning. They went to a blue-collar Pennsylvania county, where everyone is still a Trump supporter, despite the fact that it used to be a Democratic stronghold. And their story is very similar to one I have told here before, about a New Hampshire voter. He was an unhappy, overweight man with some congenital disorders. My father-in-law was a poll worker in 2016, and when that man — who honestly had probably been made fun of and shat upon all his life — handed his ballot to my father-in-law, he said to him with as much disgust as he could muster, “This is from one of the deplorables.”

I cannot stress how often that “basket full of deplorables” comment is referenced in these “white working class” stories, and it distresses the hell out of me because there is a very chicken-and-egg problem here. All of these Trump voters who once voted for Obama think that the Democrats look down on them and think they’re all racist, and the thing is, they really are racist and we do look down upon them, but they also don’t think they’re racist because they believe that anything short of an actual lynching does not constitute racism. There was a guy on that podcast who literally said that he’s not a racist because he likes baseball and “90 percent of them ballplayers are Black.”

But we are also a party that has basically given up on the “deplorables” because they are lost causes, and when they’re sticking 57 Trump yard signs in their yard and worshipping Q and saying things like, “I’m not racist because I watch baseball,” then it feels like giving up on them is the only thing we can do, which also sucks because we used to be the party of the blue-collar union worker, and we still are, but those blue-collar union workers in Pennsylvania think that Joe Biden is being controlled by Nancy Pelosi, who — uh — is as moderate as Joe Biden, so what’s the problem, except that she’s a woman? So, instead, they worship a billionaire who shits on gold toilets. I mean, how far gone are they that they will vote for a man who cheated his way into an Ivy league colleague and makes fun of Joe Biden for going to a lesser college while they most of Trump’s white working class voters didn’t even go to college?

Anyway, I’m mostly like, “F**k em,” but also, that’s exactly why they hate us because we have given up on them, but also, they’re Trump supporters, which necessarily makes them racist, xenophobic bigots, so again f**k em.

No, but really: Fuck them. They are deplorable.

This is our first look at four of the suspects state and local officials say targeted Governor Gretchen Whitmer.

And not to judge a book by its cover, but give me a f**king break, Laura. They look exactly like every Trump supporter in the midwest. These are your viewers, lady. You have helped to radicalize them. You are making millions of dollars off the backs of these “deplorables,” and you wouldn’t spend 20 seconds in a room with them without calling security. Take some responsibility, you asshole.

Laura Ingraham claims the people involved in the plot to kidnap Whitmer look like anarchists and not right-wingers pic.twitter.com/fSV0ESc30X

← It's Time to Catch Up On 'Snowpiercer' Because Season 2 is Coming Soon | Bill Burr Host 'SNL,' and He Bill Burrs All Over the Place →