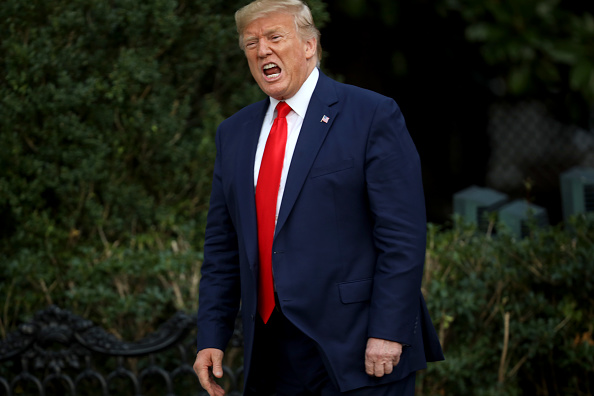 If there’s any way in the world to overturn the election results, Donald Trump is determined to find it. There isn’t, at least not without a tremendous amount of help that is clearly not coming, but that hasn’t stopped Trump from trying to find a way, even as his obsession with remaining in office — to the exclusion of everything else — has made him even more ineffective than usual.

Trump is also alienating even those who have been most loyal to him for refusing to go along with his conspiracy theories. That means he’s turned against Bill Barr — who gave his last press conference before resigning yesterday, saying that there was no election fraud and no reason to open up an independent investigation against Hunter Biden. Trump is also trashing Mitch McConnell now. Trump sent — through his personal assistant — a PowerPoint slide to Republican lawmakers showing that Trump was the reason why McConnell won his Senate race in Kentucky (Trump is not the reason McConnell won in Kentucky; it being a blood-red state is why McConnell won in Kentucky). At the top of the PDF slide, in red letters, were the words: “SADLY, MITCH FORGOT. HE WAS THE FIRST ONE OFF THE SHIP!”

McConnell doesn’t give a shit about Trump. Trump has been McConnell’s puppet for the last four years. Having lost the election, the only use that McConnell has left for Trump is the Georgia runoffs, but I expect that after January 5th, McConnell will give up the pretense. That said, the slide was less for McConnell and more for the other GOP lawmakers who have to run for reelection in 2022: It was a warning to all of them to remain loyal to him, or Trump will kneecap them in 2022. To wit: 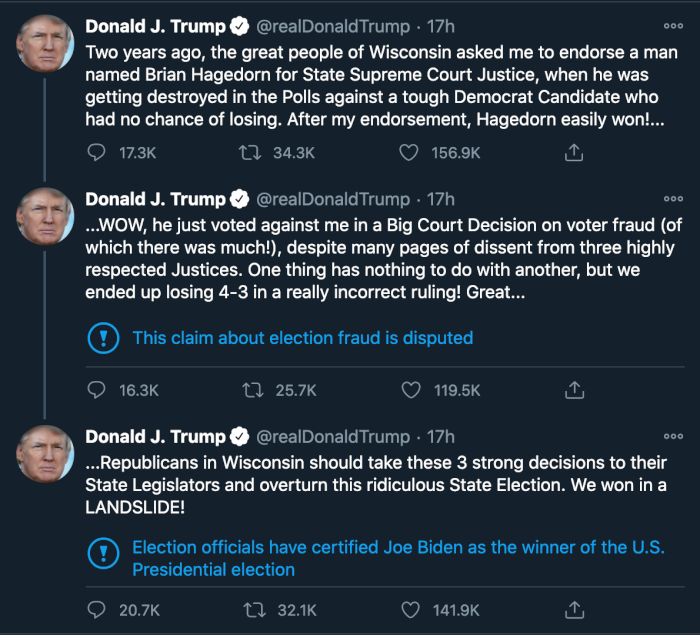 The funnier/scarier problem is Mike Pence, who will have to validate the election results on January 6th, per his Constitutional duty. Trump, however, will see that as the ultimate betrayal, and Trump is already starting to turn against Pence because a Lincoln Project ad has gotten into his head, according to Axios.

You think Donald has any clue where Mike Pence will be on January 6th?https://t.co/wieIq4cYDk

The Lincoln Project is a grift, but that ad effectively got under Trump’s skin. Trump, meanwhile, has also turned against his chief of staff Mark Meadows, White House counsel Pat Cipollone, and Secretary of State Pompeo. He’s basically done with everyone now except Sidney Powell and Rudy Giuliani, although the White House staff is long past wanting to deal with Giuliani anymore.

The Guardian characterizes the remaining team around Trump as such:

In the final month of Donald Trump’s time in the Oval Office, he has at last assembled his own team of outsized odds and ends, self-aggrandizing wingnuts, and brainless lumps of gelatin. You can decide for yourself if this latest incarnation of his “elite strike force” of advisers is more likely to launch all the nuclear weapons or make a fresh cup of coffee.

They’re not going to quit until January 20th, and even then, some are still reporting that Trump has said that he may refuse to leave, which — again — is what we all want to see, because nothing will make (a slim) majority of this country happier than to see that man dragged out, kicking and screaming.

← Thanks, Centrists ... ? | Confederate Statue of Robert E. Lee Removed From The Capitol →