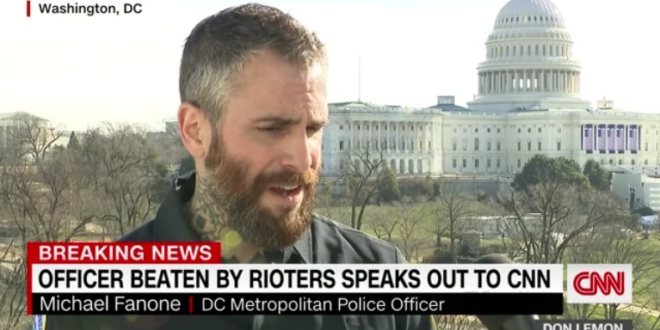 Transition Updates: D.C. Police Officer on the Rioters: 'Thank You, But F**k You'

10:30 — Interesting footage here from one of the rioters, which shows the police officer Eugene Goodman leading the mob away from the Senate Chamber. It turns out, too, that they missed Mike Pence by mere seconds.

Wow. First time I’m seeing video *taken by one of the first rioters* to breach the Capitol and storm up the Senate steps. I actually recorded him as he was recording me on the first floor.

“Where are they counting the votes?” one is heard shouting https://t.co/6uvvBznma0

EXCLUSIVE: The rioting criminal mob came within 60~ seconds of seeing Mike Pence on Jan. 6.
And they were just 90 feet away from a small office where Pence was hiding, before a cop steered them away.

Goodman is not speaking to the press, although lawmakers want to award him the Congressional Gold Medal.

— Trump will leave the White House with a lower approval rating than George W. Bush, which is actually remarkable given the situation the country was in when Bush left. The difference is, I guess, that it took Bush eight years to drive his approval rating into the dirt, while it only took Trump one term.

— Meanwhile, the Trump administration gave permission to release the vaccines held in reserve for seconds shots. But, um, there was no reserve:

When Health and Human Services Secretary Alex Azar announced this week that the federal government would begin releasing coronavirus vaccine doses held in reserve for second shots, no such reserve existed, according to state and federal officials briefed on distribution plans. The Trump administration had already begun shipping out what was available beginning at the end of December, taking second doses directly off the manufacturing line.

9:30 am — There’s not a lot of new news to report this morning. As most of you are aware, far-right groups are planning protests and assaults before, during, and after the inauguration, although there is some reason to believe/hope that some of the wind will be knocked out of the sails of the QAnon believers once Biden is sworn in. If he is, that will mean that their theories had not transpired. 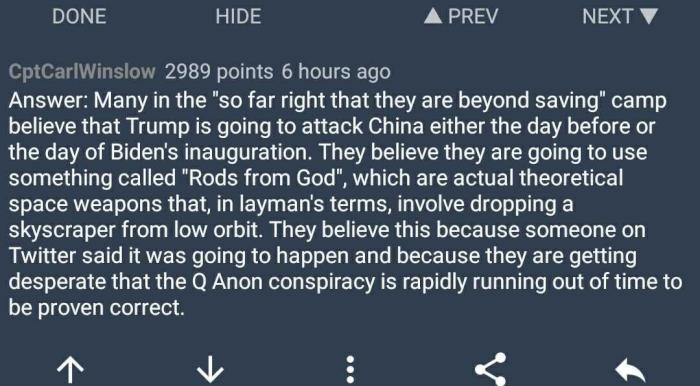 This, meanwhile, is a must-watch from a D.C. police officer who was attacked by the rioters last week. Stick with it until at least the 2:05 mark. “Thank you, but f*ck you.”

"Kill him with his own gun."

An officer describes what the rioters said in the moment he lay on the US Capitol floor after having been Tasered several times in the neck.https://t.co/beqHeODNH2 pic.twitter.com/3525YG4Rdh

— As his second impeachment hearing nears, Trump can’t find anyone to defend him, and he’s soured on Giuliani. I’m sure it doesn’t help when he refuses to pay even Giuliani. Also, with all his debt piling up post-Presidency, will he even have money to pay a decent lawyer? This time around, Chuck Schumer will be leading the proceedings instead of Mitch McConnell, so that’s a nice change.

— Meanwhile, others in the Trump Administration cannot land jobs. They are toxic. Maybe that $600 check Trump gave them will help!

— Speaking of which, Biden did propose a $1.9 trillion stimulus bill last night, one that would provide another $1,400 in direct payments, enhanced unemployment benefits of $400 a week, more state and local aid, plus money for vaccinations and reopening schools. It should pass the House but still faces an uphill battle in the Senate.

— Speaking of the coronavirus — hey! Remember the deadly pandemic?! — the numbers have leveled off to around 240,000 infections a day and 4,000 deaths. That’s bad. Really bad. Many states, however, are now moving toward phase 1b in their vaccination plans (that phase is different depending on the state, but it’s probably some mix of people over 70 and/or essential workers and/or people with underlying conditions). The patchwork of rules and regulations among states means that in a state like New Jersey, smokers can get the vaccine before teachers, which seems … unfair but also sensible given the risk of death posed to smokers.

— A number of outlets (including NPR) are talking this morning about the future of the Republican party, and how it seems like the “grassroots” (openly racist) and the “establishment” (privately racist) will never made amends, and that the party is in a death spiral after Trump became the first President to lose the White House and both houses of Congress in one term. Trust me on this: The Republican party is going to be just fine. They’ll find someone to hate — probably a woman, or a person of color, or both (AOC) — and rally together around that. I mean, not for nothing, but our collective hatred of Donald Trump also did the impossible: It brought Bernie and Hillary people together. I mean, sort of. They stood side-by-side at a respectable distance and kept their eyes faced forward.

The bigger problem for the Republicans, really, is that they have lost a lot of their corporate backers, and the 147 House and Senate Republicans who voted against election certification may never get those fundraisers back. Also, the GOP lost their biggest donor in Sheldon Adelson, who died earlier this week. The NRA has also been kneecapped by corruption and, well, mass shootings.

— Don Jr. is going to be questioned over misuse of inaugural funds and could face criminal charges. Donald Trump’s use of pardons is still up in the air, as they pertain to himself and his family members. Some say he will pardon himself and his whole family before Wednesday; others say that he exposes himself to more legal liability if he pardons himself, so he won’t pardon anyone out of spite.

— Today’s NYTimes The Daily podcast is a good one. They interview Republican Peter Meijer, who replaced Justin Amash (the Michigan Republican who left the party) and then basically dashed his hopes of reelection a week into his term by voting to impeach Trump. It’s an illuminating interview.

— It’s a good Reply/All this week, too, as Alex and PJ talk with Alex Goldman about Twitter’s decision to ban Donald Trump.

← Chris Rock Almost Played George Constanza on 'Seinfeld' | In 'News of the World,' Tom Hanks Is at His Tom Hanksiest →