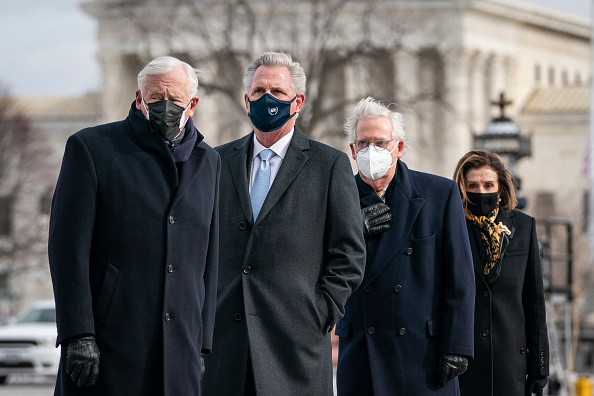 Today, the GOP Will Decide How Openly Racist It's Going to Be

Last night, the Republican party voted anonymously over whether to strip Liz Cheney of her leadership position in the House. In a secret vote, the House voted 145 to 61 to keep Cheney in her leadership position. That is to say: Because the vote was secret, and because the former President would not know who voted for or against, the GOP could vote their conscience. Only about 30 percent of the Republican House allied with Tr*mp on that vote.

Today, I suspect, that vote will look much different when applied to Marjorie Greene. The House will vote on whether to strip her of her committee assignments, and the GOP will have to put their votes on the record. That not only means deciding whether to align themselves with QAnon but also, whether to align themselves with the House’s Tr*mp proxy. I suspect that the vote will look much different, which is to say: The GOP privately aligns itself with Liz Cheney but publicly will align itself with Greene.

Of course, they will try — and in fact, already are attempting — to play a game of whataboutism here. They’re trying to equate Marjorie Greene’s calls to execute Nancy Pelosi, or her beliefs that school shootings were false flag operations, with insensitive comments made by Ilhan Omar or Eric Swalwell’s inadvertent ties to a Chinese spy. These are not the same. These are not in the same league. It’s f**ked up to even to suggest as much.

“Republicans will do anything to distract from the fact that they have not only allowed but elevated members of their own caucus who encourage violence. It’s time to stop whitewashing the actions of the violent conspiracy theorists, who pose a direct and immediate threat to their fellow Members of Congress and our most fundamental democratic processes,” Ilhan Omar said in a statement.

The concern here for Democrats, however, may be what might happen if the Republican party takes back control of the House in 2022. The Democrats reasonably are calling for MTG to be pulled from her committees, but the GOP often doesn’t act reasonably; they act in accordance to the wishes of their racist base, who will want to use their power to strip Ilhan Omar, Rashida Tlaib, Eric Swalwell, and probably even AOC of their committee leadership positions, purely out of spite. That’s how the GOP operates.

But the best defense is a good offense, and the best way to ensure Democrats hang on to their slim majority in the House is to force the Republican parties to choose between Cheney and Marjorie Greene, on the hope and belief that enough voters will not ultimately align with Greene.

It’s a gamble because they just f**king might, although when we think about those swing districts — the places where people like Abigail Spanberger and Conor Lamb won narrow victories — it’s hard to imagine more than 50 percent of the people in those districts deciding to align themselves with Marjorie Greene’s extremism. Ultimately, I think that Pelosi is making the right strategic move, but if the Democrats are going to go down this road, they better make good and damn sure that we don’t allow QAnon conspiracy theories to be normalized, nor can we allow MTG or Boebert or any of those loons to cast themselves as the victims. They are not victims. They are terrorist sympathizers. Period.

Ultimately, I think we know how the Republicans will vote. Kevin McCarthy hinted at it last night by saying that Marjorie Greene condemned her own past statements (behind closed doors where none of us could hear it), and then ridiculously saying that he had no idea what QAnon even was (untrue, because he “condemned” QAnon in December).

They’re still scared of Tr*mp, which is bizarre given how little relevance he seems to have now that he’s out of office and no longer has access to social media. But as long as they continue down that road, I do believe the Conor Lambs and Abigail Spanbergers can hang on to their seats.