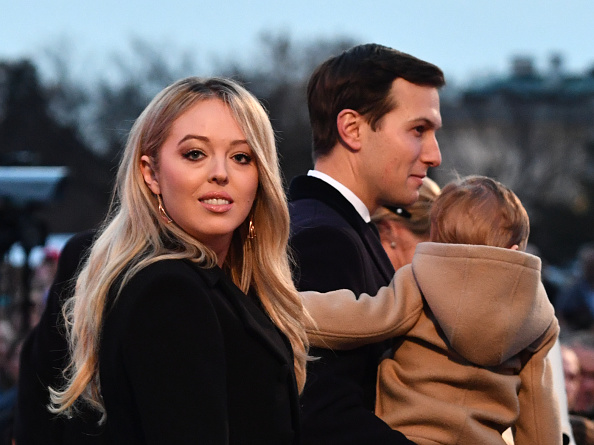 Back in 2016, I spent a couple of hours going through the Twitter feed of Marla Maples, Donald’s Trump ex-wife — and the mother of Tiffany Trump — to see if there were any subtweets about the election. Maples, like nearly everyone else who has ever crossed paths with Donald Trump, is under an NDA, so she couldn’t speak about her relationship with Trump or even apparently offer an opinion without putting herself at risk of a lawsuit (or even talk about how she might have cheated on Trump with Michael Bolton). She didn’t say anything about Trump directly, although her Twitter feed certainly suggested she would not approve of this version of Donald Trump. There was one tweet, however, that took on some added meaning when rumors floated that Maples had leaked one page of an old Donald Trump tax form.

ICYMI: "A now moment of introspection… Thoughts are such powerful things… Oh if people only knew mine…" https://t.co/pnO9jN9nkV

Turns out that the apple doesn’t fall far from the subtweet. As many may know, Donald Trump’s White House assistant Madeleine Westerhout was fired last week because she had a little too much to drink and said some things about Trump’s family in an off-the-record session with reporters. Apparently, some of those things involved Tiffany Trump, who Westerhout suggested Trump couldn’t pick out of a lineup, and that he doesn’t like to take photographs with her because she’s “fat.” Trump ended up firing Westerhout, but from what I understand, he didn’t really want to, because — as Westerhout suggested in that off-the-record chat — she was closer to the President than either of his daughters.

While Madeleine Westerhout has a fully enforceable confidentiality agreement, she is a very good person and I don’t think there would ever be reason to use it. She called me yesterday to apologize, had a bad night. I fully understood and forgave her! I love Tiffany, doing great!

There he is reminding Westerhout of that NDA, too, although as I recall, those NDAs are not enforceable as they pertain to White House employees. I really hope Westerhout — who reportedly cried the night that Hillary lost — goes full blast on Trump, although I expect that — in the end — she’ll probably take whatever money they have to offer her to sign an NDA that’s actually enforceable.

In any respect, in an Instagram story posted by Tiffany Trump over the weekend, she maybesortakinda addressed the issue by posting a quote from Ancient Persian poet Rumi: “Study me as much as you like, you will never know me. For i differ a hundred ways from what you see me to be. put yourself behind my eyes, and see me as i see myself. Because i have chosen to dwell in a place you cant see.”

Short version: “YOU DON’T KNOW ME.” It’s true, too: She’s probably the only Trump who even knows who Rumi is. Also, maybe it’s Tiffany — a Georgetown law student — who doesn’t want to take photos with her father? I mean …


← Justin Bieber Gets Candid About Drug Use, Depression, Fame on Instagram | Timothée Chalamet Kisses Fan's 'Call Me By Your Name' Tattoo At Venice Film Festival →