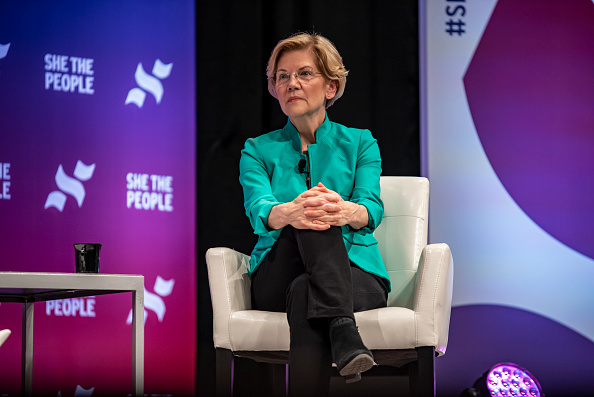 This 'NYTimes' Piece on 'Anxious Democrats' Is Such Bullshit

How many people entered the race for the 2020 Democratic nomination? Twenty-four or 25? More than we can count, representing the entire Democratic spectrum, from progressive (Bernie, Warren) to moderate (Biden, Klobuchar) to woo-woo (Marianne Williamson) to possible Russian agents (Tulsi Gabbard). Point is: We’ve had no shortage of options. Several of us have had so many options that it took us a while to settle on one, and some of us still haven’t made a definitive decision: I loved Pete Buttigieg enough to order a t-shirt, but lost interest by the time it arrived; I have a Kamala shirt, which has sadly fallen to the bottom of my shirt drawer. I even occasionally flirted with Bernie and gave Julian Castro a real look before settling on Elizabeth Warren for good.

I am actually happy with the choices we’ve been offered, and in a lot of the also-rans like Jay Inslee and even Eric Swalwell, issues like the environment and gun rights have been brought to the fore. Andrew Yang has successfully given visibility to universal basic income. Beto counts as at least three different candidates since he announced (and Buttigieg as two). Cory Booker has given it a real college try. Kirsten Gillibrand brought a lot of attention to reproductive rights. All things considered, it’s been a pretty great roster of candidates, and I feel like whoever comes out of this as the nominee will be well-positioned to defeat Donald Trump (and with 50 percent of the country supporting the removal of the President, I feel like even Tim Ryan could win).

The NYTimes, however, is reporting that Democrats are “anxious” about our choices.

When a half-dozen Democratic donors gathered at the Whitby Hotel in Manhattan last week, the dinner began with a discussion of which presidential candidates the contributors liked. But as conversations among influential Democrats often go these days, the meeting quickly evolved into a discussion of who was not in the race — but could be lured in.

Would Hillary Clinton get in, the contributors wondered, and how about Michael R. Bloomberg, the former New York mayor? One person even mused whether Michelle Obama would consider a late entry, according to two people who attended the event, which was hosted by the progressive group American Bridge.

It’s that time of the election season for Democrats.

Is it really that time of the election season? Are we really anxious? Or are we just basing the anxiety of an entire party on six Democratic donors? Would Michael R. Bloomberg make a difference? (no) Would Hillary Clinton? (No, and no one — except for Donald Trump — wants to revisit 2016). Would Michelle Obama? Oh, well: I mean, yeah. She’d win in a landslide, but that’s not going to happen, and that’s OK, because we have a formidable slate of candidates, including a lifelong progressive from Vermont who has already run a Presidential campaign, a Senator from Massachusetts by way of Oklahoma who created an entire federal agency, a former vice president, a billionaire that no one’s ever heard of, a tech entrepreneur, a gay mayor from the midwest with a military background, a veteran midwestern Senator, an awesome California Senator who really could make a late run if the party decided collectively to give her a second look, and a very serviceable New Jersey Senator.

I am confident that whoever ends up our nominee will be able to defeat Trump. According to the Real Clear Politics average of polls, at this point, Biden is beating Trump by 7 points; Warren by 5.2 points; Sanders by 5.3 points; Buttigieg by 2 points; and Harris by 1 point. They all need to do some work to shore up certain constituencies, but I am confident that any one of them (even Tulsi!) would be a better option than the one we currently have in the White House.

I don’t have any anxiety about our choices. Most people do not. I do find it interesting, however, that this “anxiety” springs forth just as a female candidate has begun to solidify her frontrunner status. Maybe those Democratic donors just aren’t all that happy with a candidate who is a threat to the donor class, the billionaires, the Silicon Valley entrepreneurs, the oil and gas industry, and Wall Street. Maybe they’re anxious because Warren won’t take their big-ass checks, which makes it awfully difficult for them to buy her influence. Maybe they’re anxious because in 2020 they will no longer matter.


← Kate Beckinsale Does NOT Have A Fake Leg, Does Believe She Looks Exactly Like Ryan Reynolds | How the Hell Can We Watch Kevin Smith's 'Jay & Silent Bob Reboot'? →