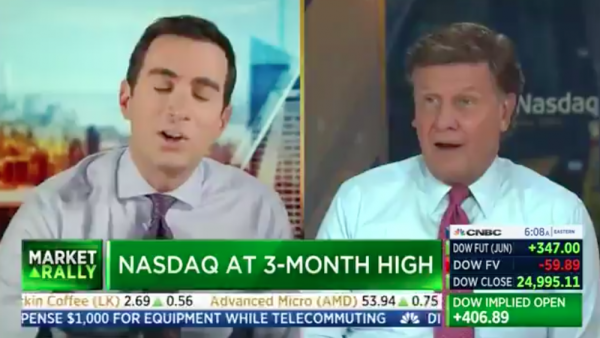 Watch: This Guy Yelling at the Other Guy on CNBC is Immensely Satisfying

I don’t know who Joe Kernen is, except that he’s the older guy, a Trump supporter and host of CNBC’s Squawk Box, which is a financial news show I have never watched.

I do know who Andrew Ross Sorkin is, although I only clicked because I saw the name “Sorkin” and I involuntarily rolled my eyes and clicked before my brain could process which Sorkin he was. This Sorkin is the other anchor of Squawk Box, as well as the guy who wrote Too Big to Fail, and co-created Showtime’s Billions.

Andrew Sorkin has run out of fucks. pic.twitter.com/NBFNmqvTnx


← Good News In Entertainment: 'What We Do In The Shadows,' Lisbeth Salander, Mel C, And Gary Busey | Let's Decode That Tatler Piece on Kate Middleton →