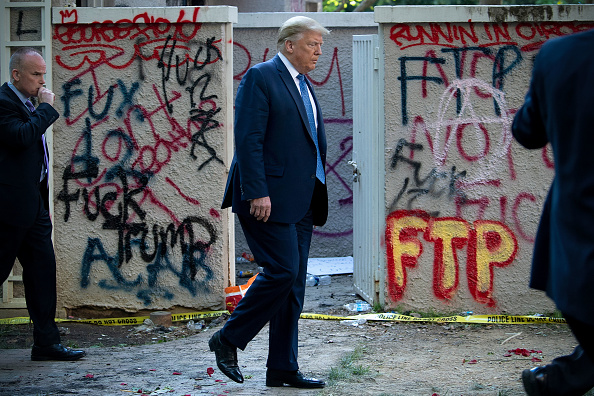 The President's Polls Are in the Tank, and He Knows It

How do you know that Donald Trump knows his re-election prospects are fading? He’s desperately trying to reignite the Colin Kaepernick controversy in the NFL by going after Roger Goodell for his “support” of Black Lives Matter (and attacking Drew Brees for apologizing):

Could it be even remotely possible that in Roger Goodell’s rather interesting statement of peace and reconciliation, he was intimating that it would now be O.K. for the players to KNEEL, or not to stand, for the National Anthem, thereby disrespecting our Country & our Flag?

He’s bashing Colin Powell — who, among other Republicans — has vowed to vote for someone other than Trump:

Colin Powell was a pathetic interview today on Fake News CNN. In his time, he was weak & gave away everything to everybody - so bad for the USA. Also got the “weapons of mass destruction” totally wrong, and you know what that mistake cost us? Sad! Only negative questions asked.

Also among those Republicans? Mitt Romney, who became the first Republican to march with Black Lives Matters protestors yesterday. Here, Trump is trashing Romney as an opportunist:

Tremendous sincerity, what a guy. Hard to believe, with this kind of political talent, his numbers would “tank” so badly in Utah! https://t.co/KqHsHmSRKo

He’s not wrong about that, but this — along with putting his name in the hat for Trump’s Secretary of State — was the biggest example of Romney’s naked opportunism:

Trump is also out there retweeting bots:

Really, though, we know that Trump knows his numbers are in the tank because he’s admitting it:

If I wasn’t constantly harassed for three years by fake and illegal investigations, Russia, Russia, Russia, and the Impeachment Hoax, I’d be up by 25 points on Sleepy Joe and the Do Nothing Democrats. Very unfair, but it is what it is!!!

Just how bad are those numbers? The latest CNN poll has Trump down by 14 points:

The numbers are so bad right now that the Electoral College cannot save him: He’s down by 12 in Michigan, and down by 40 points among Independents there. A Fox News poll has him down by 9 in Wisconsin. He’s up by four in Arizona (and the Democratic Senator is up by 13 over the Republican incumbent there). Among all battleground states, Trump is up by a combined 8 points. Hell, he’s only up by three points in Utah.

Of course, Charlotte Clymer here is right: Take nothing for granted. Trump will use every means necessary — legal or illegal — to ensure his reelection, up to and including cheating. And if he loses, the two months between the election and Biden’s inauguration may be two of the most terrifying months in a terrifying administration.

In the meantime, in order to improve his numbers, Trump is considering giving a speech later this week on race and unity, which is something that the President is completely incapable of. However, the White House Press is very good at ignoring the four previous years and saying something along the lines of, “The President’s tone has changed,” or, “He’s finally listening,” when he manages to successfully read from a teleprompter. The press — for all of their vows to improve this week — cannot resist a horse race, and you can bet your ass that it will try and manufacture one heading into November.