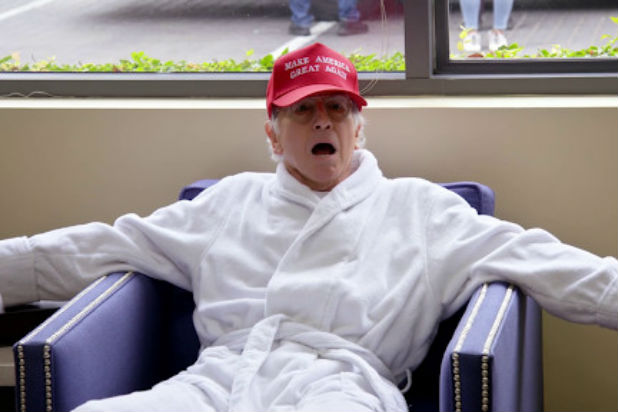 If you’re not watching Curb Your Enthusiasm this season, you’re missing … well, Curb is having an uncomfortable season even by Curb standards because Larry David is being sued for sexual harassment by his assistant and there’s a running joke about how Jeff Garlin looks like Harvey Weinstein and the way the show sort of mocks/dismisses sexual harassment as a series of misunderstandings on behalf of an overly sensitive feminist perfectly straddles that line between “that’s not OK” and “that is seriously fucked up.”

I’m not going to get into it, because I don’t want to deal with Larry David stans telling me I can’t take a joke. However, a few episodes ago, there was a funny subplot where Larry David discovered that wearing a MAGA hat could get him out of uncomfortable situations. For instance, he got roped into a lunch with a guy he couldn’t stand, so he put on a MAGA hat and the guy quickly made excuses and got the hell out of there because he didn’t want to be seen with a guy wearing a MAGA hat.

Meanwhile, later in the episode, this happened:

Larry David was literally mocking MAGA culture and Trump supporters, and here’s Donald Trump amplifying that to however many millions of people follow him on Twitter. This is a nice addendum:

I love Larry David with all my heart and soul. pic.twitter.com/OEDANgVLho

Meanwhile, Trump was loonier than usual in his Twitter rampage last night, surfacing more conspiracy theories (the “black ledger”), shitting on the FBI again, and being appalled because federal prosecutors recommended that his friend Roger Stone get 9 years in prison.

← Joe Biden Inexplicably Calls a N.H. Voter a 'Lying, Dog-Faced Pony Soldier' | Twitter Reacts To NASA #BroomChallenge, Which Yes Is A Hoax With No Tie To NASA →