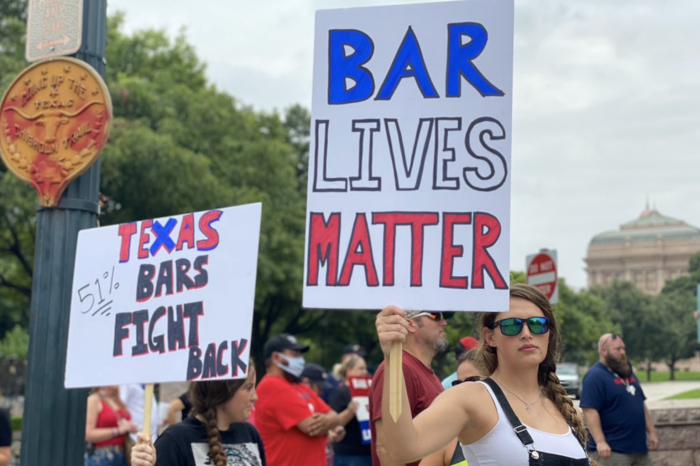 The Latest on the Coronavirus: More Positive Data on a Vaccine, and ... Bar Lives Matter?

Good morning. It is July 1st, 2020. It has been 110 days since Tom and Rita Day. We are halfway through the year, and if you will, just imagine what January 2021 could look like: A new President. A vaccine. Maybe even a Super Bowl. To get there, however, we have to get through the next six months, and consider what November/December might look like: A petulant, bitter, seething, angry President who has already been voted out of office inflicting punishment on the populace while the pandemic continues to rage along with the flu and, potentially, a new strain of flu. They are not going to make getting to 2020 easy on us.

In the meantime, I don’t know what to tell you, except that the Coronavirus pandemic is looking very bleak now, at least in terms of new infections. Yesterday saw 46,000 new infection. Dr. Fauci warned that, if we don’t get this under control, we could be seeing 100,000 new infections a day. In two weeks’ time, we could see what happened in Italy, and in NYC, happen simultaneously in California, Texas, Florida, and Arizona (Georgia, Tennessee, Arkansas, and the Carolinas aren’t looking great, either).

Fortunately, deaths do continue to decline, although they are a lagging indicator. The spikes in the new hot spots began around mid-June, so we will need to brace ourselves for a possible increase in deaths around mid-July. Hopefully, because many of these new cases are in younger people, and because medical professionals know how to treat it better, we will hopefully not see the spike we saw in April and early May.

Speaking of treatments, however, the United States has bought up the entire world’s stock of remdesivir for the next three months. “The Trump administration has now bought more than 500,000 doses, which is all of Gilead’s production for July and 90% of August and September.” That is actually pretty f**ked up. On the other hand, with potentially 100,000 new infections a day, we could burn through that in a matter of weeks.

In a lengthy thread, this guy — an oncologist and EIC of Blood Cancer Journal — is echoing something I’ve seen a number of people suggest, which is that basically the virus is just going to work itself through these hot spots before cratering, and that — with the exception of Iran, it seems — there have not yet been significant second waves in hot spots.

Almost everywhere COVID has raged, it has cratered. But it looks like almost every place has to peak first.

COVID has caused a lot of devastation & loss of life in every hotspot. But why does it crater? Is is because all these places took preventive measures? Masks?

There’s a lot of reasons for that: Maybe it infects much of the vulnerable population, or maybe it’s because it takes all of the infections and deaths for the population in those hot spots to take the disease seriously and mask up and social distance. It’s too bad we have to actually witness insane amounts of death and disease before we do something about it, as opposed to, say, Taiwan, which has been been opened up since February.

Good morning in sad, jealous tweets. All schools in Taiwan have been open since February. They did not listen to China or WHO in January and immediately masked up and shut down travel. They also traced the hell out of their outbreaks. They were practically done by February.

We are continuing to see that, in these hotspots, communities of color to suffer a disproportionate amount of infections and deaths. That said, rich-ass people showing their asses by holding backyard soiree fundraisers can also get the disease and spread it among the, uh, socialite community, as happened recently in D.C. Meanwhile, after a wedding in India, over 100 tested positive for the virus, and the groom died. Just stay away from large gatherings, folks. And bars, for God’s sake. There are so many stories going around right now about massive amounts of infections breaking out in bars, like this one, where 88 people got sick from one bar opening in Michigan. I have a lot of sympathy for bar owners and employees at bars — going to our regular bar is one of the things I am missing most — but keep them shut down until this is over. And in case you missed it yesterday, there was a “Bar Lives Matter” protest in Texas. Yes, I’m serious.

I went to undergrad with the “Bar Lives Matter” girl. :’-) In our history class freshman year she asked if everyone in the plane on 9/11 died. Then when our professor said yes, she yelled “OH MY GOD THAT’S SO SAD, WHY HAVENT WE LEARNED THIS??”

But listen: It’s not all bad news. In fact, there is some very good news to report. Pfizer has released early results from one of its ongoing trials, and it is very positive. From what I can decipher, the vaccine is safe(ish) but producing an amount of antibodies equivalent to those who have been infected. I believe that is what this means:

However, the vaccine has left some with fevers, especially those at the higher doses. Moreover, while the levels of neutralizing antibodies were 1.8 to 2.8 times the level of that in the recovered patients, it does necessarily mean there is immunity. Pfizer will find that out in Phase 3 trials, but in the meantime, they are ramping up production with an expectation of having 100 million doses by the end of the year, if the vaccine is successful.