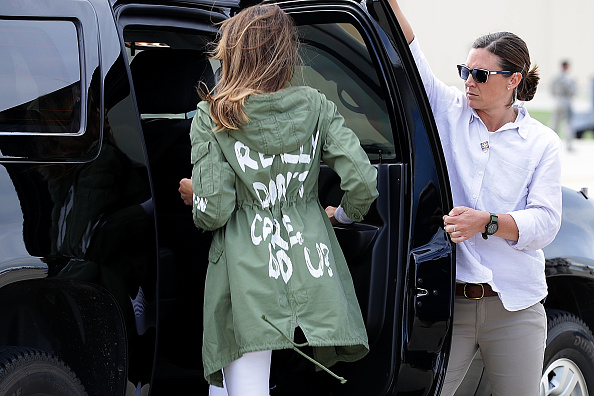 I understand that the President and First Lady’s positive infection is going to be the top story today and for the foreseeable future, but it’s worth noting all the stories that the diagnosis wiped off the front page this morning. Here’s a quick list:

— After Hope Hicks’ diagnosis was revealed, Trump seemed to blame it on the police and/or military:

Also appeared to blame a law enforcement or military member for giving it to her by insisting on hugging her (?) https://t.co/uUOC0FWlZZ

— In audiotapes CNN obtained from a former friend and senior adviser to the first lady, Melania can be heard complaining about decorating for Christmas. “I’m working like a — my ass off at Christmas stuff. You know, who gives a fuck about Christmas stuff and decoration?” The tapes, where she also lambasts the “liberal media,” basically paint Melania as exactly like her husband.

I try not to do this often but just *imagine* the reaction if Michelle Obama complained about decorating the WH for Christmas pic.twitter.com/e18fA63Eko

As for that jacket?

"The jacket was… a publicity stunt, and it was to garner the attention of the press, to make sure that everyone was aware that Melania was going to the border."

— Researchers concluded that the biggest driver of Coronavirus misinformation has been … the President himself. SURPRISE!

"Of the flood of misinformation, conspiracy theories and falsehoods seeding the internet on the coronavirus, one common thread stands out: President Trump.

"That is the conclusion of researchers at Cornell University who analyzed 38 million articles about the pandemic …." https://t.co/GutXc1bme7

— Trump insisted that Fox News’ John Roberts “abused” Kayleigh McEneny by asking her why Trump hasn’t condemned white supremacy (which Trump finally did do on Hannity):

"She was abused by John Roberts" — Trump says a Fox News reporter "abused" his press secretary by asking her to condemn white supremacists pic.twitter.com/gdTnTYpL3W

— Conservative nutjobs Jacob Wohl and Jack Burkman were finally arrested, and face four felony charges for intimidating voters and election fraud for thousands of robocalls to residents in urban areas trying to discourage them from voting.