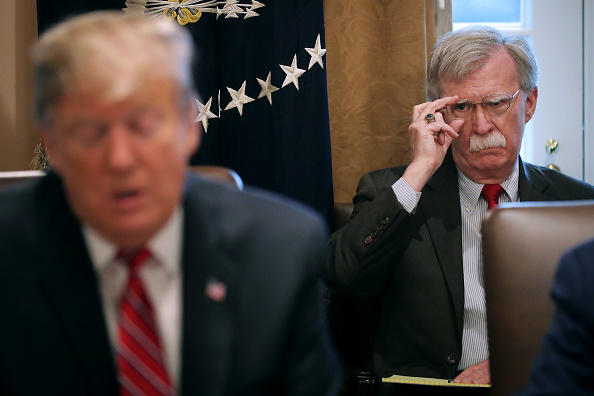 The Great Thing About the Bombshells in John Bolton's Memoir Is How They Don't Matter!

The New York Times got its grubby little hands (BOTH hands) on John Bolton’s memoir today, and it contains quite a bit of salacious information, and let me tell you something about it: It doesn’t matter.

No really, it doesn’t matter.

John Bolton, the former National Security Advisor who could have testified during Trump’s impeachment hearing and could have possibly made a difference, has decided instead to release his book months later, when it. does. not. matter.

What did Bolton have to say for himself? It doesn’t matter!

But here’s just a few revelations that, again, do not matter, because there’s not a f**king thing we can do about it now except for shake our heads disapprovingly, like Susan Collins watching President Trump murder a man with his bare hands:

— Trump pled with Chinese President Xi Jinping to increase agricultural purchases from the U.S. so that he could win the farm states. (It doesn’t matter).

— Bolton at one point met with AG William Barr to discuss Trump’s enthusiasm for doing favors for autocrats; Barr was like, “*shrug* Whaddya gonna do?”

— Trump promised Turkish President Erdogan that he would fix Turkey’s problems with the state-owned bank Halkbank, which was then under investigation in the United States (it doesn’t matter).

— During a meeting with North Korean Leader Kim Jong Un, Secretary of State Mike Pompeo slipped John Bolton a note that said: “[Trump] is so full of shit.” Pompeo also later said that Trump’s diplomacy with North Korea had “zero probability of success.” (It doesn’t matter, but also, I can’t wait for Trump to fire his ass)

—Trump suggested to President Xi that the two-term limit for U.S. Presidents could be repealed for him. Trump also told Xi that he thought building concentration camps in China was “the right thing to do.” (It doesn’t matter.)

— Bolton also took issue with House Democrats for being so focused on Ukraine during the impeachment, rather than expanding the investigation into Trump’s dealings with other foreign countries:

“These and innumerable other similar conversations with Trump formed a pattern of fundamentally unacceptable behavior that eroded the very legitimacy of the presidency. Had Democratic impeachment advocates not been so obsessed with their Ukraine blitzkrieg in 2019, had they taken the time to inquire more systematically about Trump’s behavior across his entire foreign policy, the impeachment outcome might well have been different.”

Say it with me again: It doesn’t matter!