Remember six months ago, when I would post a poll or two, and our readers would be, like, “It’s six months away! F**k you! The polls don’t matter!”

The polls matter now. I mean, maybe you can call their accuracy into question, although they were mostly right in New Hampshire, save for the surge of support for Klobuchar (among those who made up their mind on the day of the primary).

So, how is it looking nationally? There are three national polls out today, and they all show roughly the same thing: Bernie is ahead, Biden and Bloomberg are in a tussle for second place, and Elizabeth Warren comes in fourth in all three polls, ahead of Buttigieg and Klobuchar. From Axios:

So, there’s still marginally more support for the moderate lane than the progressive one, but again, unless Bloomberg, Biden, or Buttigieg drop out, Bernie will continue to win pluralities, and if he does so on Super Tuesday, it’s going to be very difficult for any of the moderates to catch up by the convention.

On the other hand, if Warren drops out, Bernie takes this in a cakewalk. I also know that there’s still a lot of people who dislike Bernie, but if you’re going to vote moderate, for the love of God, stay away from Michael Bloomberg. As Dr. Wilson here notes, he’s Competent Evil, which is dangerous as hell. And look at this:

I am heartbroken and infuriated that @MikeBloomberg felt it appropriate to refer to trans people as "it" and trans women as "men in dresses". His remarks are cruel, inexcusable and enable violence and discrimination against trans + non-binary folks. (1/6)https://t.co/RxKCL0B12N

Mike Bloomberg approved and oversaw a program that surveilled and tracked Muslim communities in mosques, restaurants, and even college campuses—leaving permanent damage. He refuses to apologize for it. https://t.co/oUDQIlySHn

Bloomberg is so bad that Meghan McCain thinks he’s evil, and do you know who her father is? Or her husband?

Ironically, the Bloomberg campaign texted me as I was drafting this post! 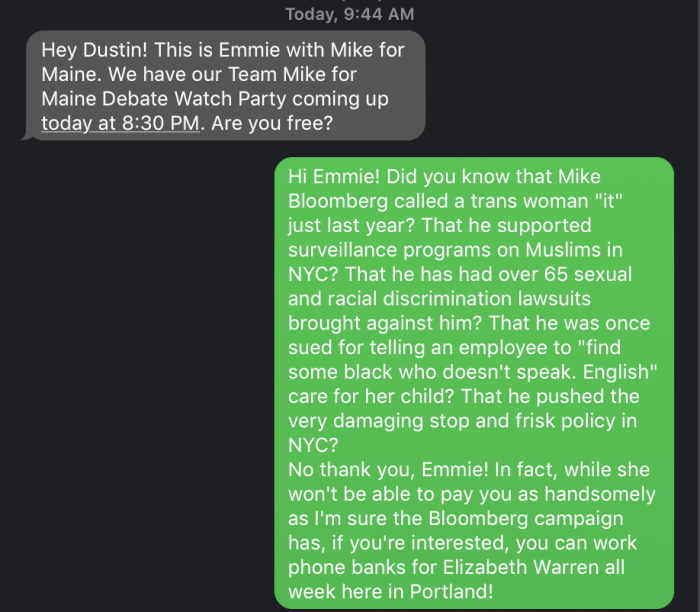 Will I vote for him if he wins the nomination? Uh yeah, sure. I guess. But come on: We can do better than f**king Michael Bloomberg, who probably now has me on a list.

Remember, above, how I said that Warren was fourth in all three polls? Ahead of both Klobuchar and Buttigieg? Well, here’s another poll showing how each of the candidates fares head-to-head against Trump, only guess who is missing? The Warren erasure is real (I saw somewhere on Twitter that the people who designed the polls said that they could only include 5 people in the poll. OK, cool. WHY ISN’T WARREN ONE OF THEM?)

And for their next trick… corporate media will make Elizabeth Warren completely vanish.

That’s good news there for all the Democrats, although national polls don’t mean a thing come November. What will matter will be Wisconsin, Pennsylvania, and Michigan. There are no recent head-to-head polls in Pennsylvania, but one from Wisconsin last week shows both Biden and Bernie in a dead heat with Trump, while in Michigan the latest head-to-head polls show all the candidates — but Bernie and Biden in particular — with a lead on Trump.

And here’s one thing I’ll say against this narrative that Trump will crush Bernie because he’ll paint him as a socialist: This is not new information. Bernie ran four years ago. His politics are not a mystery. His policy positions are already baked in. It’s like if Trump decided to use Buttigieg’s sexual orientation against him. Like, notwithstanding that one voter in Iowa, everyone already knows that Buttigieg is gay. It is not new intelligence! And these polls consistently show Bernie ahead of Trump in spite of what Americans have known about him for the last 4 years.

And here’s one thing I’ll say against Bernie: Release your damn medical records and don’t gaslight journalists by treating them like they’re insane people for asking. You’re 78. You just had a heart attack. IT’S A REASONABLE THING TO ASK.

Requests for this information is entirely legitimate and the Sanders campaign should not demean journalists for asking about it. https://t.co/7YrLdHkKwh

Bernie Sanders was the originator of what his press secretary is now calling a “smear campaign” against him pic.twitter.com/JsTExI1WBh

Seriously, Bernie: It’s not like this job gets easier once you become President. If your heart can’t take it, we deserve to know.

Finally: My favorite poll of the day: Susan Collins is in a “statistical tie with her Democratic opponent” according to the first poll of the season here in Maine. Her “Democratic opponent” is actually up by one point. This is big, because at this point, Susan Collins is still basically losing to “her Democratic opponent,” because Sara Gideon hasn’t even won the nomination yet, and the state doesn’t know her as well as Collins, who typically runs up the score come election day. In six months, voters will know Sara Gideon, too, and she is pretty fantastic, notwithstanding whatever mud Collins and the GOP can dig up on her.