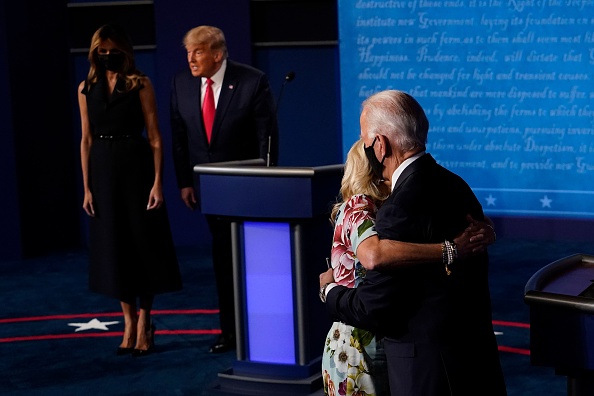 I do not have a tremendous amount to say about last night’s debate. I wish that the media could come up with a better narrative than, “Donald Trump was restrained in his performance,” because his manner of speaking is irrelevant to his policies and the destruction he’s wrought; he wasn’t that restrained by the end, and no one buys for a second that he is capable of maintaining it.

Also, it doesn’t really matter, because everyone has already made up their mind, and also, it will be all but forgotten by mid-afternoon because this is the Trump era. Remember when Rudy Giuliani got caught on a major film fondling himself in front of a young woman posing as a journalist? That was two days ago.

Anyway, here are some random thoughts on the debate:

1) I don’t know who needs to hear this, but fracking is bad. I understand the need to get votes in Pennsylvania, and I get why Biden would say what he is saying, but also, fracking is really f**king bad.

2) The oil and gas industry is also bad. I actually really did appreciate Biden saying that he would try and transition away from oil and gas and toward green energy. Texas, Oklahoma, and Pennsylvania may not like it, but y’all: If you could create more jobs by using wind and solar energy, which would have positive impacts on the world, why wouldn’t you do that? Oil and gas: Bad for the environment. Wind and solar: Significantly less bad for the environment. This should not be controversial to anyone except Exxon or Chevron or BP.

3) One thing that pissed me off about Trump because of the irony is how he kept trying to paint Joe Biden as the wealthy billionaire with all the houses. Bitch, how many hotels and golf courses do you own? I thought that being a successful businessman was the major appeal of Trump? Why aren’t we now voting for Amtrak Joe because of his apparent business acumen? He apparently makes millions, doesn’t have any debt, and he pays his taxes.

5) Will someone please explain to President Trump that shouting “preexisting conditions” is not a healthcare plan. Protection for those with preexisting conditions does not happen in a vacuum. If the ACA is struck down, then health insurance will not be available to 20 million people, plus millions more who cannot afford insurance because of their preexisting conditions. Also, the individual mandate is what helped keep the cost of health insurance down, because by compelling younger people to buy into the ACA, premiums were cheaper for everyone. As we have seen with their COVID response, however, it is clear that Republican voters place their own interests ahead of the collective good.

6) I do not live in the Fox News echo chamber, but I follow all their conspiracy theory bullshit pretty goddamn closely, and I honestly had no idea on several occasions what Trump was saying or where it was coming from, particularly concerning that $3.5 million Biden received from a Russian mayor. What? There was also some stuff about China and Anthony Bobulinski, who Trump invited as his guest. I don’t know what any of it really means, but the Wall Street Journal — a conservative newspaper — had this to say about it:

The venture—set up in 2017 after Mr. Biden left the vice presidency and before his presidential campaign—never received proposed funds from the Chinese company or completed any deals, according to people familiar with the matter. Corporate records reviewed by The Wall Street Journal show no role for Joe Biden.

7) Fracking is bad. Seriously, just read about the environmental impacts of it here.

8) The problem with Trump when he is trying to sound restrained is that his tone no longer matches his rhetoric. He’s still saying crazy sh*t up there — something about how Democrats will tear all the buildings down and rebuild them with smaller windows — but he’s doing it with a calmer voice. It’s incredibly unnerving.

I wonder if Walter Reed has marriage counselors?pic.twitter.com/IP9MvEpFlX

10) So, we’re just not going to talk about the tweets of Aubrey O’Day, Don Jr.’s ex-girlfriend? Cool, cool, cool.

Omg. She used to date Don Jr. He supposedly wanted to marry her. pic.twitter.com/UeWWoOYPsC

This was my favorite tweet of the night, anyway.

This is unrelated to the debate, but y’all: The winter has not even started yet. It’s expected to get much worse than this.


← Open Thread: The Third and Final 2020 Presidential Debate | I Don't Like Armie Hammer →