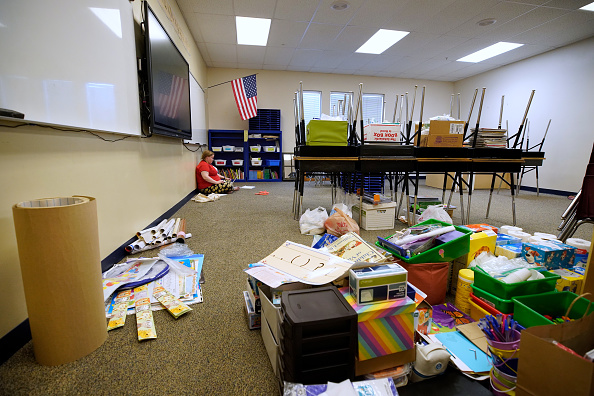 Students Returning to School Is Going Great! Why Do You Ask?

This is the lede in a piece from The Guardian today:

Coronavirus may be more easily transmitted in school and summer camp settings than previously understood, after the emergence of new details of outbreaks in the US state of Georgia and in Israel that have underscored the risks of school reopenings.

No shit? You don’t say! I don’t believe it! Because just four days ago, the Vice President and the Secretary of Education visited a fourth grade classroom in North Carolina without masks to illustrate how safe it is to return to school!


Mike Pence and Betsy DeVos visiting a North Carolina school with no masks on. pic.twitter.com/Rfs1U3BuTh


Students at school touted by Pence for reopening must quarantine due to COVID-19.https://t.co/MJoXZtNeTB


I’m sure it was a weird anomaly. Of course, schools are safe! Why would you ask?


"Taylor Coombs told CNN that six students and one staff member tested positive for the coronavirus. According to Coombs, 116 students that have been considered in "close contact" of a positive case have been sent home to quarantine for 14 days."https://t.co/ifX59mv7le


Remember that photo of a crowded hallway in a Georgia school we posted the other day? No, no one has tested positive there … yet. What’s that?

And multiple teachers at North Paulding say there are positive tests among school staff, including a staff member who came into contact with most teachers at the school while exhibiting symptoms last week. Teachers and staff said the school won’t confirm coronavirus infections among district employees, citing privacy reasons.

But the kid who took this photo? He was suspended.


A family member teaches at this high school in Georgia (North Paulding High) that's made the news. Teachers and students were told they could be suspended if they posted photos of the school in a bad light. The student who took this photo for the yearbook has been suspended. pic.twitter.com/plds4vZPNN


Oh, and the school nurse resigned (she actually resigned before the photo came out, but the photo validated her decision). Meanwhile, at least it’s going well in Florid … DAMNIT.


School employees at an elementary school in Manatee County, Florida quarantine after coworker tests positive for COVID-19 on first day of teacher training


Thankfully, at least Facebook and Twitter are getting better at cracking down on Covid-19 misinformation. Both suspended the Trump campaign’s twitter account yesterday for posting a video from Fox News where Trump said that students are “almost immune” from the Coronavirus. Although, clearly, Twitter got a little heavy handed with its suspensions.


This is absolutely nuts, @TwitterSupport. My account was locked for quoting and fact-checking Trump, and I was forced to delete this tweet. Why am I getting punished for shining a light on the president's falsehoods? pic.twitter.com/UtbsGBe3cd


In the meantime, we can all rest easily knowing that we are in good hands.


Trump says that after he aced the cognitive test, the questions about his "brain power" all "disappeared," "literally disappeared."


I don’t know what’s going to happen in the rest of the country where schools are concerned. What I do know is that, in Chicago, a hybrid model was announced, and within a few hours, the teacher’s union got involved and everything magically changed! Chicago will begin the year with remote learning. My guess is that we’re going to see that in more and more places, especially where the teacher’s unions are strong, and especially in cities, where government officials hopefully have more respect for their teachers. It’s going to be another long five or six months of remote learning, at least. I have no idea how any of us parents are going to get through it, but on the other hand, it’s better than sending our kids back to school, where it is clear that the virus spreads easily.