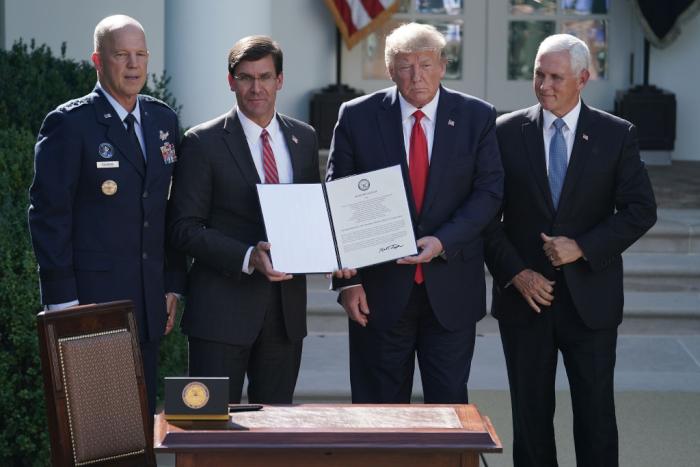 So, What's Really Going On with All these Firings at the Department of Defense?

A longtime reader, Brandon P., emailed early this morning and — because I’m “the closest thing to a journalist [he has] semi access to” — asked if I could address the scary situation in the Pentagon, where Donald Trump has basically fired the entire leadership (beginning with the Defense Secretary, Mark Esper) and replaced them with Trump loyalists.

What is going on?

I know what it looks like — and what a lot of Democrats fear — but it’s not the seeds of a military coup. You don’t orchestrate a military coup by firing the leadership — doing so has raised the ire of the rank and file in the military a number of times over the course of Trump’s administration — and you certainly don’t rely on people you have referred to as “losers” and “suckers” to overthrow the Constitution and install you as its leader, especially while trying to get thousands of military ballots tossed. As WashPo writes:

It remains highly unlikely that officers would go along with an overt attempt to prevent President-elect Joe Biden from assuming power in January. The U.S. military is not filled with Trump loyalists — and troops are more diverse in their political leanings than often thought. In written responses to questions from House lawmakers released over the summer, the chairman of the Joint Chiefs of Staff emphasized “in the event of a dispute over some aspect of the elections, by law, U.S. courts and the U.S. Congress are required to resolve any disputes, not the U.S. military.”

Also, and don’t quote me on this, but if you attempt to orchestrate a military coup and you lose, aren’t you, like, sentenced to death for treason or at least imprisoned? That means essentially sacrificing your life for the remote possibility that such a coup might be successful. Does anyone see Donald Trump trying to pull that off? Donald Trump is not a brave person.

What’s more likely, er, actually, what’s certainly at play here is that Donald Trump is doing what Donald Trump does, which is settling scores. It’s what he’s done since the beginning with James Comey, with Jeff Sessions, and many, many more. After the Senate failed to convict Trump in the impeachment proceedings against him, who did he fire? The people who testified against him, people like Michael Atkinson,
Alexander Vindman, and Joseph Maguire. This is what Trump does. He fires people, and he settles scores.

The same thing is happening at the Pentagon. Secretary of Defense Mark Esper didn’t want to use the troops to control the protests over the summer, and Trump couldn’t fire him then because it might have hurt his reelection chances. Now that he’s lost, Trump can fire all those people he’s been wanting to fire. From The Times:

“President Trump’s decision to fire Secretary Esper out of spite is not just childish, it’s also reckless,” said Representative Adam Smith, Democrat of Washington and the chairman of the House Armed Services Committee. “It has long been clear that President Trump cares about loyalty above all else, often at the expense of competence, and during a period of presidential transition, competence in government is of the utmost importance.”

Trump wants to fire the heads of the CIA and FBI, as well (Gina Haspel and Christopher Wray, respectively), because Haspel refused to declassify Russian documents that Trump wanted to be declassified (also part of the reason he fired Esper), and Wray insisted that white supremacists were a terrorist threat instead of ANTIFA, like Trump wanted him to say. Today, he’s also set to fire the top U.S. cybersecurity official Christopher Krebs.

Chris Krebs expects to be fired soon, @Bing_Chris reports. Krebs has been one of the top and most visible election security officials and has aggressively debunked misinformation in the aftermath. Widely respected for his work this year. https://t.co/F9wgFKXHdP

updated: "In particular, one person said, the White House was angry about a CISA post rejecting a conspiracy theory that falsely claims an intelligence agency supercomputer and program, purportedly named Hammer and Scorecard, could have flipped votes" https://t.co/QxKysnJoZb

Trump would fire Dr. Fauci, too, in a heartbeat if he could, but Fauci is protected by layers of bureaucracy that would take too much effort for Trump to cut through because Trump is lazy, which is — again — why he’s not a threat to lead a military coup. I mean, can you imagine?

So, tl;dr: If there is going to be a coup, it will not be a military coup, it will be through the courts. Since that is next-to-impossible, the likelihood of an actual coup is basically nil.