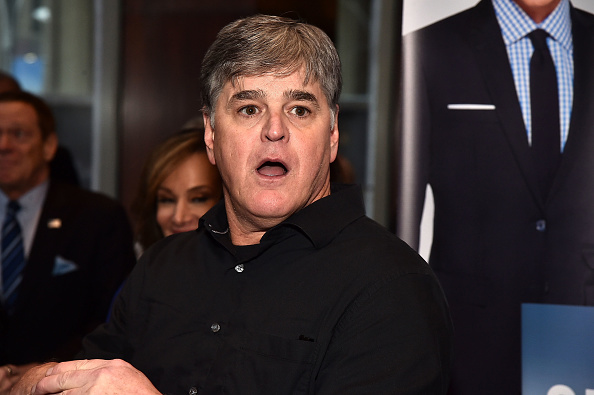 During the DNC last night, Donald Trump called into Sean Hannity’s show, as he so often does, to air his grievances. The “news” that Trump made during last nights’ edition was that he’d be sending law enforcement, the military, and U.S. attorneys to the polls in November, although you can bet your ass that he only means to “polls in Democratic areas in swing states.”

President Trump said to Fox host Sean Hannity that he plans to use law enforcement to monitor polls during the election to prevent fraud. pic.twitter.com/GIqfOWgUyg

There will obviously be legal challenges. It’s going to be an absolute shitshow. That’s not the point of this post, however. The point of this post is Sean Hannity privately believes Donald Trump is a “crazy” person, and that his fealty is to the business model that allows him to have a studio in his own basement from which to tape his show every night. Sean Hannity is a fraud, which is not a surprise, but he’s a fraud that doesn’t believe a word he’s saying.

Brian Stelter, who is a media pundit, has written a book about Fox News, how it distorts the truth, and how many in the rank-and-file at the network are embarrassed by what they have become. In a excerpt released to Vanity Fair this week, Stelter also speaks to a few anonymous sources who know what Sean Hannity really thinks of the President:

Hannity chose this life, so no one felt sorry for him, but the stress took its toll. “Hannity would tell you, off-off-off the record, that Trump is a batshit crazy person,” one of his associates said. Another friend concurred: “Hannity has said to me more than once, ‘he’s crazy.’”

But Hannity’s commitment to GOP priorities and to his own business model meant he could never say any of this publicly. If one of his friends went on the record quoting Hannity questioning Trump’s mental fitness, that would be the end of the friendship.

Early on in the Trump age, Hannity gained weight and vaped incessantly, which some members of his inner circle blamed on Trump-related stress. “If you were hearing what I’m hearing, you’d be vaping too,” Hannity told a colleague.

Needless to say, that’s not how Hannity’s calls with Trump actually went. They were instead a stream of grievance and gossip. Trump was a run-on sentence, so prone to rambling that “I barely get a word in,” Hannity told one of his allies.

Sean Hannity — who publicly dismissed the coronavirus, even as his network put every precaution in place — has gotten people killed. Sean Hannity has caused a lot of grief for a lot of people (not least of which are Seth Rich’s family). Sean Hannity has violated nearly everything ethical rule in the journalist handbook. He doesn’t do so out of a sense of patriotism. He doesn’t do so out of a sense of duty, or even because of his honest beliefs. He does it for the money. Sean Hannity is a disingenuous tent-revival preacher with the biggest audience in cable news, a goddamn modern-day Jimmy Swaggart.

← Joe Biden Is Not the Ideal Candidate, But He May Be The Right One for Now | 'RuPaul's Drag Race' Queens Mourn The Passing Of Chi Chi DeVayne →