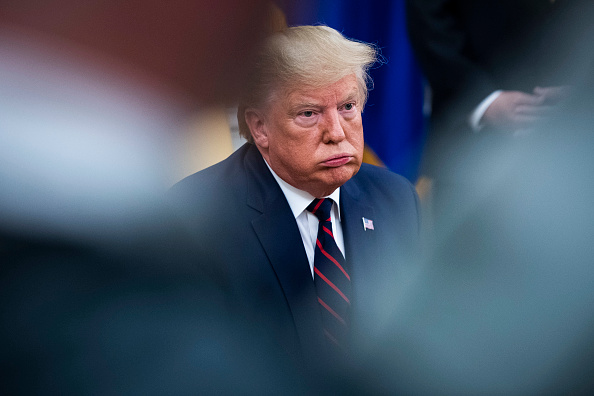 Trumpdates: Trump Being Booed Is Our New Religion

9:20 p.m. — Donald Trump took in a World Series game tonight in D.C. He was not received well.

President Donald Trump was just introduced at Nationals Park during Game 5 of the World Series.

Chat at Nats Park is now "Lock Him Up."

President Trump was booed loudly by the fans at Nats Park when he was shown on the big screen.
Then came a loud chant: “Lock him up.” @wusa9 pic.twitter.com/LBbgSAHd6k

I'm not a "Let that sink in" guy, but…Trump woke up this morning thinking that today was going to be the best day of his Presidency, and it ended with him being booed, live, by more people than have booed him on any day of his life.

Sunday, 11 a.m. — U.S. Special forces killed ISIS leader Abu Bakr al-Baghdadi yesterday, which is undoubtedly good news. Trump, however, is being tacky about it, per usual, by trying to downplay the killing of Osama Bin Laden to make this look like a bigger victory.

He also added this, falsely suggesting that he predicted Osama in 2000.

And again, while it is undoubtedly good news that al-Baghdadi is dead, there’s no call for this language, which may provoke and inflame ISIS members, perhaps even some of those who escaped from Syria during the Turkish invasion.

The president made a point of repeatedly portraying Mr. al-Baghdadi as “sick and depraved” and him and his followers as “losers” and “frightened puppies,” using inflammatory, boastful language unlike the more solemn approaches by other presidents in such moments. “He died like a dog,” Mr. Trump said. “He died like a coward.”

Just let the news speak for itself.

This was the entirety of President Obama’s account of how the bin Laden raid unfolded in his May 2 2011 announcement. Took no questions. https://t.co/GOGPiB1b78 pic.twitter.com/KTQSronUvK

9:37 p.m. — A political appointee — and the guy most caught up in this mess — apparently told House investigators last week that it was a quid pro quo.

Breaking via WSJ: Gordon Sondland told House committees last week that efforts by Trump and his allies to press Kyiv to open investigations in exchange for a White House meeting with Ukraine's president amounted to a quid pro quo, his lawyer said. https://t.co/XyHdB7baM0

No word on whether this was a direct response to the above, of if it’s just the President calling attention to himself.

Something very big has just happened!

Saturday, 8:20 p.m. — Here’s a quick Saturday check-in on a stupid skirmish between former Chief of Staff John Kelly and Donald Trump. In an interview with The Washington Examiner, John Kelly says that he “feels bad that he left,” and that, “I said, whatever you do — and we were still in the process of trying to find someone to take my place — I said whatever you do, don’t hire a ‘yes man,’ someone who won’t tell you the truth — don’t do that. Because if you do, I believe you will be impeached.”

And the White House @PressSec Stephanie Grisham responded to former chief of staff John Kelly with a blistering comment. “I worked with John Kelly, and he was totally unequipped to handle the genius of our great President.”

Trump has responded, as well.

And Kelly’s comments earn a statement attributed to Trump:

“John Kelly never said that, he never said anything like that. If he would have said that I would have thrown him out of the office. He just wants to come back into the action like everybody else does.”

5:00 — You think Trump saw Obama’s funeral speech and decided to do the most meaningless spiteful thing he could think of?

HAVANA (AP) — US bans flights to all Cuban cities but Havana in latest move by Trump to roll back Obama-era easing of relations.

3:05 — He doesn’t say anything surprising or revelatory (though, he does repeat a lot of Biden conspiracy theories), but Giuliani — who is on the outs with the White House now — has been known to butt dial a reporter or two.

"Is Robert around?" Giuliani asks.

"He's in Turkey," the man responds.

Giuliani replies instantly. "The problem is we need some money."

The two men then go silent. Nine seconds pass. No word is spoken. Then Giuliani chimes in again.

"We need a few hundred thousand," he says. https://t.co/LMzUJ6PZnk

2:10 — I know you come here for updates on Trump, but let this be a salve for having to endure them all. Is Obama taking direct shots at Trump? Well …

The anonymous “senior Trump administration official” who will release a tell-all book, “A Warning,” next month was a frequent participant in meetings with President Trump and plans to recount specific conversations, sources tell me. “You will hear a great deal from Donald Trump directly, for there is no better witness to his character than his own words,” the author writes on the book’s back cover, seen for the first time in the graphic above.

The book comes out on November 19th, around the same time the Democrats plan to go public with their impeachment investigation. A double whammy of bad news coverage could further drive a wedge between Trump and the Republican Senate, depending upon what “Anonymous” has to say. I expect there will be plenty of scuttlebutt.

This — from the Rachel Maddow show last night — is exactly where we are in the impeachment process right now:

"Ask yourself why no facts favorable to the president have leaked from the Republican side. It's not because they don't leak. It's because there aren't any." -Rep. Sean Patrick Maloney pic.twitter.com/BDFWb9oVYc

There are no facts favorable to Donald Trump. There are 46 Republicans sitting in on these interviews. They have not leaked anything favorable to the President because there is nothing favorable to leak. The House, meanwhile, continues its investigation, interviewing witnesses and collecting evidence, as it prepares to open the impeachment inquiry up to the public in mid-November, as the Republicans have demanded. The Republicans are probably going to wish that they had not, because at the moment, they cannot argue the facts. They can only argue process, which is why we’ve seen the House Republicans storm secure rooms and Lindsey Graham put forward a meaningless symbolic motion to censure the House.

When the Democrats take away that process argument, the Republicans will be left trying to defend Trump on the merits, as career diplomat after career diplomat appears before the House — and on our television screens — to describe what happened. Trump, at the moment, is trying to smear career bureaucrats as either radical Democrats or Never Trumpers, which he refers to “human scum.” That’s going to be a lot more difficult to do when our televisions put a face to “human scum.”

Eventually, this is going to put Republicans in the Senate in an awkward position. We all know what they’ll do: They’ll find one small, meaningless inconsistency with one witness, or find texts between a diplomat and his or her lover and blow it way out of proportion in an effort to distract the public from the actual merits of the impeachment case. But how many times can they do that? At some point, the overwhelming evidence from an overwhelming number of non-partisan officials is going to overwhelm the Republicans in the Senate.

Those moderate Republican Senators facing re-election in 2020 in swing states? They’re already screwed, and they know it. From the Times:

It has tightened the squeeze they were already feeling between a political base that demands unquestioning loyalty to Mr. Trump, and the moderate swing voters who may very well decide their elections. And it is one reason that support for the president in the Republican-led Senate appears to be subtly softening, a phenomenon that some of his own advisers fear that Mr. Trump does not fully appreciate.

Those swing-state Senators, in addition to Senators who are not seeking re-election (or who do not face re-election until 2024) could theoretically form a block big enough to pull the trigger on convicting Trump. In doing so, they might not only save their own reputations, they’d ultimately save the rest of the Republican Senate, which does not like Trump but cannot risk going against him politically.

Even Senate Republicans who have publicly supported the President are being thrown under the bus for not doing enough, and that’s also rattled some Trump defenders in the Senate. From The Daily Beast:

Other aides said that they found the attacks from Trump-allied operatives to be counterproductive.

“It’s an interesting strategy,” a senior Senate GOP aide told The Daily Beast, “to attack Republican senators after they try to defend you.”

The friction between Senate Republicans and Trumpworld operatives could complicate an already extremely dicey situation for the White House as it tries to hold party members in line. Publicly, many GOP lawmakers in the Senate remain supportive of the president. But their declarations of support have become notably more cautious and few seemed willing to endorse the idea that they should be using their committees and offices to give Trump more cover.

Ultimately, this is all going to come down to the Republican Senate. And maybe they don’t vote to convict Trump, but maybe they do enough damage to themselves that the Republicans lose their majority in the Senate next year. If Democrats can take back the White House, we could be looking at a 2021 where a progressive candidate actually could come in and make sweeping reforms with the full back of the House and Senate.

That is assuming, of course, that we still have a Democracy left to protect.

A couple of quick other notes:

— Summer Zervos, the former The Apprentice contestant suing Trump for defaming her after she accused him of sexual assault, is mounting a good deal of evidence proving, at the very least, that both she and Trump were in the same place at the time that the “alleged” sexual assault took place.

— And on the foreign policy front? This is nuts:

So we are clear. This is nuts. We are abandoning our allies, abetting ethnic cleansing, allowing ISIS prisoners to be released, then we are going to protect oil fields hundreds of miles away? This is logistically crazy, strategically upside down, and morally bankrupt. https://t.co/rYrHjceFww


← 'SNL' Highlights: Chance the Rapper, Che's Transphobic Joke, Jason Momoa, and The Spooky Song | Box Office Report: 'Joker' Back On Top As It Becomes The Highest Grossing R-Rated Movie Ever →