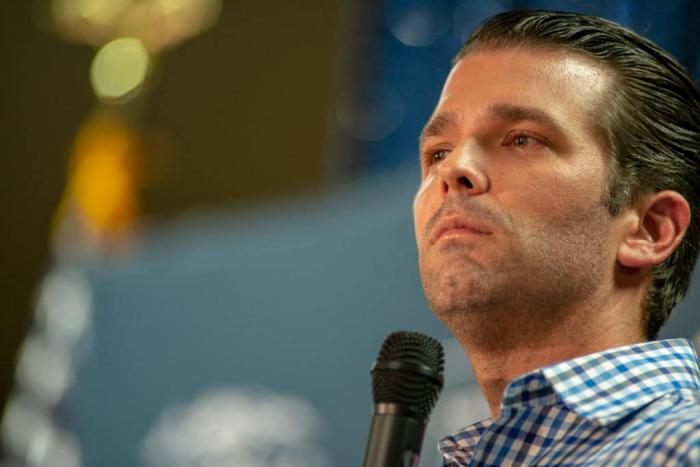 Donald Trump Jr. ‘wrote’ a highly original book called Triggered, probably because Dril is smart enough to have ‘I’m Not Owned’ trademarked. As The New York Times was quick enough to point out when the book debuted at number one on their bestseller list, he had a little help from his ‘friends’ in shifting copies off the shelves. The list includes a sword symbol near any book where evidence of bulk-buying tactics has been uncovered or is highly suspected and it should be a surprise to absolutely nobody that baby Donny was caught red-handed. Runs in the family, I suppose. It’s the only way his dad could shift copies of the doorstopper-in-waiting The Art of the Deal.

Now, there’s even more hard evidence in our corner as FEC disclosures show the Republican National Committee making a single payment of $94,800 to Books-A-Million a few days before the book was released. The purchase’s purpose was listed as being for ‘donor mementos’, another favorite tactic of right-wing talking-heads and politicians who want people to believe they know the letters of the alphabet and are able to join them together to form those things called words.

New FEC disclosures show a single large RNC payment of $94,800 to Books-a-Million in October, a few days before "Triggered" was released. An RNC spokesman confirmed that the expenditure was connected to their promotion of Don Trump Jr.'s book. pic.twitter.com/vsmmsgrYCp

What a f*cking numpty.

Donny, you hire people to do this sh*t for you! You can outsource this scam to people so that it at least looks like you have a vague awareness of business planning. That’s what our old pal Lani Sarem did. But nope, you had to get daddy’s goons to put the money down instead.

Meanwhile, Michelle Obama’s Becoming, listed by both Amazon and Barnes & Noble as the second biggest selling book of 2019, was just nominated for a Grammy for the audiobook. We celebrate literate legends who people actually like.

← The 'A Million Little Things' Fall Finale Is a Lot | Review: Tom Hanks' 'A Beautiful Day in the Neighborhood' Is So Much More Than A Mr. Rogers Movie →