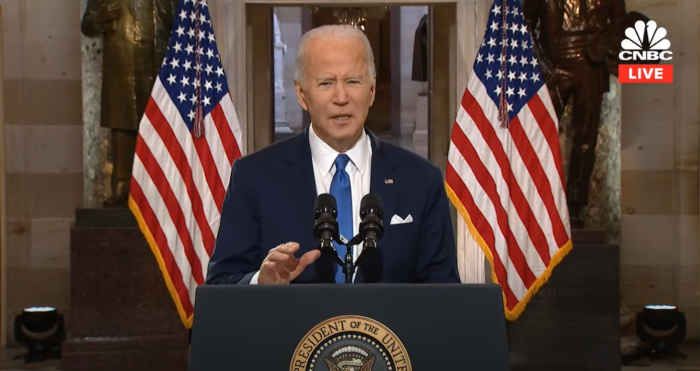 Pres. Biden Put the Blame for the January 6 Insurrection Where It Belongs

Joe Biden wasn’t many people’s first choice when it came to Democratic nominees for the Presidency. Politically, his nomination was the equivalent of everyone settling on Applebee’s for dinner. And while his presidential leadership is so far ahead of Trump’s it’s crossed the event horizon, it’s also left a lot to be desired. Republican and isolated Democratic intransigence is to blame for a lot of it, but not all. But today, on the anniversary of Trump’s attempted MAGA insurrection, President Biden came out swinging with a barn-burner of a speech that laid the blame squarely on Trump’s concave shoulders.

Held in the Statuary Hall of the U.S. Capitol, Biden’s speech took direct aim at Trump, his lackeys, and the armed mob of traitors who hunted Democratic lawmakers through the Capitol and threatened to hang the Vice-President. The speech is worth watching.

Or, if you’re like me and prefer the written word, you can read it in its entirety here. Some key sections:

- Close your eyes. Go back to that day. What do you see? Rioters rampaging. Waving, for the first time inside this Capitol, the Confederate flag that symbolizes the cause to destroy America. To rip us apart.

- My fellow Americans, in life there’s truth and tragically there are lies. Lies conceived and spread for profit and power. We must be absolutely clear about what is true and what is a lie. And here’s the truth: The former president of the United States of America has created and spread a web of lies about the 2020 election.

He’s done so because he values power over principle, because he sees his own interest as more important than his country’s interest, than America’s interest. And because his bruised ego matters more to him than our democracy or our Constitution.

- Right now, in state after state, new laws are being written not to protect the vote, but to deny it. Not only to suppress the vote, but to subvert it. Not to strengthen and protect our democracy, but because the former president lost instead of looking at the election results in 2020, and saying they need new ideas or better ideas to win more votes. The former president and his supporters have decided the only way for them to win is to suppress your vote and subvert our elections. It’s wrong. It’s undemocratic. And frankly, it’s un-American.

The President is, of course, absolutely right. No amount of subterfuge and obfuscation by Republican Congressional members or Fox News hosts can change that. We saw them scale the walls, smash windows, and beat police officers. Every American knows it. Of course, more than a few refuse even now to acknowledge it.

What brazen politicization of January 6 by President Biden.

I wonder if the Taliban who now rule Afghanistan with al-Qaeda elements present, contrary to President Biden’s beliefs, are allowing this speech to be carried?

Never mind that Graham previously pretended outrage over the riot, right up until Trump told him to heel. Never mind it’s impossible to politicize a political insurrection any further than it already is. You know things are bad when Dick Cheney is a voice of reason. An unpleasant, corrupt voice of reason, but even so. What current Republicans have done to the party can never be undone, and I think even Cheney knows it. The entire GOP platform has distilled over the past decade into a hostile, xenophobic, anti-intellectual, populist movement more akin to Pol Pot’s Khmer Rouge than anything Teddy Roosevelt would recognize as Republican.

As expected, Trump pitched a fit over President Biden’s speech. Short on facts and long on personal gripes, it’s the same self-obsessed nonsense as we’ve heard for years now, designed to inflame the simple-minded without offering proof. Just as Maricopa County election officials on Wednesday debunked every claim of election fraud made by the “Cyber Ninjas,” this fight’s never been about the truth. Rather, it’s about the selfishness inherent in the Republican party. Look no further than J.D. Vance, as Dustin pointed out earlier, whose “last straw” was the poor reviews of his terrible movie. If true, it means Vance went full-blown populist nut out of spite, despite his Ivy League education. There’s no better summation of the Republican platform than a wealthy white man sticking it to the poors for some imagined slight. Biden’s speech made that point repeatedly, and I appreciate it was said so clearly. There can be no common ground with traitors.


← 'Abbott Elementary' Might Be Your New Favorite Workplace Comedy | In Theory, 'Book of Boba Fett' Fleshes out Its Protagonist →