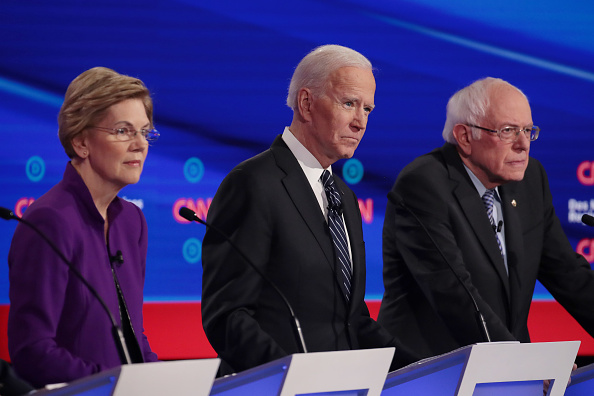 No One Knows What's Going to Happen on Super Tuesday, Especially the People Who Insists They Do

Briefly putting aside everything else that’s going on in the world — coronavirus, the trash fire we have in the Oval Office, the polarization of America and the world — tomorrow will be a fascinating day in politics. No one really knows what’s going to happen tomorrow, and do not let any pundit tell you otherwise. The polling at this point is bullsh*t. Conventional wisdom is bullsh*t. Electability concerns are bullsh*t. Ezra Klein’s models do not know. Nate Silver has no clue. That guy who really, really thinks he knows exactly what’s going to happen tomorrow? He’s full of sh*t, too.

Up until Saturday, it looked like Bernie Sanders might run away with it by virtue of the moderate wing of the party splitting votes, allowing Bernie to easily amass at least a plurality of delegates. Now? Percentage-wise, no candidate winning a majority of delegates is actually the most likely outcome. But it’s usually that way around this time election season, so don’t pay it no mind. Do you guys remember how close it was in 2008? Obama won the popular vote among Democrats by 60,000 votes. Out of 34 million. It was 51-49 among pledged delegates. If John Edwards had stayed in the race after losing the South Carolina primary, both Obama and Hillary would have had a difficult time gaining a majority of delegates. But he dropped out after South Carolina.

This Super Tuesday is unusual in that — notwithstanding the departure of Pete Buttigieg — we haven’t really had a Super Tuesday where the field has not been all but narrowed down to two candidates since 1992. Even in ‘92, Clinton basically came out of the Super Tuesday having beaten the likes of Bob Kerry, Paul Tsongas, and Jerry Brown badly enough that he’d all but be assured the nomination.

I think that tomorrow is mostly a two-person race, though that is complicated by the fact that most of us who support Elizabeth Warren are going to vote for her regardless, instead of weighing in on the Bernie/Biden matchup. It’s also complicated by Bloomberg, which is ironic because — at this point — he is the second biggest obstacle to Biden’s nomination (behind Bernie), and Bloomberg got into the race because he believed that Biden wasn’t a strong enough candidate. Bloomberg is gonna get his ass kicked tomorrow, but will he get it bad enough that he won’t factor into the delegate count? Or is he going to take one-third of the moderate vote away from Biden? Is Bloomberg’s pride hurting his own interests? (Yes, yes it is.)

All of this is also complicated by the fact that voters are not as easily divided by policy preferences as we might think. One would imagine that all of Buttigieg’s voters would jump to the other moderate, Biden, but polls show that Bernie is the second choice for Pete voters (all due respect to the Pete constituency but WTF? You just like shiny things? How is your first choice the guy trying to keep the system intact, and your second choice the guy who wants to blow it up?)

All of which is to say: If someone tells you they know what is going to happen tomorrow, tell them to shut the f**k up. They have no idea. We are in unprecedented territory with a popular but very problematic former Vice President running against a billionaire former Republican, a 78-year-old Socialist Jew beloved by the youths, and another former Republican turned wonky progressive. It’s exciting, although I just keep thinking that the collective light bulb is gonna go off in the minds of America and they’re all gonna think, “Why are we fighting over all these old white men when Elizabeth Warren is staring us right in the face?”

And if that doesn’t happen? It’s gonna be a long night, and potentially a very long campaign.