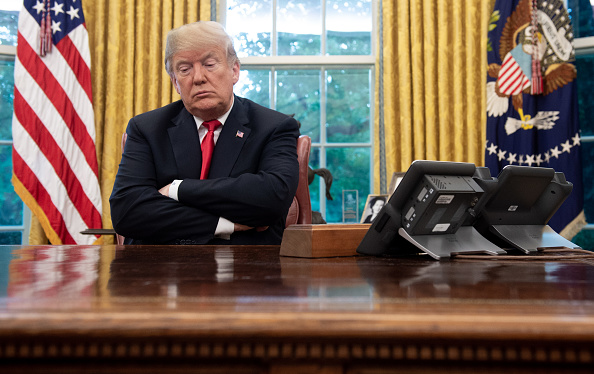 Another Cabinet Secretary Expected to Resign Amid Impeachment Inquiry: The Latest on the Impeachment of President Donald Trump

09:00: Who took over Chuck Todd’s body? That’s the real conspiracy.

Here’s the clip in all its glory. pic.twitter.com/KRJ405yzpQ

8:40: A few more updates this evening, beginning with the anticipated departure of Energy Secretary Rick Perry, who is expected to leave by the end of November after his travels to Ukraine recently got him embroiled in the impeachment investigation. So long, buddy! Maybe you can finally take off the glasses again and be your natural doofus-looking self!

Meanwhile, the New York Times has learned that three diplomats, including Kurt D. Volker, drafted a statement for the President of Ukraine, Zelensky, that would have committed him to investigate the Bidens.

The statement was written with the awareness of a top aide to the Ukrainian president, as well as Rudolph W. Giuliani, Mr. Trump’s personal lawyer and the de facto leader of a shadow campaign to push the Ukrainians to press ahead with investigations, according to one of the people briefed on it.

The statement would have committed Ukraine to investigating the energy company Burisma, which had employed Hunter Biden, the younger son of former Vice President Joseph R. Biden Jr. And it would have called for the Ukrainian government to look into what Mr. Trump and his allies believe was interference by Ukrainians in the 2016 election in the United States to benefit Hillary Clinton.

All of that, of course, tracks exactly what Donald Trump asked for in his phone call with Zelensky.

5:00: The new revelations don’t carry as much weight now that THE PRESIDENT PUBLICLY COMMITTED CRIMES, but for what it is worth, Kurt Volker — the former U.S. special envoy for Ukraine — repeatedly told Giuliani that the claims against Joe Biden were not credible.

Volker also said that he and other State Department officials cautioned the Ukrainians to steer clear of U.S. politics. Getting involved, he said he told them, would open the nation up to allegations that they were interfering in an election and could be detrimental to Ukraine long-term, according to these two individuals.

Moreover, on the quid pro quo front, from ABC News:

In newly disclosed text messages shared with Congress, the top U.S. diplomat to Ukraine at the time writes to a group of other American diplomats that “I think it’s crazy to withhold security assistance for help with a political campaign.”

Finally, that other whistleblower complaint, from an IRS official accusing the President and Vice President of interfering with audits of their taxes, is surfacing now.

Rudy Giuliani said that he personally gave Mike Pompeo a file of documents with unproven allegations against Biden and was told that the State Department would take up an investigation of those claims.https://t.co/QqSl7zvsKQ

Trump says "the country will go to hell" if he loses next year pic.twitter.com/UoHxJl4liN

If you’re wondering if things are gonna get any weirder, OG Buffy just walked in the room.

Hey @Nickelback this is such a bunch of bull that you would disable the media on this. I bought your song on iTunes 9 hours ago because I loved @realDonaldTrump’s tweet so much & I’ve also always been a fan of you guys. Now I want to return the song & get my nickels back!! https://t.co/IG9PgJ1WNV

I don’t know if this is actually notable or not. But someone says it is.

Notable this was published by Fox and is the top link today in red on the Drudge Report https://t.co/fZiwvdINyJ

Meanwhile, this is the approach that Pence is going to take. Not denial. Not misdirection. His defense is apparently, “What Trump did was perfectly acceptable.”

This is an important point.

One of the main reasons this is so jarring is that the criminal law is hard-wired to look for evasion and concealment—the system isn’t equipped for open defiance. https://t.co/0wjvHcpreI

Again, Trump committing impeachable offenses publicly, in a weird way, takes some of the wind out of the Democrats’ sails. It’s like in a murder trial, where the prosecution prepares three weeks of damning testimony and evidence proving that the defendant stabbed the victim to death, but the defense stipulates to those facts. It changes the conversation from “did he or didn’t he do it?” to “Was he justified in doing so?” Pence, above, thinks that he is, and expect Republicans to jump on this approach. “Yes the President asked foreign leaders to investigate a political opponent,” they will argue, “but he was perfectly in his right to do so.”

Trump is not perfectly in the right to do so, but now it’s up to Democrats (and hopefully the media) to prove it over a chorus of Republicans shouting that Biden is the real criminal here (although, there is no evidence of wrongdoing on either Joe or Hunter Biden’s part). It’s difficult to debate an opponent who makes up facts and is constantly moving the goalposts.

Within an hour of President Donald Trump declaring on the White House lawn Thursday that the Chinese and Ukrainian governments should investigate both Joe and Hunter Biden, House Minority Leader Kevin McCarthy urged Speaker Nancy Pelosi to suspend the Democrats’ impeachment inquiry in a letter Thursday.

11:09: This is Rick Wilson, the former campaign manager for John McCain:

“In private, Republicans are in the deepest despair of the Trump era. They’ve got that hang-dog, dick-in-the-dirt fatalism of men destined to die in a meaningless battle in a pointless war. They’ve abandoned all pretense of recapturing the House, their political fortunes in the states are crashing and burning, and the stock-market bubble they kept up as a shield against the downsides of Trump—‘but muh 401(k)!’—is popping.”

10:48: Trump is all in now. Now he’s asking China to investigate the Bidens. It’s almost like he doesn’t understand why he’s being impeached in the first place.

Wow. Here's Trump making a veiled threat that China should start investigating the Bidens because "I'm sure President XI does not like being under that kind of scrutiny … they call that a payoff." pic.twitter.com/WhJN4gn1yW

Trump encouraged foreign election interference on his behalf from two countries in the course of one 7-minute media availability.

This is an impeachable offense. https://t.co/lRStZH7aVG

At a minimum, Trump’s performance this morning is just hilariously bad politics. They had settled on calling Schiff corrupt and a liar. It seemed to be getting some traction. Then he goes about and kills that messaging by calling on foreign leaders to investigate Biden again.

Republicans doing all this work to falsely accuse Schiff of fabricating conduct the president has admitted to, only for the president to commit the impeachable offense again on camera.

By a 52-21 margin, Americans think asking Ukraine to investigate Biden is an abuse of power, per USAToday poll.

can’t be impeached over a whistleblower if you just openly do the shit he blew the whistle on pic.twitter.com/YXUHWAKjR9

Asked what he wanted President Zelensky to do about the Bidens, “If they were honest about it, they would start a major investigation into the Bidens.” pic.twitter.com/CZ0ikrtEdp

One of the most bizarre moments in a bizarre day in politics yesterday came when Donald Trump tweeted a video detailing a conspiracy theory about Hunter and Joe Biden that contained a Nickelback song. Nickelback immediately began trending on Twitter. It was a brief moment of joy in a chaotic day.

Meanwhile, again, when you are the paper of record, you have to be careful how you word your headlines. This headline launched a thousand Republican conspiracy theories yesterday, brought Megyn Kelly out of the woodwork, and gave the Trump administration some ammunition, even though the article itself contains very good reporting about a whistelblower process that was vigilantly on the up-and-up, not that Republicans read the article itself.

Breaking News: The whistle-blower gave an early account of allegations against President Trump to a House aide who outlined it to Rep. Adam Schiff, who is now leading the impeachment inquiry https://t.co/9PxtBDXQYp

And yet, we’re gonna hear sh*t like this from the likes of Devin Nunes for weeks.

My statement on the latest fiasco https://t.co/B2lNf6Bb60

And it continues this morning.

This, young journalists, is an excellent example of normalizing. “Stormy mood” doesn’t come close to capturing in the batshit crazy presser that the President held. Words matter, and while I’m not sure why the @nytimes frequently struggles to get things right—aim to do better. https://t.co/EQQVIbLocy

No one is asking the NYTimes to report with a liberal slant, we’re just asking them to characterize the situation correctly. “Stormy”? This is not “stormy.” This is “unhinged,” which is a charitable characterization of Trump’s behavior yesterday.

President Trump lashed out at @Reuters reporter @jeffmason1, who asked him what he wanted Ukrainian President Volodymyr Zelenskiy to do when Trump brought up the business ties to Ukraine of Hunter Biden, son of Joe Biden https://t.co/3aiSLeOfBL pic.twitter.com/AQF3dpkChs

Note that Mike Pence is up to his eyeballs in this scandal, too. And some people are saying that, if Trump is impeached, he wants to take Pence down with him, because a President Pelosi better suits Trump’s victim narrative. On the other hand, Pelosi won’t pardon Trump of any crimes, while Pence likely would.

Pence is distancing himself from Trump on Ukraine. Rush is turning on Fox News. Rudy is throwing the State Department under the bus. And Trump is lashing out in all directions at once. This kind of thing happens when a scandal begins to consume a presidency. It'll get worse.

Kellyanne’s husband, George Conway, went deep this morning, writing 11,000 words (or half a Lord Castleton article) on how Trump’s mental instability makes him unfit for office. It’s a good piece, but the kicker is that Conway believes that psychologists and psychiatrists should testify as experts at Trump’s impeachment hearing.

Congress should make extensive use of experts—psychologists and psychiatrists. Is Trump so narcissistic that he can’t help but use his office for his own personal ends? Is he so sociopathic that he can’t be trusted to follow, let alone faithfully execute, the law?

Finally — for the moment — I leave you with another poll, which shows more people want Trump impeached — and removed from office — than not.

Americans by a 45%-38% plurality now support a vote by the House to impeach Trump, a USA TODAY/Ipsos Poll finds.

By a similar margin, 44%-35%, those surveyed say the Senate should convict Trump and remove him from office.

Note, too, that Kurt Volker — the special U.S. envoy to Ukraine — is expected to meet privately with the House Intelligence Committee today.