#MoscowMitchMcConnell, And Also How the Left Is Just as Easily Tricked by Fake News

If you are waking up this morning and checking Twitter, you’ll see three variations of #MoscowMitchMcConnell trending. Before we get to that, you’ll also note that “Obama and Biden” are trending. 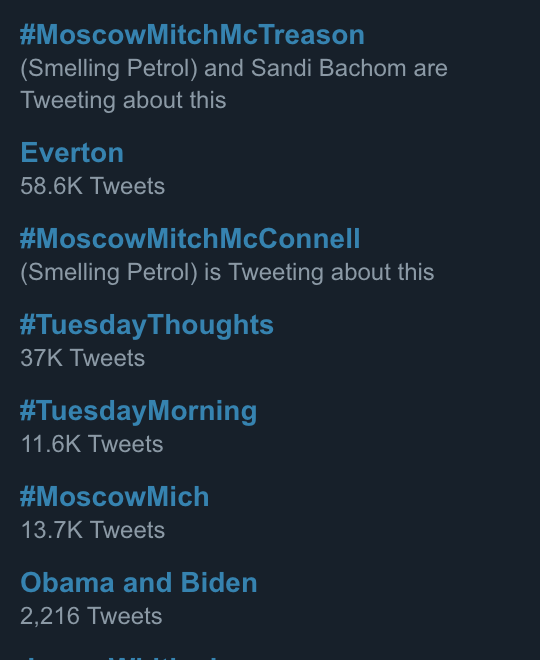 “Obama and Biden” are trending because of this tweet:

GOP rallies around Trump 9/11 role. “While Obama and Biden were cowering in fear on Air Force 1, Mr. Trump was on the ground with first responders searching for survivors and pulling people to safety,” Jim Jordan says. “I remember seeing him on TV, running toward the danger.” pic.twitter.com/P7ol4wycoF

Now @LindseyGrahamSC says the president was being modest about his role in 9/11. “I think most people know the truth which is that Mr Trump was in fact a first responder on 9/11,” Graham says. “He’s a hero.” pic.twitter.com/DbrlGESSLK

On @FoxNews tonight @DevinNunes calls for investigation into alleged @FBI coverup of “Mr. Trump’s significant contribution as a first responder after the devastating 9/11 attack,@. Who at the FBI destroyed the video evidence, and under whose orders?” pic.twitter.com/u7q6LiJdf3

I’m not sure what that says about America right now. I mean, it’s not like Trump and his people haven’t made statements that are just as ridiculous — Trump just yesterday bragged about being “down there” after the 9/11 attacks, a statement we all know is untrue.

And it’s not like Trump supporters and other Republicans haven’t blamed Obama for other things that preceded him in office (Ted Cruz, for instance, once blamed Obama for the Wall Street Crash).

Glancing back over on Twitter, “Jim Jordan” is now trending, as well, and all because of a made-up quote by a comedian that a whole lot of people readily believed:

How quickly Jim Jordan, the GOP, & Cult 45 forget who was Pres. & VP during the 9/11 attacks. They clearly forgot the vid of Bush sitting in a class & someone whispering in his ear—& the look of "Oh shit, we're fucked!" terror that crossed his face. That wasn't Obama and Biden!

I dont think its funny WHEN OBAMA WASNT PRESIDENT DURING 9/11
Both Obama And Biden were in the Senate.
And
TRUMP NEVER HELPED ON 9/11
JIM JORDAN WILL LIE ABOUT ANYTHING FOR TRUMP. Where was Jordan on 9/11? Why was he against funding?#StolenValor #TrumpTreason https://t.co/qDkgAsnTH6

@Jim_Jordan You’re one seriously twisted fuck. Do you really believe Obama and Biden were in office on 9/11? Or do you just think Ohioans will believe you? Do you think anyone believes Donald Trump ran toward danger that day?!? You’re a liar, Gym, and we all know it.

I know it’s fun to own the Republicans, but no one is owning anyone when you’re doing it by attributing a satirical, fabricated quote to him. You just kind of look silly for not looking up the source of the quote.

Anyway, the #MoscowMitchMcConnell hashtag is trending for an actual reason: Mitch McConnell, who has consistently blocked election security bills in the Senate put up by Democrats, got hot under the collar yesterday because people keep calling him #MoscowMitch (a nickname that MSNBC’s Joe Scarborough apparently coined, which makes it Joe Scarborough’s only positive contribution to society). McConnell went off on the Senate floor:

“I was called unpatriotic, un-American and essentially treasonous by a couple of left-wing pundits on the basis of bold-faced lies. I was accused of aiding and abetting the very man I’ve singled out as an adversary and opposed for nearly 20 years, Vladimir Putin. These pundits are lying, lying when they dismiss the work that has been done. They’re lying when they insist I have personally blocked actions which, in fact, I have championed and the Senate has passed. They are lying when they suggest that either party is against defending our democracy.”

“I’m not going to let Democrats and their water carriers in the media use Russia’s attack on our democracy as a Trojan horse for partisan wish list items that would not actually make our elections any safer.” “I’m not going to do that.”

Modern-day McCarthyism is poison for American democracy. It is shameful to imply that policy disagreements make the other side unpatriotic. The people who push such unhinged smears are doing Putin’s destabilizing work for him.

I should note that the legislation that McConnell would not put on the floor — but that had passed the House — was a mere $600 million bill that called for updating voting equipment to require paper ballots and ensure that they remain disconnected from the Internet. Seems pretty basic, but McConnell won’t even put the bill up for debate.

Who is he protecting?

Haha #MoscowMitchMcConnell has single handedly put a halt to each attempt to protect this country from proven, unarguable and constant election meddling by RUSSIA. Fucking WHAT? Oh shit that’s so fucked up! Haha LOL #MoscowMitch you are crazy!