On Saturday, which was *checkes notes* four days ago, a man shot and killed 22 people in El Paso and wounded dozens more because, as he wrote in his manifesto, there was a “Hispanic invasion in Texas,” that America was being separated into races, and that he feared that white people were being replaced, all three of which are primetime talking points on Fox News. Literally. In fact, yesterday Brian Kilmeade on Fox & Friends reiterated that America was being “invaded” by migrants. FBI Director Christopher Wray — who was appointed by Trump — said just two weeks ago that most domestic terrorist arrests this year have involved white nationalism.

According to the Anti-Defamation League, white supremacist propaganda distribution tripled from 2017 to 2018. Hate crimes are on the rise, and nearly 60 percent of those hate crimes are perpetrated because of the victim’s race and 22 percent because of the victim’s religion. Seventy-three percent of extremist-related murders in the last decade were committed by right-wing extremists. In 2017, hundreds of white nationalists rallied in Charlottesville chanting, among other things, “Jews will not replace us.”

But you guys: White supremacy is a “hoax,” according to Tucker Carlson.

.@donlemon just played the video of Tucker Carlson claiming white supremacy is "not a real problem" in America and "a hoax" and asked "is that not the dumbest thing you've ever heard"? pic.twitter.com/Uu67TdmIh7

On MSNBC, @GoAngelo explaining the similarities between the El Paso shooter's manifesto and racist, bigoted rhetoric from people like Tucker Carlson.

On Fox News, Tucker Carlson arguing that white supremacy is a "hoax" used to "divide" us. pic.twitter.com/VLGgGpi9zV

Again, if you folks want to boycott what’s left of Tucker Carlson’s advertisers, that’s great. But what we really need to do is boycott Spectrum and Comcast and other cable providers until they drop Fox News from their channel lineups, because right now, cable providers are giving millions of Americans access to white supremacy propaganda. If you were thinking about cutting the cord, now is a good time. The upside to the coming streaming wars, by the way, is that Fox News is not owned by Disney or Apple or Universal or Netflix or Amazon. We can get rid of it.

— Meanwhile, MAGA trolls and Russian bots are pushing the #ImpeachJoaquinCastro hashtag this morning because Joaquin — the twin brother of Presidential candidate, Julian — published the names of Trump’s top donors in San Antonio. Note: All of this information is publicly available. You know how I know this? Because Kate is always looking up to see which politician a certain celebrity is supporting. Bradley Whitford, for instance, has donated to Warren, Mayor Pete, Julian Castro, Cory Booker, and Ilhan Omar this year. Robert Downey, Jr. hasn’t given any money this year, but he did donate the max to Barack Obama in 2012. It’s fun to look up celebrities there.

Anyway, there’s nothing illegal about what Joaquin Castro is doing, and if you’re not proud of the candidate to whom you give money, don’t donate to that candidate. It’s pretty simple.

— I love this Beto. Keep it up. Dude’s hit his stride.

22 people in my hometown are dead after an act of terror inspired by your racism. El Paso will not be quiet and neither will I. https://t.co/dakFPKj0vJ

I’ve been following Beto O’Rourke through his community as it mourns this week — and person after person has thanked him for being their voice, for sticking up for their community, for confronting the president. None of his neighbors are telling him to be quiet. https://t.co/MyoO5XfNA7

— Shut up, Ivanka. How do you even fit a dog whistle that big into your mouth?

As we grieve over the evil mass shootings in El Paso and Dayton, let us not overlook that Chicago experienced its deadliest weekend of the year. 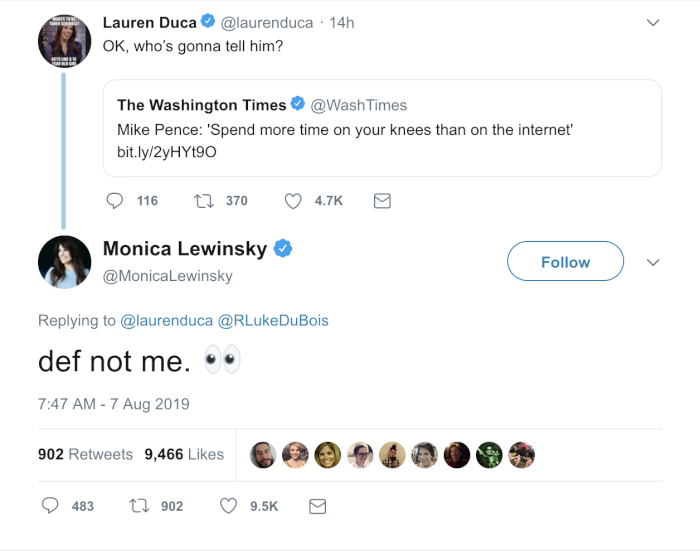 — Finally, Toni Morrison passed away yesterday, and this video has been making the rounds. It’s worth three minutes of your time, I promise.