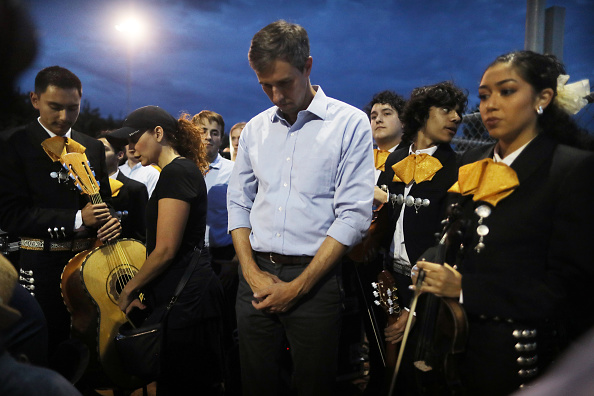 Here was the headline in the NYTimes this morning:

The headline is woefully inaccurate on a number of levels: The Times could have more accurately suggested that “Trump urges unity after his incendiary, divisive rhetoric leads to mass shooting,” or, even more accurately, “Trump feigns urging unity.” The NYTimes, presumably, saw Trump’s speech yesterday. I understand that they want to be “objective” and take his words at face value, but when the President looks like a man being held hostage when he reluctantly condemns white nationalism and gets fired up whenever he’s delivering divisive rhetoric, I think it’d be OK if the Times makes a judgment call based on three years of context and concludes that Trump is not being genuine in his call for “unity.”

I mean, it took him less than a day to revert to his familiar divisiveness, which was predictable to everyone. Here he is calling out Obama, who did nothing but release a statement calling for gun reform and calling upon Americans to reject the divisive, hateful, and racist language, which — I seem to recall — is exactly what Trump did in his weak-ass speech.

He just couldn’t help himself, could he? Meanwhile, he’s also going off on Google and showing support for a fella named Kevin Cernekee, who once tried to raise money to put an actual bounty on the guy who punched Richard Spencer. 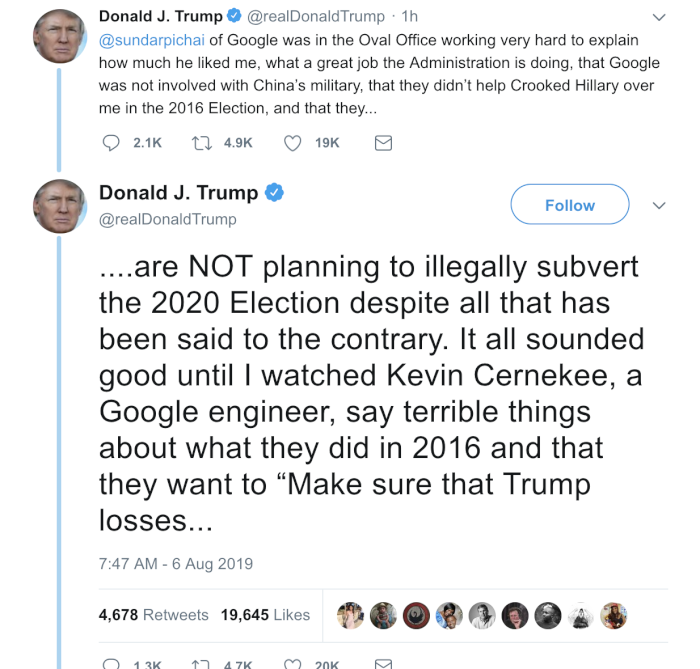 Unity, huh? You know better than that, NYTimes. The paper is getting creamed this morning on Twitter with a #CancelNYT hashtag:

We are tired. This is a long time coming. So many of us have been telling Times to do better. Like republicans they have us their asses to kiss too many times. I hope #CancelNYT works and I hope it's a lesson to other outlets. He's a liar and a racist…write the truth

I’m not gonna cancel the NYTimes myself — it still collects news better than anyone, even if it frames it hella wrong — but they do need to be held accountable. They need a public editor. (I might suggest Soledad O’Brien).

— Meanwhile, it took no time at all for Fox News to jump back on the “invasion” rhetoric, the very same rhetoric that led to a mass shooting in El Paso.

Fox & Friends pushes the shooter’s message to millions of viewers, including the president https://t.co/0d0sqbM0nV

— Finally, speaking of the NYTimes, in the wake of a mass shooting in his home town of El Paso, Beto O’Rourke is front and center this week on not only calling out the President’s white nationalistic rhetoric:

"The only modern western democracy that I can think of that said anything close to this is the Third Reich, Nazi Germany. Talking about human beings as though they’re animals, making them sub-human to make it ok to put their kids in cages.” — @BetoORourke pic.twitter.com/UzdZEEeAn2

Beto O'Rourke accused President Trump of inciting racism and inviting violence and said he is not welcome in El Paso. https://t.co/OGu9WMZbPV pic.twitter.com/odXhkX7IKZ

… but he’s also taking aim at the media for the way they are covering Trump:

Two mass shootings left 29 people dead this weekend in the US.

I’m not saying we should all jump on the Beto bandwagon, but in the last couple of days, he has been speaking my language (and that of a lot of our readers). He’s raw and genuine, and he’s resonating for me in all my happy places. I’m sure that I’m in the minority, but as someone who writes about politics near-daily, the biggest issue for me in 2020 is combatting the spread of white nationalism and holding the media accountable for its role in the spread of it. The media helped to create the divisions that led to the election of Donald Trump. Fix that, and a lot of other stuff falls into place.

Again, I’m not ready to jump on the Beto bandwagon, but I will say this — in a poll of registered voters in Texas, Beto O’Rourke leads Donald Trump by 11 points. As I have been stressing the last few weeks, there is no bigger prize right now for Democrats than Texas, because a win in Texas means we don’t have to worry about Florida and Wisconsin and Iowa or even Pennsylvania. A win in Texas means we can go to bed early on election night. So, for you “electability” people, let me just say this: Beto is a hell of a lot better choice than Biden.

It’s also worth noting that the fourth Texas Congressional Rep in the last few weeks retired yesterday, having seen the writing on the wall.