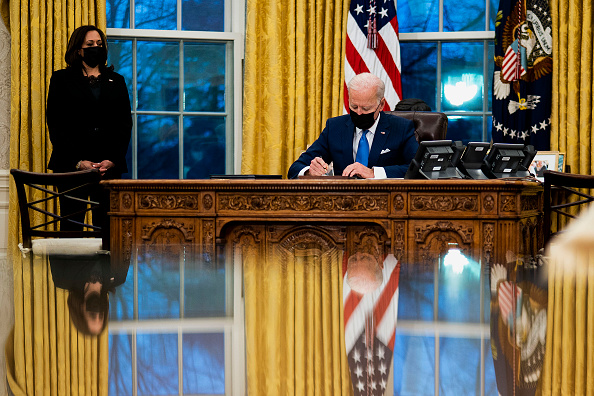 There’s a piece over on Politico this week about how progressives have warmed up to Joe Biden, and much of it cites Sean McElwee, the co-founder of the progressive think tank, Data for Progress. I only mention it because every time I see McElwee’s name, I remember that he wrote a defense of Justin Bieber for us about 7 years ago. Very smart guy, and I think at the time very ambitious (he was writing for Salon, and likely wanted to network with everyone in the left-leaning, indie sphere). He once also pitched a piece about the right-leaning hero narrative of The Lego Movie, its many Libertarian themes, and the “Hayekian concept of the distribution of knowledge,” and I thought, “Wow! Wasn’t Will Ferrell’s appearance a surprise?!”

Anyway, McElwee and the progressive left, so far, has been fairly pleased with Joe Biden, two weeks into his administration, and why not? Biden’s doing a heck of a job, and while he may need to tick right to pick up some GOP votes at some point, right now, at least, he is listening the party’s progressive base. Yesterday, in fact, he announced the end of U.S. support for the Saudi war in Yemen, much to the delight of anti-imperialist progressives. He also vowed yesterday to rebuild international alliances, he spoke harshly of Russia, and he’s re-entered the World Health Organization and vowed to help the poorer countries secure vaccines. He’s trying to expand healthcare; he’s going to cancel some student debt, and he’s strongly considering more than the $10,000 he pledged in the campaign; and he and Bernie tried to push through a $15 federal minimum wage just last night.

Unfortunately, despite Bernie’s pleas on the floor of the Senate at around sunrise this morning, the Democrats could not get Joe Manchin (or any Republican) to agree to raise the federal minimum wage during the pandemic, although the Democrats (with Harris’ tie-breaking vote) did give their support to Biden’s $1.9 trillion stimulus package (Pelosi vowed to pass the minimum wage hike outside of the stimulus package). Other than the minimum wage, keeping Israel’s embassy in Jerusalem, and denying direct payments to undocumented immigrants, the only other amendment the Democrats sided with the Republicans on was to deny high-income earners direct payments. What constitutes a “high-income earner” has not yet been established, I suspect that direct payments will start to be slowly phased out at around $50K for individuals and $100K for families, which is fine, because we are liberals, and not that kind.

What has been weirdly jarring for me, however, is the lack of all-caps tweets taking credit for all the actions that Biden has taken so far. He’s also not trying to shame people publicly into supporting him with political threats. Biden and Harris have been very quietly doing their jobs, while the Republicans continue to soak up most of the attention.

Last night, of course, the Democrats (and 11 Republicans) voted to strip that lady of her committee assignments, thus essentially robbing her of much in the way of power. Without that power, it will be harder to raise money. Will that matter when her primary comes around? I don’t know. She came in first in a five-way primary. Without power or money, I’d like to think that we won’t hear much about her anymore. I seriously doubt, however, that will be the case.

I will say that the vote did provoke a lot of memorable speeches on the floor, including this one from Steny Hoyer:

"They're not 'The Squad' They're Ilhan. They are Alexandria. And they're Rashida. They are people. They are our colleagues … this is an AR-15" — Steny Hoyer printed out one of Marjorie Taylor Greene's incendiary tweets pic.twitter.com/pXOmMtyrFs

.@RashidaTlaib's full emotional speech tonight "I ask my colleagues to please try not to be dehumanize what's happening. This is real. Many of our residents, from the shootings in Charlottesville to the massacre at the synagogue. All of it. All of it is led by hate rhetoric." pic.twitter.com/qORBFMIxCv

The Democrats will probably pay for this vote if and when the GOP takes back the House, but it was the right thing to do. Sometimes, that’s all you can do. I also appreciate that Biden has stayed out of it. The man’s keeping his head down and performing the job of unf**king America to the best of his ability. I’ve been very pleased.

A few other items of note:

— Smartmatic, an election software company, has sued Fox for $2.7 billion for defamation. Rudy and The Kraken have also been named, as have Lou Dobbs, Jeanine Pirro, and Maria Bartiromo. That is a lot of money; I believe it represents about two years’ worth of profit for Fox News.

— Johnson & Johnson has officially sought emergency authorization for its single-shot vaccine. A hearing will be held on February 26th, which might sound like a long time but it’s two days less than it took for regulators to study the Pfizer and Moderna data. Also, Nate Silver can jump up my ass.

This is just irresponsible and I dont get, at this point, why anyone listens to him beyond sports. He doesn't understand race, continues to tweet problematic things about covid. He's not a good journalist but he'll still sell books and get $$ because the industry is broken. https://t.co/X1T4mYb8lW

— I don’t like Ben Sasse, but I do appreciate that he continues to reject Trumpism.

Republican Sen. Ben Sasse to the Nebraska GOP State Central Committee: "You are welcome to censure me again, but let's be clear about why this is happening: It's because I still believe, as you used to, that politics isn't about the weird worship of 1 dude”pic.twitter.com/duz8JIJE7h