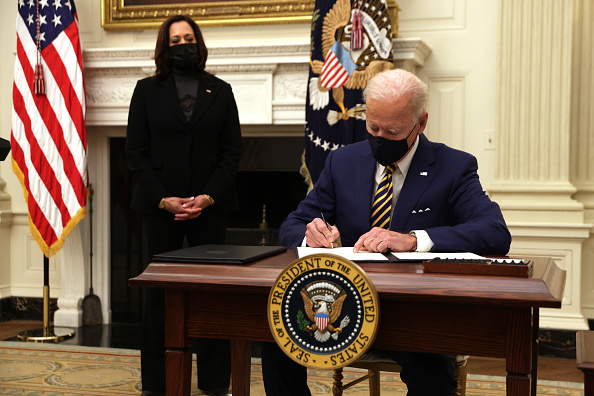 Morning Briefing: Biden Is Cruising, While His Predecessor is Fuming

Good morning. Let’s start the day off with news that Donald Trump is hate-watching TV and fuming about Anthony Fauci, and about the Biden Administration saying Trump had no vaccination plan, and how angry he is that he doesn’t have Twitter to respond … oh wait, I don’t care! I really do no f**king care! The only thing I care about with Trump is his impeachment, and any criminal and civil lawsuits filed against him. (Although, yes, fine, I do take some pleasure in how “bleak” the job market is for the aides who stuck by him the longest, including Mark Meadows, who is considering taking a job in the Trump Organization, because he’s got no other prospects).

Speaking of which, Dominion Voting Systems is now suing Rudy Giuliani for $1.3 billion for carrying out “a viral disinformation campaign about Dominion” made up of “demonstrably false” allegations. They also sued Sidney Powell for $1.3 billion. I hope they go after the ringleader, Trump, next, and maybe bring in the MyPillow guy, too.

Elsewhere, Sarah Huckabee Sanders officially announced that she is running for Governor of my home state of Arkansas. Sanders — who admitted to lying to the press about the Mueller Report — will probably win in Arkansas. I’m sorry, y’all. There’s lots of space up here in Maine. I don’t know what else to tell you, but the thought of seeing her on television every single day makes me ill as hell. I couldn’t even make it through the first 15 seconds of her campaign video.

In Florida, meanwhile, Rep. David Jolly — a Trump critic and former Republican — is also “strongly considering” a run for governor in 2022 as an independent. What I find most interesting about that story, however, is that 2,025 Republicans in three Tampa Bay area counties switched parties in the eight days after the Jan. 6 insurrection. That sounds like a lot, and maybe there is a path for Jolly (but also, maybe Jolly splits the vote with DeSantis and a Democrat can take back the state).

In Biden news, Biden will sign another executive order today directing the federal government to “buy American” for products and services. Sure! Why not? Trump also tried this, to be fair, but the thing is: A lot of American products rely on foreign parts, and America also relies on cheaply made goods overseas. I don’t know how practical a toothless EO will be on this front.

More meaningfully, Biden is expected to repeal Trump’s transgender military ban as soon as today. I think they waited a few days because they wanted to make the announcement along with the introduction of Lloyd Austin as the new Secretary of Defense.

Briefly, on the stimulus package: Republicans (including moderates) are not lining up behind Biden’s $1.9 trillion deal, so if Biden expects to pass it, he’ll have to do it over their objections. However, should he trim the package and probably maintain focus on the $1,400 in additional direct payments, he’d likely get some support from the GOP. Their biggest sticking point seems to be the $15 federal minimum wage. Bernie is saying, however, that if the Dems don’t have the 60 votes necessary for a bipartisan deal, they’ll use the Budget Reconciliation Act to send out those $1400 checks anyway with just the 51 votes needed for that.

In other words: Don’t count on a $15 minimum wage, but those direct payments seem likely.