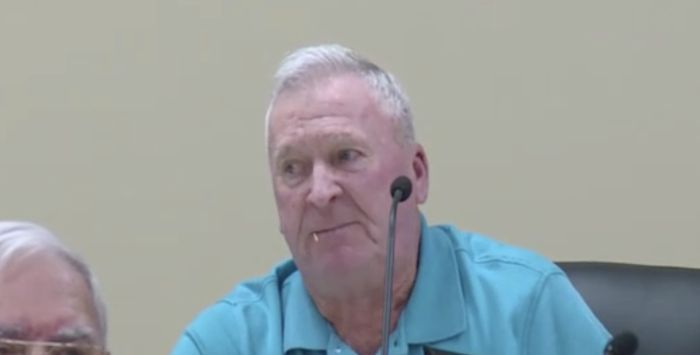 A long-time reader from Tennesee sent this to me earlier today, and I could tell she was from Tennessee because she said the video really burnt her toast. Bless. It burns mine, too.

A fella named Warren Hurst, who is the Commissioner of a Tennesee County where a Democrat hasn’t won since 1832, got a bug up his ass about the current state of affairs in America during a public meeting this week.

“It’s time, folks, that we wake up. We got a queer running for president if that ain’t about as ugly as you can get,” he said, while chewing a toothpick and leaning real hard into them Southern stereotypes. Although one woman walked out of the public meeting, several others people clapped and cheered. ‘MERICA.

“I’m not prejudice,” he said, which is the first thing a prejudiced person says before saying something prejudiced, “but by golly as a white male in this country has very few rights and they’re getting took more every day.” Hurst made the statement without a trace of irony while appearing as an elected official in a public meeting that was made up entirely of white people. The statement was also met with more whoops of agreement by the kind of men who attend public meetings to vote on resolutions to make their cities gun sanctuaries.

Those poor white men. You gotta feel real bad for them, getting all their rights plum took away. You can hardly go ‘round grabbing ladies by the vagina anymore without them radical socialists spouting off on the Twitters. You refer to a procedural mechanism allowed by the Constitution as a lynching just once, and every commie feminist in America jumps down your throat.

Despite his comments, Hurst succeeded in making Sevier County a gun sanctuary. So for those of you who often wonder how Trump could possibly maintain the support of 40 percent of America’s electorate, I believe you can find your answer in the toothpick in Warren Hurst’s mouth.

Now, if you’ll excuse me, I need to attend a rally for aggrieved white men forced to look at a gay every time we turn on the damn telly.


← Macaulay Culkin Looks Good as Hell 'Dancing' on Stage with Lizzo | Now You're Just Pissing Off the Prosecutors, Lori Loughlin →