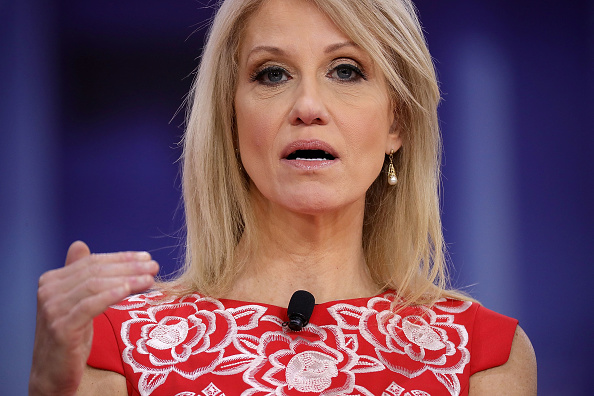 UPDATED: Kellyanne Conway Accused of Posting a Topless Photo of Her Teenage Daughter to Twitter

Last August, Kellyanne Conway resigned as a senior advisor to the President to “focus” on her family, after her daughter, Claudia, alleged abuse. Claudia cited physical abuse from her father, George, and verbal abuse from her mother, and she said she wanted to be emancipated.

That happened in August 2020, and with the exception of when Claudia hopped onto TikTok to dispute the narrative surrounding Trump’s bout with COVID (after Claudia’s own mother came down with it), we’ve kept our distance from what is clearly a deeply troubled family. In the intervening months, Claudia has continued to criticize her parents, upload videos of their interactions, and report on the state of their marriage (not good).

Last week, Claudia Conway posted a montage of abusive incidents with her mother. As parents, most of us have yelled at our kids. Most of us have lost our tempers (especially over the last year). Teenagers can be little sh*ts. This was different. It was clearly abusive, and there is a level of hostility directed toward Claudia that went way beyond what constitutes a reasonably angry parent. I grew up in abusive households. This was much closer to that than Mom getting angry with her rebellious teenage daughter.

It was bad enough that authorities were called in for a welfare check. Kellyanne Conway basically told them that they were going through a rough time (Claudia reports that her father, George, left the home after the Jan. 6th insurrection) and they were seeking family therapy. It was the second time police were called to investigate domestic disputes (the other call came on November 2nd). From what Claudia has posted to social media, the police were not sympathetic, and in fact, told Kellyanne to take away her phone so that Claudia couldn’t post evidence of these abusive incidents to social media anymore.

Last night, things escalated again, after Kellyanne posted a topless photo of her daughter to Fleets, Twitter’s Snapchat-like service. The photo was quickly deleted, but not before it was documented by Twitter users. Claudia, likewise, posted TikToks that have since been deleted confirming the authenticity of the photo. In one of those TikToks, Claudia suggested that her mother inadvertently posted it. “I’m assuming my mom took a picture of it to use against me one day and then somebody hacked her or something,” she said. “I’m literally at a loss for words. If you see it, report it.”

In another video, a visibly shaken Claudia Conway said, “nobody would ever have any photo like that, ever. So, Kellyanne, you’re going to fucking jail.”

I should note that Kellyanne might have accidentally posted the photo, but she intentionally took a photo with her phone of a topless photo of Claudia that was on Claudia’s phone. There would have been no reason to do that except, as Claudia notes, to use it against her daughter.

“My mom deserves to go to jail,” Claudia said in a different video. “That’s unreal. She’s the only person that has it.”

Our daughter Claudia asked me to tweet this statement for her. https://t.co/ilH7IFqERB

“I have faith and I know my mother would never put something like that on the Internet. My mother and I fight like mothers and daughters, but we also love like mothers and daughters, and I do love her,” Claudia Conway stated, before noting that she would be taking a break from social media “to work on my relationship with my mom and my family.” She asked that no calls to authorities be made, or threats against her family.

← Chuck Schumer Gets the Best of Mitch McConnell, or Does He? | The 2021 Independent Spirit Award Nominations →