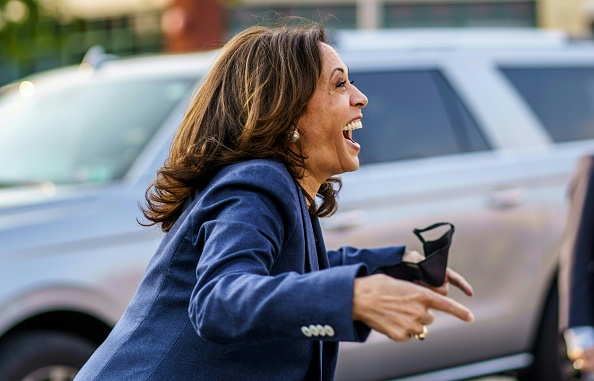 Look: I’m not trying to suggest that I would vote for someone based on their shoewear, and I’m a little embarrassed that after I saw Kamala bounding out of a plane in Chuck Taylors that I also ordered a pair from among the styles that remained because there were a lot of sold-out Converse All-Stars today. And yet, after watching two old dudes dominate the airwaves for the last six months, and Biden and Trump bicker among each other about who has the most vitality and/or who is the least senile, it was just such a pleasure to see Kamala in Chucks walking with so much jubilance. I was not alone in my affection for this, either. Hell, even The Guardian wrote about those sneaks:

It is a small sartorial detail, but it is linked to the larger cultural moment in which we live. “Sneakers are a form of footwear finding their way into many women’s closets as part of a larger challenge to outmoded concepts of femininity,” says Elizabeth Semmelhack, the author of Sneaker X Culture: Collab. Traditionally, there is a standard shoe etiquette for women in political office - either alpha (see: Nancy Pelosi’s stilettos, Theresa May’s leopard print heels) or conservative (Elizabeth Warren’s slide sandals, Hillary Clinton’s pantsuit-matching kitten heels). Semmelhack believes Harris’s shoes signal action. “The sneakers are acting as the sartorial equivalent of being willing to roll up her sleeves,” she says. They suggest Harris “is a woman of action”.

Kamala Harris arrives in Milwaukee for meetings this afternoon in her black hightop Chuck Taylor Converse LIKE A BOSS. pic.twitter.com/auSGfTYkso

Why have I watched this video of Kamala Harris deplaning in Milwaukee wearing Chucks and a face mask 1 million times? https://t.co/OODT4Osg1j

VP to be, Kamala Harris walking off the plane like the boss — in her Chuck Taylors.pic.twitter.com/SSxfYO6Qx0

That feeling when you realize the future Vice President of the United States owns the same pair of high top black leather @Converse Chuck Taylors as you.@KamalaHarris is truly for, by and of the people. pic.twitter.com/DXhK0U41m4

Kamala rocked Chuck Taylors on a campaign stop in Wisconsin and they’re already selling out online.

Kamala Harris bounding off that plane in Chucks is everything I needed this #LaborDay.

There's my Senator from California, the next VP of the USA, bounding down the stairs in her Chucks, ready to kick ass and take names in Wisconsin! Go, Kamala, gooooooooooooo! You're an action hero come to life in this clip! https://t.co/2cLXVZHGUv

I don’t have anything else to add, except how profoundly refreshing seeing this has been.

← Twitter Users React to the Unholy Circus that is the 'Adult TikTok House' | Jason Momoa Lets Warner Bros. And The Rest Of The World Know That He Stands With Ray Fisher →