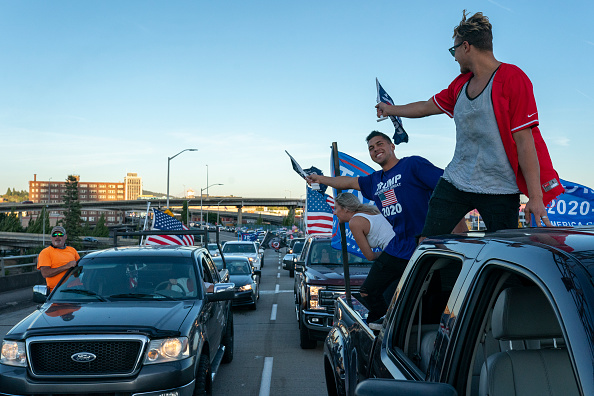 It's the Coronavirus, Stupid

For those of you who may not remember, Bill Clinton’s campaign manager in 1992, James Carville, ran Clinton’s campaign on a very simple message: “It’s the economy, stupid.” Clinton was able to effectively neutralize all of his other problematic issues by zeroing in on the thing that mattered most to Americans at the time: The economy.

Biden needs to do the same right now, only instead of the economy, he needs to zero in on the Coronavirus and health care in general. At the moment, Trump is trying to do everything in his power to distract us from it, most recently not only commenting on the violence in Portland, Oregon, but by stoking it. It feels like there’s a mini Civil War playing out in Portland between activists and Trump supporters, most of whom I am sure — like Kyle Rittenhouse — have traveled from other places specifically start sh*t with protestors in a city these people do not give a sh*t about. Trump supporters shot paintball guns from their trucks. A right-wing Trump supporter was also killed in the violence over the weekend, violence — again — that Trump is encouraging for one reason only: Because it takes our attention away from a virus that has infected over 6 million people and killed 183,000 in America.

Meanwhile, Trump is retweeting conspiracy theories that emerged over the weekend about the “true” toll of the virus, suggesting that only 9,000 people have actually died of Coronavirus. This right-wing conspiracy theory, which I have seen spread like wildfire on social media and in comments section cross the Internet. The theory is based on the CDC’s own figures, showing that only 6 percent of the Coronavirus deaths occurred in those who did not have comorbidities, while the rest of those deaths occurred in people with at least one underlying condition, including obesity, which accounts for 60 percent of Americans. This theory seems to suggest that 170,000 of the people who died of Covid-19 would have died anyway, which is not only completely wrong but cruel as hell. Forty percent of our country has officially adopted the, “F*** ‘em” attitude.”

I died of covid but here’s why it’s not as bad as you’re hearing pic.twitter.com/W0dJpYjBLG

Meanwhile, while schools are reopening, the rates are rising fast among children, not including the 26,000 cases among college students as of last week.

What is Donald Trump doing about it? Besides downplaying it, and endeavoring to open up everything as quickly as possible? Apparently, he’s taking advice from Scott Atlas, one of his medical advisors, who is pushing herd immunity. From the Times:

One of President Trump’s top medical advisers is urging the White House to embrace a controversial “herd immunity” strategy to combat the pandemic, which would entail allowing the coronavirus to spread through most of the population to quickly build resistance to the virus, while taking steps to protect those in nursing homes and other vulnerable populations, according to five people familiar with the discussions.

In other words, he’s pushing the Swedish model, which so far has been a complete failure and they are still nowhere near herd immunity. Atlas, by the way, has no infection disease training.

Scott Atlas, the radiologist recruited to the admin after downplaying the pandemic on Fox News has been pushing for herd immunity. To achieve this without a vaccine, about 250 million Americans would contract the virus and 1.5-2 million would die. https://t.co/V1eqm9sVsF

183,000 dead and six million infected, while a second wave is looming. Donald Trump could not give less of a damn. He’s only interested in being reelected, even if that comes at the expense of more lives lost, even if that means encouraging more of his supporters to use violence against BLM activists. No death count is too high.

The good news is: Biden seems to understand.

Joe Biden: "This is a sitting president of the United States of America. He's supposed to be protecting this country, but instead he's rooting for chaos and violence. The simple truth is Donald Trump failed to protect America, so now he's trying to scare America."

Biden: "You know me. You know my heart, you know my story … ask yourself: do I look like a radical socialist with a soft spot for rioters? Really? … the simple truth is Trump failed to protect America, so now he's trying to scare America." pic.twitter.com/P8c9BTG0B1

This is a strong speech by Biden. He could’ve easily sounded defensive, but instead he made this a referendum on Trump’s handling of race relations, public safety, and the pandemic, where the incumbent continues to have very low ratings. https://t.co/MDsl2HCbeT


← Netflix Unveils 'The Haunting of Bly Manor' Teaser Trailer (A.K.A. 'The Haunting Of Hill House Season 2') | What's Next For the New Era of Megan Fox? →