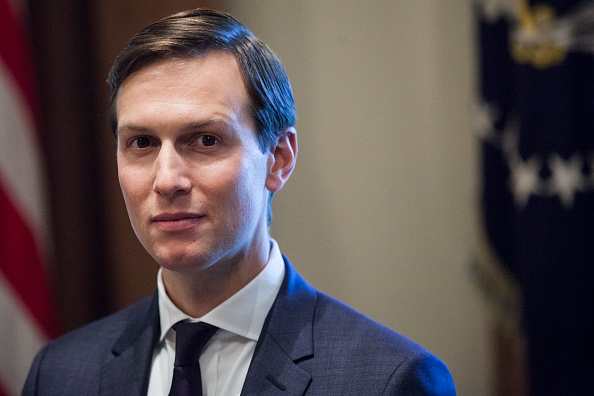 Trumpdates: Give It a Rest, Nikki Haley

10:25 — Nikki Haley really is out there both trying to promote her book and lobby to be Trump’s VP choice. Here’s what she said on the Today show this morning:

"In every instance I dealt with him, he was truthful" — Nikki Haley suggests Trump never lies pic.twitter.com/XtkYwjnkNm

Fun fact: Until 30 damn seconds ago, I had forever assumed that the blinking white man GIF was of Peter Krause. I have just realized that is not Krause, and my mind has been blown.

Also, wow, Nikki Haley. Wow. Ambition is a hell of a drug.

Nikki Haley on NBC just now insisting Trump is a “truthful” president and tougher on Russia than any previous president. She appears to be all in.

There is a conspiracy theory going around that was floated last week by the Spectator and The Daily Mail — and I want to reiterate that it is a conspiracy theory — that Jared Kushner gave the greenlight to Saudi Arabia’s Mohammad Bin Salman Al Saud to arrest Jamal Khashoggi, The Washington Post journalist who was murdered by the Saudis in the Saudi embassy in Turkey. That conspiracy theory also suggests that Turkish intelligence intercepted that call, and that Turkey’s President Erdogan used that information as leverage to pressure Trump to pull U.S. troops out of Syria, which ultimately led to the deaths of untold numbers of Kurds and a total realignment of the Middle East. There’s even a suggestion that there’s a U.S. whistleblower familiar with the details.

Again, this is a conspiracy theory, and as easy as it might be for us on the left to believe it, there is no publicly known facts to back up the theory. The source here is someone at the Spectator who goes by the name of Cockburn, who — best I can tell — is someone who traffics in political gossip.

In other words, it’s all rumor, gossip and other innuendoes.

And yet, this morning, The New York Times is running a piece that seems to dance around that very conspiracy theory without directly mentioning it. The story is about “an unusual back channel” of sons-in-law, which includes Jared Kushner, Berat Albayrak — Erdogan’s son-in-law and finance minister — and a Turkish business, Mehmet Ali Yalçındağ, who is the son-in-law of a Turkish billionaire tycoon, Aydın Doğan. But the piece also brings up Kushner’s back-channel relationship with Crown Prince Mohammed bin Salman of Saudi Arabia. Khashoggi, to be sure, is never mentioned in this piece, but the NYTimes talks at length about how deals are made between the United States, Turkey, and Saudi Arabia through Kushner’s back channels, deals that often confound even Republicans (because they go against American policy). Erdogan, like Trump, feels that this “backdoor diplomacy” is necessary to avoid the “obstruction” of the American “deep state,” i.e., our intelligence community.

Does this piece in any way confirm or support the conspiracy theory? No. Is it odd that it comes out one week after the Spectator piece? Maybe. Do we understand yet exactly why Trump decided to abruptly pull out of Syria, abandoning one of our strongest allies as that ally was helping us to track ISIS leader Abu Bakr al-Baghdadi? No, we do not.

Just like Schiff fabricated my phone call, he will fabricate the transcripts that he is making and releasing!

I’m not trying to start sh*t here — I am not Louise Mensch — and I have ignored the conspiracy theory thus far. I am not saying I believe that theory, but I do think that the timing of the NYTimes is odd, to say the least. A conspiracy theory surfaces about back-channel diplomacy between Kushner, Erdogan, and MBS, and then the Times runs a piece, more generally, about how back-channel diplomacy is conducted between Kushner and Erdogan’s son-in-law that also mentions MBS. It’s almost like the Times wants to get in on that story without actually getting in on that story.