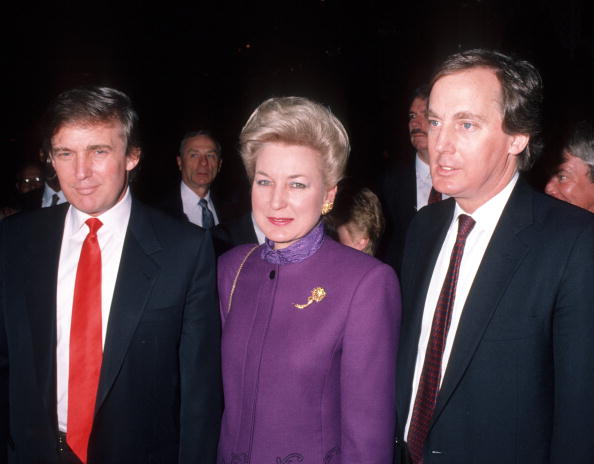 In Secretly Recorded Audio, Trump's Sister Unloads On the President

In the course of researching her book, Donald Trump’s niece, Mary L. Trump, secretly recorded her aunt, Donald Trump’s sister, retired federal judge Maryanne Trump Barry. Privately, Barry is clearly not a fan, saying that Donald has “no principles” and his performance as President has been embarrassing.

“His goddamned tweet and the lying, oh, my God,” she said in one of the recordings posted obtained by The Washington Post. “I’m talking too freely, but you know. The change of stories. The lack of preparation. The lying.” She insisted that Trump only tried to appeal to his base. “And his base, I mean my God, if you were a religious person, you want to help people. Not do this.”

The recordings formed the basis of some of Mary’s book, Too Much and Never Enough: How My Family Created the World’s Most Dangerous Man, although some of Barry’s observations did not make it into the book. In the recordings, Barry repeated the claim that someone took the SATs so that Donald Trump could get into the University of Pennsylvania.

Trump also apparently used a connection to Reagan in the ’80s to float Maryanne Barry’s name as a federal judge and repeatedly lorded it over Barry. “You say that one more time and I will level you,” Barry said at one point, angry that Trump continued to take credit for her accomplishments.

“He was a brat,” Barry said at another point. “I did his homework for him” and “I drove him around New York City to try to get him into college.”

“Donald is out for Donald, period,” Barry said.

Mary questioned Barry about what he had accomplished on his own.

“Good point. He did accomplish those all by his self,” Mary said.

In another instance, Donald was incredulous about the fact that Barry read books instead of watched Fox News. Maryanne Barry also said that she doesn’t want Donald to speak at her funeral, because he was the only person at their father’s funeral who spent all of his speaking time talking about himself.

“Every day it’s something else, who cares,” the President responded in a statement. “I miss my brother, and I’ll continue to work hard for the American people. Not everyone agrees, but the results are obvious. Our country will soon be stronger than ever before.”