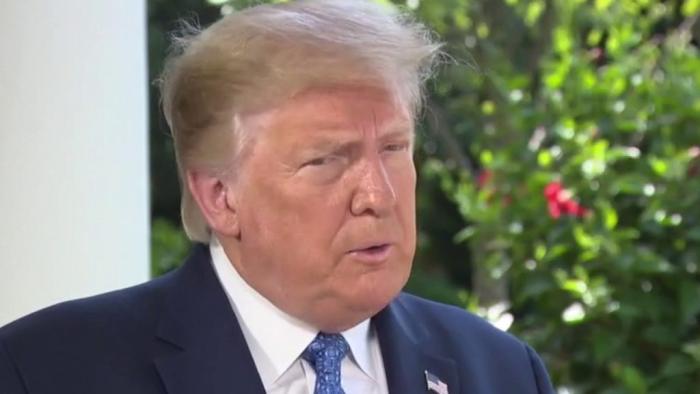 Every day you wake up and you read the news and you ask yourself again, what the f*ck is going on? What timeline is this? We live in a strange era. To wit: For at least the third time this month (once with Hannity, once with Chris Wallace, and now in a segment that originally aired on Tucker Carlson, I believe), Donald Trump is openly bragging about passing a cognitive test. It is not an IQ test, mind you. It does not test one’s intelligence.

It is a 10-minute test designed to detect mild cognitive impairment such as the onset of dementia, and Trump is devoting an extraordinary amount of time to discussing his results, especially after Chris Wallace challenged the President over the weekend, rightfully saying that the test is not difficult. Trump, however, insists that the last five questions on the cognitive test were challenging, and explains as much in painstaking detail in this clip:

Transcribing that clip makes it sound even more absurd. Read this:

“‘OK, that’s very good. If you get it in order you get extra points.’ OK, now he’s asking you other questions, other questions, and then, 10 minutes, 15, 20 minutes later they say, ‘Remember that first question — not the first — but the 10th question? Give us that again. Can you do that again?’”

“They said nobody gets it in order. It’s actually not that easy, but for me, it was easy. And that’s not an easy question. In other words, they ask it to you, they give you five names and you have to repeat ‘em. And that’s OK. If you repeat ‘em out of order, it’s OK, but, you know, it’s not as good. But when you go back about 20, 25 minutes later and they say go back to that — they don’t tell you this — ‘Go back to that question and repeat ‘em, can you do it?’ And you go: ‘Person. Woman. Man. Camera. TV.’

“They say, ‘That’s amazing. How did you do that?’ I do it because I have, like, a good memory, because I’m cognitively there. Now, Joe should take that test, because something’s going on. And, and, I say this with respect. I mean — going to probably happen to all of us, right? You know? It’s going to happen.”

The man is bragging — bragging — about his ability to remember five things. The man believes that passing a test designed to detect dementia makes him more qualified to be the President than Joe Biden. Extraordinary. And get this: The doctor who interviewed Trump came onto Fox and Friends and, well, this is how he spun that clip.

If you're curious how F&F is spinning it.

Marc Siegel: "In a sense, that interview was a cognitive test… he extremely sharp on every second. And he did a test on TV where he basically, you know, went through how great his memory is." pic.twitter.com/K3W7q4XROo

I should note, too, that while the President could apparently remember five objects, he could not seem to remember when he took the test. Last year, two years ago? Whenever?! He says that he “recently” took at Walter Reed National Military Medical Center, but he also says that he asked Dr. Ronny L. Jackson for the test, though Jackson has not been his doctor since 2018, so it wasn’t “recently,” or “in the last year,” as Trump has suggested, though to be fair to him, no one understands time anymore.

But also, that particular test has also been criticized for its inability to rule out declines in reasoning or memory, or difficulties with planning or judgment. And the biggest irony is: Trump is trying to focus attention on Biden’s mental health by bringing up this exam, but all it does it focus the attention more on his own clearly declining mental acuity.

Only someone, who paid his whole life for others to do hard work for him, could think that remembering 5 objects in order is difficult. Nobody told Trump how school works? #CognitiveTest

Color the American flag. *Hint - if you're having difficulty - refer to your lapel pin. #CognitiveTest pic.twitter.com/Zrok7QnJrm

#CognitiveTest
I work with the MOCA quite a bit. It's only given when you suspect Dementia. It's not a test to assess if you're a stable genius. God the man is a moron.

What is something Trump has verbally, physically or sexually assaulted?

This is a Jeopardy question right?