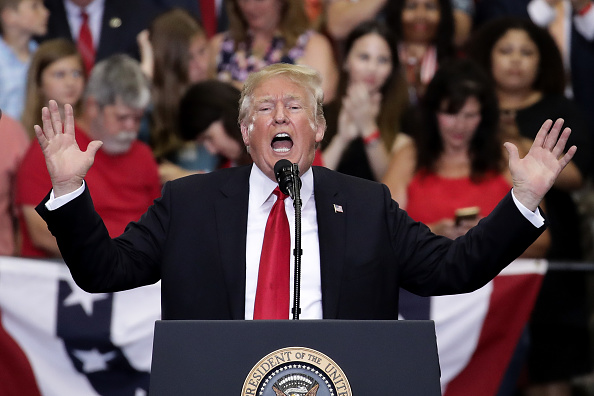 Have you seen this guy, Donald Trump? What a joke this guy is, am I right? What a joke. What do you think is wrong with him? That guy can barely string a sentence together. You think he’s OK? I don’t know if he’s OK. Seems like he’s not quite right in the head, if you know what I mean? I don’t think he’s all there. Maybe he’s missing a few marbles. Why is he always sniffing, anyway? *sniff sniff* What’s up with that? I heard he’s a speed freak. I don’t know if it’s true, but that’s what people tell me. They say he crushes up Adderall before all his speeches, which is why he’s always sniffing and slurring his words. That’s what I hear, anyway. That’s what people tell me. Someone should look into that. Check his medicine cabinets.

Can you believe what this guy did in Iran? We had a perfectly good deal with them and he ripped it up. Was it perfect? No. No deal is ever perfect, but this guy, Donald Trump — Donny Trash, as I like to call him — he rips up the agreement. Who does that? And he has no plan. And then he gets himself impeached, and you know what Little Donny Trash does? He tries to start a war with Iran. He drops a bomb on some guy named Qasem Soleimani. He makes up a bunch of lies, and then he drops a bomb, and now he’s out there lying about why he dropped the bomb. It’s a disgrace. It’s shameful.

You know, 200 people died in that plane that got shot down by an Iranian missile. Terrible tragedy. 300 people. Most of them students. Good, smart kids. Lots of ‘em from Can-a-da. Terrible tragedy. And if you think about it, that’s Donald Trump’s fault. Did he fire the missile? No, but if he hadn’t been messing about in other people’s affairs to try and hide his own disgraceful conduct, those 350 students would still be alive today. I heard most of them were Ph.D. students. Future of the planet right there. One of them might have cured cancer, but it’ll never happen now. Never happen now. Because Donald Trump was trying to distract everyone from one mistake with another mistake. What a disgrace.

You hear Justin Trudeau last night? Good guy. Great friend. One of America’s best allies. Terrible tragedy he had to tell his country about. 400 students, doctoral students most of them. And Trudeau didn’t come right out and say that it was Donald Trump’s fault, but you know that’s what he was thinking, am I right? That it was all Donald Trump’s fault.

So, you have Donny Trash. I mean, give me a break. Can you believe Donny Trash? This guy is going to win another four years? Give me a break. This human scum? This guy who is cozying up with the Nazis and the white supremacists? Who says ‘both sides’ when the Nazis are yelling ‘Jews will not replace us.’ These people are bad people. Bad guys. Bad hombres. But Donald Trump, he thinks these Nazis are no worse than anyone else. Can you believe that? I say we get rid of these Nazis. These white supremacists. We lock ‘em up. But Donny Trump, good ole’ Donny Trash, he thinks they’re just fine. He won’t speak out against them because he knows that he needs their votes. Because Trump knows that the only way he can win is with the help of the Nazis, and the Russians, and the white supremacists. That’s the truth, ladies and gentlemen. The radical Republicans have never been more racist than they are right now. They are stone-cold racist. It’s true. It’s true. And Donald Trump’s policies are a disaster. He’s a bad guy, and he has horrible policies. But I’ll tell you this: He’s vicious. He’s a vicious, horrible person. He’s a horrible person. What he does to people is a disgrace. Pathetic. And he and the Republicans are taking their cues from Mr. KKK himself, Stephen Miller. From Putin. And Ted Cruz and Mitch McConnell. Remember that guy, standing in front of the Confederate flag, accepting an award from the KKK. What a group. And Ted Cruz? Wow. Remember when Donald Trump made fun of the way his wife looks? And said his dad killed JFK? And what did Ted Cruz do? Did he fight back? No. Of course, he didn’t. Because he’s afraid of Donald Trump. They all are.

And they are the leaders of the party. Racists and white supremacists, and they don’t care much about women, either. How many women has Donald Trump assaulted? Oh, I’m sorry. Is that not politically correct. “Allegedly” assaulted. I mean, come on, give me a break. What is it? 15 women? 19 women? 30 women? Something like that? President Grab Her by the P*ssy. Pathetic. And did you hear this? He’s scared of stairs. Can you believe that? No wonder President Bone Spurs dodged the draft. He can’t even walk down a flight of stairs, he’s so scared. But does the fake news media report that? What about his addiction to speed? You know I heard that he had Epstein killed. I’m not saying it’s true, but that’s what I heard. Someone should investigate that. Why would the President of the United States want Jeffrey Epstein dead? What did Epstein have on Donald Trump? That’s what the fake news media should be looking into.


← The Dumping Ground: Why is January Such a Bad Month For New Movies? | A New Buyer's Guide to the Best Nintendo Switch Games →