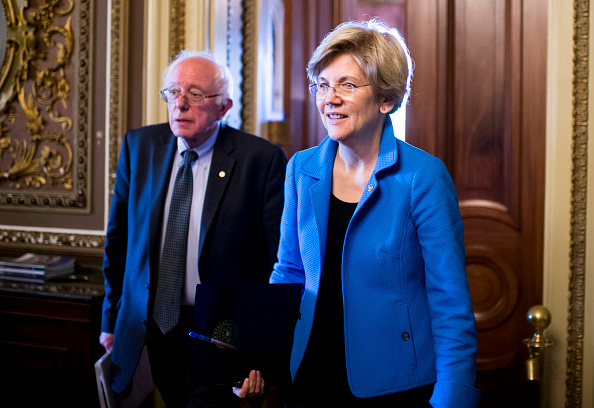 I have been Team Warren for a very long time now. I’ve contributed to her campaign. I wear my Elizabeth Warren T-shirt proudly. I politely decline when her team asks me to canvass in New Hampshire because I have three kids with busy weekend schedules, but importantly, I do not hang up on the volunteers (I wouldn’t give the time of day to a Biden volunteer). But here lately, I have admittedly been giving a lot of thought to Bernie, and it’s for purely pragmatic reasons. 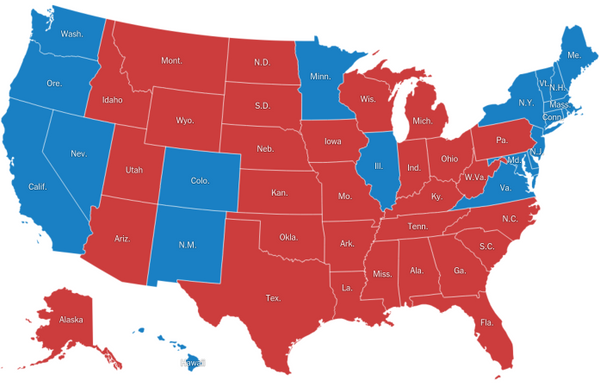 See those blue states? They’re not gonna change. They are solid blue, and they will almost certainly remain blue regardless of who the candidate is for the Democrats. Therefore, if we are going to rule out a landslide in favor of the Democrats — which is possible, but unlikely — the way I see it, there are four battleground states, and the Democrats have to win three of them: Michigan, Wisconsin, Pennsylvania, and Florida. If the election were to be held today, based on the current polling, Joe Biden wins all four, eking out an infinitesimal victory in Florida. I will happily accept that as an alternative to Trump.

But I am a progressive, and I would prefer a progressive candidate. The problem is, the Electoral College is dumb, but we’re stuck with it. Can a progressive candidate win those battleground states? Well, neither Sanders nor Warren can win in Florida (based on current polling), which means they must sweep Michigan, Wisconsin, and Pennsylvania, where Hillary lost by a combined 70,000 votes or so. According to polls right now, Sanders and Warren are leading in Pennsylvania and Michigan over Trump (Sanders handily). Unfortunately, only Sanders is beating Trump in Wisconsin, while Warren trails him.

Could that change? Oh, absolutely! Will it change? I don’t know. Yesterday, a big stink was made by the media over comments Bernie Sanders said in 2018, telling Elizabeth Warren that a woman could not win the Presidency. Warren says Bernie said it, Bernie says he didn’t. The reporting on this from CNN, The Times, and the Post is all over the place. It’s sufficient to say that Warren says that Bernie said it, Bernie disagrees and says that he said Trump would weaponize anything he could. The media definitely does want to make a big deal out of it, Warren does not, and she would much rather highlight all that Sanders and Warren have in common.

(Correction: I have since noted the inconsistency in reporting regarding the sources to the 2018 conversation between Warren and Sanders.)

(Publisher’s Note: As we head into the thick of the election years, I would like to note the obvious: The Pajiba Staff is made up of numerous writers with varied opinions. We do not speak with one voice. We all agree that we do not want another four years of Donald Trump but beyond that? There’s a lot of disagreement, and therefore, you may see pieces that disagree or contradict one another. Hopefully, however, you will not see any pieces in which the opinions of others are not respected.

← Yes, January Jones Did Date That Guy From 'The Bachelor' | Stephen King Reveals His White Privilege with Academy Award Comments →